Venom Blog Tour: An Excerpt from “Venomous” by Fiona Paul

Today, we are taking part in the Venom blog tour, celebrating the release of the debut YA historical novel from Fiona Paul. Each stop on the tour reveals a new excerpt for “Venomous” – a short story prequel to the events in Venom (featuring a courtesan and her tragic fate). We’re thrilled to bring you the next portion of the story – check it out, below! If you missed the last part of the story, read it on Adventures of a Book Junkie. 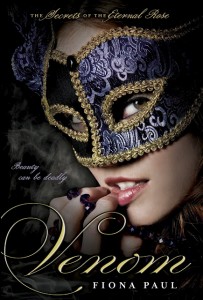 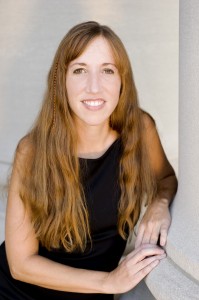 Venomous
A Secrets of the Eternal Rose short story

The year is 1600 and the streets of Venice, Italy are ripe with intrigue and danger. In this introduction to the world of Venom, eighteen-year-old Mariabella has recently elevated herself from the rank of common prostitute to the status of courtesan, a respected high-class escort for those men in Venetian society who can afford them. Mariabella steps out to attend a party on the arm of her powerful new patron, certain that the night will be filled with glamour, secrets, and adventure.

My heart suddenly beats tiny and fast against my ribs, like a mouse clawing at the bars of a cage. I’m not afraid of corpses as long they’re tucked safely away where they belong, but I can’t imagine going inside the crypt. The darkness. The smell.

It makes me think of growing up on the Giudecca, of the plague-ridden bodies piled high and burned, the odor of decay spreading across our village. “I don’t want to,” I say. “I’ll get dirty. Besides, the place is probably full of bats.”

As if on cue, a pair of them wing by overhead, their leathery forms crossing in front of the hazy moon. I dig my fingernails into the flesh of Batista’s hand.

“That means I win, you realize.” He laughs. “I can’t believe you’re scared.”

“Only a little,” I admit. I snuggle close to his side so he can play the protector. “Why is it that you’re not afraid?”

“I am no stranger to the dead,” he says softly. The mirth fades from his voice. He’s still staring at the open tomb, his face unreadable.

Immediately, I feel guilty. I do not know much of Batista’s history, do not know whether any of his family is alive. So many people were killed in the latest outbreak of plague. I would not be surprised to learn he was all alone. I hope I haven’t ruined our evening by resurrecting sad memories.

Pulling him past the open crypt, I pause before a tomb that has a low, flat roof and thick ivy covering the sides.

Hoping to lighten the mood again, I flash him a smile. “Do you dare me to climb?”

It seems to work. Batista laughs. “All right, I’ll give you a second chance.” He laces his fingers together. I put one of my feet in his hands and reach up to grab the edge of the tomb’s overhanging roof. Batista boosts me skyward. Sliding on my belly, I dig my fingernails into the stone and manage to pull myself onto the roof.

He looks up at me admiringly. “Not bad.” He digs one foot into the crack between two stones and leaps with his other foot, his fingers easily gripping the top corner of the crypt. In one smooth movement, he lifts his upper body up and over the side of the tomb.

We stand together, looking out over the graves. I hold in a giggle as I squeeze Batista’s hand. My earlier fears are almost completely forgotten. Many men I have known have requested that I meet them in unusual places, but none so strange as this. The moon peeks out from behind the clouds. The world is silent except for the occasional scratching of shrubbery against stone.

For the next part of the story, visit Oh! Paper Pages tomorrow, 10/25.

Fiona Paul lives in the Midwest but travels a lot since she can’t breathe if she spends too much time away from the ocean. She graduated from Washington University in St. Louis with a major in psychology and spent a year teaching English in Seoul, Korea while she was deciding what she wanted to be when she grew up. Answer: everything. In addition to being a teacher and a writer, she’s also worked as a sauté cook, sporting goods manager, veterinary assistant, and registered nurse. When she’s not working, you can usually find her kayaking, reading, or helping turtles cross the road. Her future goals include diving with great white sharks and writing more books, not necessarily in that order. Venom is her first novel.

Make sure to stop by later today, as we review Venom!

The Dinosaurs are Coming! Exclusive Art Sketch from The Dinosaur Lords

One Wish Blog Tour: Michelle Harrison and The Magical History of Spinney Wicket