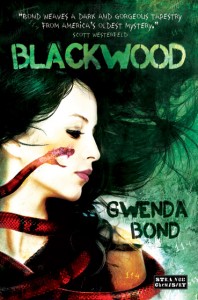 On Roanoke Island, the legend of the 114 people who mysteriously vanished from the Lost Colony hundreds of years ago is just an outdoor drama for the tourists, a story people tell. But when the island faces the sudden disappearance of 114 people now, an unlikely pair of 17-year-olds may be the only hope of bringing them back.

Miranda, a misfit girl from the island’s most infamous family, and Phillips, an exiled teen criminal who hears the voices of the dead, must dodge everyone from federal agents to long-dead alchemists as they work to uncover the secrets of the new Lost Colony. The one thing they can’t dodge is each other.

Blackwood is a dark, witty coming of age story that combines America’s oldest mystery with a thoroughly contemporary romance.

How did we get this book: Review copy from the publishers

Why did we read this book: Oh man, we have been waiting anxiously for this book for ages. It has one of the most awesome covers of 2012 (no kidding, we even were part of its official reveal) and a fabulous-sounding premise. It is also the first release by Strange Chemistry, a really exciting new imprint.

On Roanoke Island, hundreds of years after the disappearance of the infamous Lost Colony’s 114 (one of America’s oldest mysteries), the sudden disappearance of 114 people in the present day is the set up to a story that mixes history and fantasy as well as alchemy, curses and romance.

Two teenagers are deeply connected to this mystery. Miranda, a lonely girl from the infamous, cursed Blackwood family (discriminated against by all) and whose deadbeat father is one of the missing; and Philips, a boy who has heard voices of the dead inside his head and who knows that he can help solve this mystery and protect Miranda.

Blackwood has a fabulous premise going for it and the mystery is – at least to start with – quite intriguing. In fact, wanting to find out what happened to these people and why is what kept me reading till the end. The concept of the novel and its combination of historical events with Fantasy is engaging but unfortunately – and this truly pains me to say, as I had been anxiously waiting for Blackwood for a while now – not well executed with quite a few contrivances and nonsensical plot developments.

For example: as I read, I stumbled onto questions I couldn’t avoid asking. Miranda and her family have been discriminated against, labeled as freaks and as carriers of a curse their entire lives. WHY. I mean, if you think about it: if the entire old colony has disappeared (without spoiling too much: all but two people actually), how would anyone know about the Blackwood’s curse? More to the point: why wouldn’t the “cursed” family not know the nature of their own curse especially considering that they had a mission to carry out through the ages? It just seems like a contrived way to build unnatural conflict to me and to keep the main character in the dark for the entire book. I just couldn’t understand why the current inhabitants would hate the Blackwoods so much.

It also doesn’t help that the book features that sort of villain that wants immortality at any cost. Which is fine in itself but I can never understand why wanting immortality also translates into taking control over the world. Of course, there is a concrete plan to ensure the former but no plan to accomplish the latter and it is hard to take a villain seriously when all they want is to play a really long game of Risk for no particular reason.

Blackwood also features a romantic plotline that nearly drove me to distraction. On the up side: I liked the main characters. Miranda is a cool geeky girl (whose unfortunate tendency to say “frak” all the time probably dates this book too much) and Philips is actually an adorable good boy. On the downside: theirs is an inta-love that feels forced and therefore detracts from the reading experience. I mean, Miranda’s father has been murdered, she is all alone in the world, under a horrible curse that probably means her death and yet there are romantic thoughts toward Philips in the most awkward moments and this proved to be extremely jarring. And oh, the near-kisses drove me insane. I loathe those – and they are like a regular feature of romantic YA. How many times can a couple realistically “stumble” out of a kiss?

I’ve been anxiously waiting for Blackwood and perhaps my reading experience suffered under the weighty pressure of too high expectations. It happens. In the end though, as much I would love to be able to, I can’t really recommend it (I am weeping inside).

Unfortunately, my experience with Blackwood echoes Ana’s. While I love a new take on the missing colonists at Roanoke and I appreciate some of the underlying concepts of Blackwood, the novel is deeply flawed in terms of writing, plot development, and character motivation.

Blackwood is built around the historical fact of the missing colonists of Roanoke Island – you know, Sir Walter Raleigh, 114 missing colonists, “CROATOAN” carved on the tree and all that. Many an author has taken a stab at the story of the missing colonists, and in Blackwood, Gwenda Bond sets the story on Roanoke in present day – when 114 residents mysteriously disappear, just as their predecessors did, hundreds of years earlier. The reason for the disappearing colonists and present-day residents is a mystery that can be unlocked only by two of the original colony descendants – Miranda Blackwood and Phillips Rawling. Miranda is branded as an outcast to her fellow islanders by virtue of her last name (despite being uncommonly beautiful, of course), and Phillips hears voices of spirits in his head whenever he’s on the island – and so to save his sanity, he’s concocted an elaborate scheme of getting into enough trouble that his family is forced to send him away to boarding school off Roanoke (of course, his troublemaking is all a front and he NEVER gets caught unless he wants to be caught. He’s that guy.).

In principle, despite the stock quality of these two characters, I like the idea of Miranda and Phillips. Unfortunately, like Ana, I couldn’t quite buy into the motivations of either character, their insta-romance, or their cringeworthy, often nonsensical exchanges. First, motivations – Phillips learns that people have seemingly vanished into thin air at Roanoke, so he comes home. As soon as he lands though, his first action is…to steal his mother’s car from the airport parking lot (leaving his mother to wait at the gate for him for hours), and drive to Miranda’s house. A girl that he has not seen or spoken to in four years. He goes there…well, it’s never really explained (trust me, I reread the section a few times to make sure I wasn’t being obtuse). Basically, the reason for Phillips ditching his mother at the airport – during a time of crisis with people disappearing, mind you! – is that he saw a clip of Miranda on the news, and knew he had to see her. This was a portent ode for the rest of my experience with Blackwood.

I also, unfortunately, must agree with Ana regarding the forced nature of Miranda being a Girl Geek – the repeated, blatant attention drawn to her love of Battlestar Galactica and The Vampire Diaries came off as annoying rather than endearing. But beyond these more minute issues, the larger issue of character reaction and motivation comes into play, especially with Miranda learns that her father has been murdered…and a few pages later is hanging out with Phillips and his family, crushing on the hot bad boy back in town, with nary a thought for her father. Just…no.

There’s also a HUGE plausibility gap problem with Blackwood, which spans the majority of the book. There’s a completely ludicrous FBI investigation of Phillips and Miranda as cohorts in planning her father’s murder/implicated in the disappearance of the colonists (these are the worst FBI agents in the history of the bureau). There’s the ridiculous backstory of the Reason for the Missing Colonists – which involves Miranda, an ancient immortality-unlocking gun, and a spurned lover/Evil Mastermind that can distill the secrets of life and death. These elements were all underdeveloped, or hokey in the extreme, and I simply could not suspend my disbelief. It also doesn’t help that from a writing perspective, inconsistencies kept jarring my reading experience – for example, when Phillips takes Miranda to meet Dr. Roswell (who has conducted painstaking research about the missing colonists), someone that Phillips has not seen or communicated with in four years, welcomes the teens into his lab as though they see each other every day, without a word about Phillips’ returning. There’s a high degree of repetition, from BSG’s “frak” (which does feel very dated now, I’m sad to say), to (bizarrely) CNN.

It pains me to say it because I was so excited for this book, from its gorgeous cover to its promising blurb, but say it I must: Blackwood was not the book for me.

Notable Quotes/ Parts: You can read an excerpt online HERE

Ana: 4 – Bad, but not without some merit

Thea: 4 – Bad, but not without some merit

Reading Next: The Cavendish Home For Boys and Girls by Claire Legrand