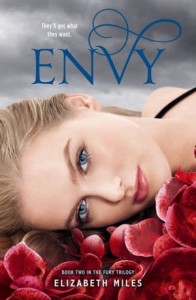 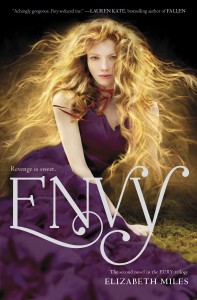 The Furies are back in the second book of a chilling paranormal trilogy where revenge rules the day—and “sorry” isn’t going to cut it.

Spring is coming, and the ice is slowly melting in Ascension…revealing the secrets buried beneath.

Emily Winters knows the Furies have roots in Ascension, Maine—but she’s about to discover that they’re deeper than she ever imagined. With the help of her new friend Drea, she vows to dig them out. But it’s hard to focus when she’s desperate to make up with JD, and to figure out why Crow, a mysterious Ascension High dropout, seems to be shadowing her.

Meanwhile, new girl Skylar McVoy is determined to leave her own dark past behind. So she’s thrilled when popular Gabby takes her under her wing, and the stunning and sophisticated Meg offers to give her a major makeover. But everyone knows what happens to the vainest girl of all…

It’s tempting to be naughty. But beware: the Furies are always watching, and their power grows stronger by the day.

Stand alone or series: Book 2 in the Furies Trilogy

How did I get this book: Review Copy from the Publisher & Paper Lantern Lit

Why did I read this book: Both Ana and I LOVED Fury, the first book in this planned trilogy. Naturally, we were on tenterhooks waiting for this second installment.

**WARNING: This review contains inevitable spoilers for Fury. If you have not read the first book and do not want to be spoiled, LOOK AWAY! You have been warned.**

Holy vengeful furies, Batman! When I started Fury last year, it was with apprehension and fear – fear that the book would be some ridiculously contrived “retelling” that might involve a so-called “fury” falling in love with a hot teenage dude and thus being redeemed (gag). I was thrilled upon reading that first novel to discover that Elizabeth Miles’ furies were true to their mythological roots – these are horrific characters bent on revenge at any cost, and TRUST ME when I say they exact their toll on the characters in Fury. When I started Envy, once again I was nervous – was Fury a fluke? Would there be backtracking/contrivance in Envy? These were the troublesome questions that I had floating around in my silly little head – thank goodness, my paranoia was very much unfounded, because Envy is every bit as darkly wonderful as Fury (with only a few reservations). I can safely say that this as become one of my favorite current paranormal/horror YA series’ – Envy is compulsively readable and delightfully creepy.

But I’m getting ahead of myself. First, the story:

Envy begins shortly after the events of Fury, which culminated in the death of football star Chase, and Emily’s bargain with the Furies to save her best friend (and unrequited love interest) JD. As her friendship with JD crumbles, Em tries to salvage her remaining relationships, though patching up the hurt and distrust between herself and bff Gabby is hard when she’s devoting so much time to figure out how she can stop the furies before they strike again. With the help of her new friend Drea, Em delves deeper into the mystery of the three vengeful Erinyes, their presence in Ascension, and why they are so fixated on Emily.

Meanwhile, it is still winter in Ascension, Maine, when new girl Skylar moves to town to live with her Aunt Nora. Skylar takes the move as an opportunity to reinvent herself – new town, new slimmed-down physique, new Skylar. Free from the cruelty of her now-imprisoned alcoholic mother, and finally out from beneath the shadow of her beautiful, popular older sister Lucy, Skylar seizes the move as her opportunity to leave the awful memories of home behind and start anew. She couldn’t be more thrilled when her plan starts to work, and she’s taken in by the charming Gabby who loops Skylar into the social scene at Ascension High. Soon, Skylar is caught up in planning the Spring dance, getting invited to parties, and has her sights set on a guy named Pierce.

Little does Skylar know that her past is about to catch up with her in a brutal, horrific way. Befriended by three impossibly beautiful cousins who take an unnatural interest in Skylar, she trusts and begins to follow their advice: to take what she wants, from popularity to the boy she likes, by any means necessary. Even if that means she has to get someone like the perfectly sweet Gabby out of the way.

As Em frantically searches for answers in the past, Skylar’s future is marked by the Furies, and so many innocent lives hang in the balance.

From a pure reading enjoyment perspective, Envy is bonafide book-crack. I zipped through this novel in a few hours – not because the subject matter is light or lacking sufficient heft, but because Elizabeth Miles’ writing style is addictive, compulsive, and effortlessly engaging. It’s testament to the strength of her writing, in fact, that I didn’t stop to question anything until I finished the novel. Only upon further reflection (and in my getting ready to write this review) did I start to question some key aspects of the story.

The most glaring and immediate aspect to discuss is, clearly, Envy is a middle novel in a trilogy. Very little actually happens in this novel – the climactic reveal on the novel’s last page is hardly a surprise (as Ana and I were discussing, both of us kind of guessed this big “twist” from the end of the first book), and little groundwork is actually laid to show the origin of these Furies, or what they ultimately want in Ascension.

That’s not to say that the book isn’t effective, compelling or entertaining! Nor is it to say that Envy is without tension or shocking developments – as with Fury some really horrible, devastating things happen in this book. People die.[1. I won’t spoil it but I cannot believe one character has died! I refuse to believe it!] People make some seriously shitty decisions. When the Furies finally make their true colors shown to Skylar, the disturbing, pulse-pounding, horror factor is way, way up there.

On the negative side, there are certain contrivances. One character, Crow, is introduced in this book and feels entirely out of place with the story – his sole role is to create tension between JD and Emily in a dreaded, completely unnecessary love triangle. In fact, his character is SO abrupt and unnecessary, that it feels as though someone told the author that she needed to include a love triangle to complete the proper YA paranormal formulae. I do not like it. Not at all.

While the writing is utterly competent and engaging, the actual plotting wasn’t quite as strong in Envy. Thankfully, any lost ground in the plot department is made up in spades with the characterizations – this is where I feel that the Furies trilogy excels. In this second installment, we reconnect with the familiar figures of Emily, Drea, and Gabby, and are also introduced to the new character of Skylar. Em, the dubious and conflicted heroine of the series, struggles in this book to reconcile her secret knowledge and new life with her old friends and the girl she used to be. While her arc isn’t the most interesting one, I do like how earnest Em’s character is, and how she does screw up and has a hard time balancing her time and her responsibilities.

The far more interesting characters, to me, were Gabby and Skylar. I love that Gabby is a huge, central figure in this book – how easy would it have been for Ms. Miles to write Gabby out of the series, as Em’s former best friend (who gives up on Em for stealing her boyfriend) and bitchy high school queen bee? Instead, Gabby is given depth and heart in Envy, as an awesome friend and the object of Skylar’s obsession. The other standout is Skylar herself, who is a deeply, deeply flawed and hurt young woman that has a traumatic past and an even more horrific future. My heart bled for Skylar in Envy, as she is twisted and consumed by the Furies’ machinations.[2. On that note, perhaps those who had a hard time reconciling the actions of Em and Chase in Fury will find a more sympathetic character in Envy‘s Skylar.]

Most of all, you know what I love about the characters in this series? These are girls that LIKE to get dressed up, that like shopping, that like drinking and partying and talking about guys. And you know what? These girls aren’t shamed, and no Big Moral Lessons are imparted. I love that Elizabeth Miles writes female characters that actually resonate as real teens (and aren’t subjects of narrative punishment or judgment).

The male characters are, unfortunately, far less detailed – JD barely has a role in this book, Pierce is likeable but forgettable, and Crow…well, we’ve gone over this before. Crow isn’t so much a character as he is a plot device. This is a bit of a disappointment, given how strong Chase and JD were in Fury – but there’s still one book to go, so hopefully we’ll see some stronger representation in book 3.

All criticisms said, while it may not have been quite as good as Fury, Envy is a powerful, excellent book. Quite simply: I loved Envy, and I cannot wait for Eternity, the third and final book in this thrilling, unsettling trilogy.

Reading next: The Stepsister Scheme by Jim C. Hines

We have ONE signed copy of Envy up for grabs, courtesy of Paper Lantern Lit! The contest is open to ALL and will run until Wednesday August 15 at 12:01pm (EST). In order to enter, use the widget below. Good luck!