Title: A Brief History of Montmaray 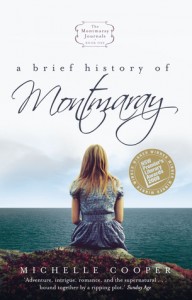 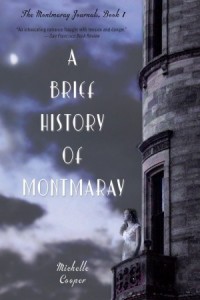 “There’s a fine line between gossip and history, when one is talking about kings.”

Sophie Fitzosborne lives in a crumbling castle in the tiny island kingdom of Montmaray with her eccentric and impoverished royal family. When she receives a journal for her sixteenth birthday, Sophie decides to chronicle day-to-day life on the island. But this is 1936, and the news that trickles in from the mainland reveals a world on the brink of war. The politics of Europe seem far away from their remote island—until two German officers land a boat on Montmaray. And then suddenly politics become very personal indeed.

A Brief History of Montmaray is a heart-stopping tale of loyalty, love, and loss, and of fighting to hold on to home when the world is exploding all around you.

Stand alone or series: Book one of the Montmaray Journals

Why did I read this book: I’m actually cheating a bit – I’ve read and reviewed this novel before, back in 2009, when it first came out in the US. That said, I felt like I didn’t have enough room to truly give the novel its due credit (250 words is NOT ENOUGH!), and with the release of the third book in the series out soon, I decided to revisit Montmaray here with a formal re-read and review.[1. To be completely honest, too, it has been 3 years since I read book 1 and needed a re-read before delving into the next books in the series.]

October, 1936 – the sovereign island nation of Montmaray seems an idyllic, impossible place. Sitting a scant few hundred miles off the coasts of England and France, Montmaray and her inhabitants are a strange, quirky bunch. With as many FitzOsborne royal highnesses (4 on the island, with one prince heir studying at Eton) as there are inhabitants, the handful of countrymen and women hardly stand on ceremony – especially considering how threadbare and impoverished the royal family actually is. Living in a decrepit, crumbling stone castle on an island surrounded on all sides by a cold and unforgiving sea, the FitzOsbornes are hardly your typical aristocratic royals. Princess Sophia is not the eldest or most charming (that would be her older brother Prince Toby), not the prettiest or smartest (that would be her cousin Princess Veronica), neither the bravest nor the most brash (younger sister Princess Harry), nor the maddest (the reigning King of Montmaray, Uncle John). But Princess Sophia is the storyteller of the FitzOsborne clan, and in A Brief History of Montmaray, through her journal she tells the story of the late months of 1936, as tensions simmer in a Europe on the brink of war.

As the months pass, Sophia provides insight to the lives of her family in Montmaray, their struggles and their daily routines – and then the danger that strikes when a pair of men in a ship flying a swastika flag lands on their sovereign island.

Well folks, the fact that I’m writing this review a second time, three years later should say something. A Brief History of Montmaray has everything one could want in a novel – compelling narrative voice, convincing and plausible in epistolary style through the eyes of our heroine Sophia, quirks, comedy, and just enough dramatic heft to keep you engaged throughout the book. Easily, the most winsome thing Montmaray has going for it is the voice and character of narrator Sophia. Now, this may come as a shock, but I am NOT a huge fan of the epistolary novel – this is because the style often feels forced or fake, and even some of the best stories that use the technique require severe suspension of disbelief. [2. See Elizabeth Wein’s masterful Code Name Verity (Ana’s review, my review), which pushes the envelope of disbelief, but is so damn good you’re easily able to forgive any of the minor narrative hurdles.] But when an epistolary novel is done well, it is…well, magical.[3. One of my favorite novels of all time is Susan Beth Pfeffer’s Life as We Knew It, which is a beautifully executed novel of this type.] And, in my own humble opinion, A Brief History of Montmaray delivers this same hugely successful, awesome calibre epistolary style. I *love* Sophia’s voice, which breathes life into a surprisingly quiet story. Hers is a story filled with the mundane – discussions of leaky ceilings, cleaning dishes, dusty mattresses – but with a believable, playful edge. Sohpia’s fears, her own self-conscious comparisons to her beautiful and capable cousin Veronica, her ridiculous (by her own admission!) obsession with a boy she cannot be with, all of these elements contribute to the quirky, effortless style that is Sophia’s narration. Oh, and she’s seamlessly funny, too, weaving stories through her own diary effortlessly. For example:

When I asked her what she’d thought of Pride and Prejudice, she only wondered aloud how anyone could have written a novel set in the first part of the nineteenth century without once mentioning Napoleon.

For all of her disparaging, self-deprecating remarks about how she isn’t as clever as Veronica, Sophia has a way with words. On the character front, the other FitzOsbornes and supporting cast are similarly well done – Veronica with her insufferable logic is a wonderful counterpart to Sophia’s more emotional and less-self-assured perspective; Toby’s effervescence, even told secondhand through letters, is contagious; Harry’s tomboyish prickliness is endearing.

The other huge standout feature of A Brief History of Montmaray is the setting itself. Compared to I Capture the Castle, Montmaray is a similar story of an impoverished, eccentric family living in a crumbling castle (and I think consciously pays homage to Dodie Smith’s beloved book). But then, of course, there’s the other aspect of the novel that separates the FitzOsbornes from the Mortmains – and that would be the historical context, what with Nazis and a quest to find a particular ancient artifact, and what not. While these elements are not the best-executed in current YA fiction (once again, I have to draw attention to Elizabeth Wein’s wonderful Code Name Verity), the tension is high and I like the possibilities for direction in future stories the particular Nazi involvement in A Brief History of Montmaray affords. Yes, there’s a strong dose of melodrama by novel’s end, but the strange mix of a dash of superstition/supernatural involvement, a smidge of romance (not in the way you are thinking, though), combined with the compelling characters and stellar narration, make the novel thoroughly enjoyable and work.

And ultimately, that’s what it comes down to, right? I loved this book. I hope others read it, and I am thrilled to finally get back on the FitzOsborne train and finish The FitzOsbornes in Exile and The FitzOsbornes at War very, very soon.

Usually Henry would be down at the village too, but I think she went back to bed after breakfast (she did go out fishing last night, the horrible child). Henry is meant to do three hours of lessons every morning now that Toby is back at school, but she’s managed to avoid them so far. Not that Veronica or I have pushed too hard for lessons to resume, because we’re the ones who are supposed to teach her. When we were her age, we had a governess and tutors, but there was more money then and besides, there was Toby to consider (it would have been quite embarrassing if he’d turned up at Eton unable to read). After Toby went away to school, Veronica and I mostly taught ourselves out of the library. Veronica, of course, proved to be much better at improving her mind than I was. (One could argue that this was because she had a better mind to begin with. However, one could also point out that I’ve squandered countless hours reading romantic novels, planning my future trousseau and daydreaming about Simon, hours that could have been far better employed learning French grammar or reading Plato.)

Reading Next: The Stepsister Scheme by Jim C. Hines