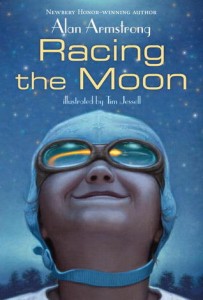 In the spring of 1947, outer space was an unexplored realm. But eleven year-old Alexis (Alex) Heart and her impulsive brother, Chuck, believe that the stars are within reach. In the midst of building their own rocket, Alex befriends Captain Ebbs, and an army scientist who is working to create food for future space travelers, and who is also a descendent of Captain John Smith. Alex soon introduces Chuck to her new friend, and the trio’s shared interest in space travel sets off a series of adventures that the three will never forget. From meeting pioneering German rocket scientist Dr. Wenher von Braun, and a thrilling sailing trip down the Potomac to an island on the Chesapeake where a top secret rocket launch is about to take place, Alex and Chuck are about to have their lives forever changed.

How did I get this book: Review copy via NetGalleyy

Why did I read this book: I was browsing NetGalley and came across this title. I am really into not only Historical fiction but also MG novels so it sounds just like the thing. Plus, I tend to pay attention when a book is written by a Newbery Honor-Winning author.

It’s 1947, the War is over and exploration of outer space is starting to look like it could become a reality. 11-year-old Alex Hart and her older brother Chuck have been working on a Moon Station in their backyard and plan on building their own rocket, whatever it takes (and sometimes this “whatever” means outsourcing materials illegally). Although her parents and even her brother sometimes look down on Alex’s “unfeminine” behaviour, Alex finds an ally and supporter on their new neighbour, Captain Ebbs, a respected army scientist. Ebbs works to create food for astronauts and recognises on Alex and Chuck fellow explorers – and takes a keen interest in their lives. The trio adventure together down the Potomac to a top secret island where a rocket launch is scheduled to take place. On their journey they become acquainted with famous scientist Wernher von Braun and learn about the history of their region via the historical diaries of Captain John Smith.

I am rather conflicted about Racing the Moon. On the one hand, the book has considerable flaws in terms of storytelling. On the other hand, I didn’t expect Racing the Moon to be so thought-provoking. It’s been several days since I finished it and I am still considering what I read.

The story is all over the place – this is a really short book and there are many different threads that work individually but don’t form, I felt, a coherent whole. Everything is very episodic.

Alex is the narrator and at first it seems she would be the main character. And as a female character, she is totally awesome. She is daring, smart, optimistic and ambitious. She admires the aviation pioneer Amelia Earhart and would love to follow on her footsteps. It is heartbreaking to hear her mother trying to subdue those very qualities, determined to make Alex see that she has no business stepping into what she perceives as male domain. It is great then that Alex befriends Captain Ebbs and has that example of a woman who has succeeded in that very domain. You then have the additional threads of the friendship between Ebbs, Alex and Chuck and their trip; Chuck’s adventures on his own; Wernher von Braun’s life; not to mention the addition of excerpts from the explorer John Smiths’s diaries depicting his life and adventures. This addition proved to be boring, dry, taking the narrative into info dumping department.

Those storylines often becomes background noise in relation to Chuck’s though, the real protagonist of this story. In all fairness, the relationship between Alex and Chuck is expertly written, and I loved to see Alex’s admiration for her brother, despite his obvious problematic behaviour. But this is an admiration that is not returned, in spite of the fact that Chuck so very often relied on Alex’s help. Chuck’s arc is one that is very, very familiar: that of an extremely problematic boy. His life has been shaped by the learning disability that has been a stumbling block for his ambitions. He shares many of Alex’s qualities and is supposedly a very smart kid who could have an awesome future if only someone took an interest. It is never clear why exactly his loving parents were not the ones to help him. The fact is: Chuck behaves extremely badly. He steals, he lies, and he concocts dangerous plans that selfishly put Alex’s life in danger – over and over again.

And the story and its characters downright excuse him on the grounds of his potential. And this is where the book becomes so thought-provoking – and problematic.

Racing the Moon provides a dual thematic core of the importance of explorers and pioneers and of second chances. The former is really exemplified in the way that explorer John Smith’s narrative is added to the story although the attempt to form a parallel between him and Chuck which unfortunately felt extremely forced and contrived.

Which brings me to the theme of “second chances”.

The problem is how the text kept insisting that Chuck was a genius and because of that, his behaviour was excused over and over again. Although some of it was indeed questioned by characters and he did get caught eventually, the narrative and the characters were ready to forgive and forget on the grounds that he had such a brilliant future. A lot of his reckless behaviour was literally CRIMINAL AND DANGEROUS, and yet he gets away with everything with nary but a pat on his back and is in the end REWARDED with the chance of a bright future at NASA. Am I saying he did not deserve a second chance and a future? Of course not. I love second chances. I believe in second chances. I especially believe in second chances for kids. But I feel wary of the way that Chuck kept getting away with the REALLY problematic stuff he did: from stealing an airplane to breaking and entering into a top secret Army facility and putting Alex’s (and his) life in danger.

His was not the only problematic behaviour that I felt was excused by the narrative on the grounds that “genius should be rewarded no matter what”. Because you also have the example of Wernher Von Braun, a real life genius who defected from Nazi Germany to the US. It is said that without Von Braun, we would not have landed on the Moon. It is also a fact that he was a member of the Nazi party, one who had exploited SLAVE LABOUR whilst building rockets in Germany during the War. When he was brought to the US, his past was deleted from records and he started anew as a prestigious scientist. Although one of the characters – Alex’s 15 year old brother – voices contempt for Von Braun’s activities during the war, I felt this was brushed off as a childish outburst. In fact, Ebbs defends Von Braun in the same way that Chuck is defended, as a “maker”:

our survival depends on our making our way into space, Alex – to new worlds, to making new worlds. VB’s hands and mind are crucial for that. I see him doing good to make up for the bad he did.

The problem for me is how this assumption is never really questioned and is taken at face value by the text. I wish there was more discussion about Von Braun, for example. Because this book was written NOW, after we know his contribution to Space Exploration and hindsight is always 20-20. But there is a clear ethical and moral question about WHO back then got to decide that Von Braun’s life was worth more than the lives of those whose work he helped exploiting in Germany. This really troubles me – I see his contribution, I believe in second chances but I wish there had been a better, more in depth exploration of these issues – and above all, of personal responsibility – in this book. Especially considering it is a book for children.

I don’t think the fact Racing the Moon is a book with a cool female character and grand magical adventures excuses all the problems I had with it.

Early Sunday morning, Alex headed up the hill. The weight she was carrying was heavy on her shoulder, but she was unaware of it. “Hi, Amelia,” she called to a blue dragonfly darting by. There were grass flowers in the warm breeze, a sweet scent that was almost dizzying. Then the sharp smell of fresh asphalt from the new road hit her with the thrill of a slap.

She stopped in front of one of the new houses. The ground around it was raw red clay. A large woman was on her knees, planting a bush. Her back was to the road.

“Hi!” the girl called as her dog’s tail began waving in expectation.

She cleared her throat to get the woman’s attention.

Finally Alex hollered, “Lady! Would you like to buy some plants?”

The dog barked, thinking it was some sort of game.

“Huh? What?” the woman called out, almost falling over as she jerked around, her trowel flying.

“Oh!” the woman exclaimed, her face clearing a little. “Well, hold on,” she called in a friendlier voice as she stood up slowly like you’d fold out a pocketknife.

The woman was tall and square-­shouldered, in jeans and a dark red shirt. She had dark curly hair and strong-­looking hands. Her face was long. She looked like she’d been out in the sun a lot.

Alex was an eleven-­year-­old in a not-­too-­clean T-­shirt and dirt-­stained jeans. She’d just cut her hair herself for summer. The plants she was selling were in two baskets hung on the notched broomstick she carried across a shoulder like a coolie. The large brown dog wagged happily beside her.

Rating: 4- Bad but not without some merit.