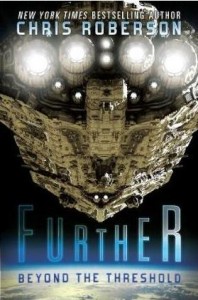 Title: Further: Beyond the Threshold

The thirty-fourth century. Humankind is spread across three thousand light years in a myriad of worlds and habitats known as the Human Entelechy. Linked by a network of wormholes with Earth at its center, it is the world Captain RJ Stone awakens to after a twelve-thousand-year cryogenic suspension.

Stone soon finds himself commanding the maiden voyage of the first spacecraft to break the light speed barrier: the FTL Further. In search of extraterrestrial intelligence, the landing party explores a distant pulsar only to be taken prisoner by the bloodthirsty Iron Mass, a religious sect exiled from the Entelechy millennia before. Now Stone and his crew must escape while they try to solve the riddle of the planet’s network of stone towers that may be proof of the intelligence they’ve come to find.

The first in critically acclaimed author Chris Roberson’s scintillating new series, Further: Beyond the Threshold is a fascinating ride to the farthest reaches of the imagination.

Stand alone or series: Book 1 in the Further series

Why did I read this book: I have to admit that I was extremely skeptical when I learned of Amazon’s verticalization and expansion into the publishing space, especially for the speculative fiction genre. (To be fair, and in the spirit of full disclosure, I do work in the publishing industry, so Amazon is a sensitive subject, to say the least!) While I do have my skeptical moments, I also have my optimism – Zetta Elliott is an author that I’ve read and loved, and both of her books were published through Amazon’s Encore program. Plus, Chris Roberson is an author whose work I’ve loved in comic book form (especially for his work on the Cinderalla spinoffs for Fables) – naturally, I was very curious about his science fiction prose-form work. Plus…the synopsis sounds great and I like the almost Star Wars Imperial Destroyer-ish feel to the cover. I’m easy and superficial like that.

In the 22nd century, Captain Ramachandra Jason (“RJ”) Stone and a small crew of five others embarked on a perilous but hopeful journey to the stars – spending the 10 light-year journey in cryogenic sleep en route to Alpha Centauri B. When RJ awakens, however, he is not surrounded by his fellow travelers on the surface of a new Earth-like planet four decades later, as planned. Instead, the Captain finds himself the sole survivor of Wayfarer One‘s unlucky fate, but approximately 12,000 years later. Early in its mission, the Wayfarer was hit by a micrometeoroid, which damaged the primitive ship’s internal logic and neglected to wake up its crewmembers. Now, twelve millennia later, RJ Stone is a man out of time and thrust into a world that is nothing like the one he left behind.

In his long, long sleep, humanity has changed drastically. Earth – ravaged by environmental change, overcrowding, and still suffering from the aftershocks of a devastating asteroid impact – has changed in composition and size. The very definition of humanity has changed, to include all sentient creatures of Earth-life origin – no longer limited to biological homo sapiens bipeds. With advanced technology and the creation of a threshold connecting star systems formerly tens and hundreds of light years away by a network of portals (wormholes), humanity has grown peaceful, but somewhat complacent. RJ Stone’s arrival changes all that – and a daring project to reach across the galaxy and find non-Earth origin sentience on the first-ever FTL starship, the Further, will finally be undertaken, with Stone at the helm.

I haven’t had the pleasure of reading any of Chris Roberson’s prose work prior to Further (though I have thoroughly enjoyed iZombie and Cinderella: From Fabletown with Love), but I now see that there is a deficiency in my speculative fiction diet – because this first novel in a new SF series? Yeah – it’s pretty awesome.

Further begins with a very familiar staple in the SF canon – the good ol’ Rip Van Winkle caper, with a hero that has Slept!Too!Long! only to awaken to a world that has drastically changed. It is the manner of the changed world, the definition and evolution of humanity, and the fun ease with which Roberson writes, however, that makes Further such a compelling read. Introducing readers to a far-future iteration of humanity, where definitions have shifted to include any form of sentience – animal-based, mechanical, or otherwise – I found myself instantly captivated by this vision of future civilization. Through the lens of a somewhat relatable contemporary character (for, though Ramachandra Stone is from the twenty-second century, post-devestating asteroid impact, his views and interpretations are close enough to our own contemporary world), we witness how these perceptions of what defines intelligent life change over the millennia. And there’s something very natural and acceptable about this evolved perspective of sentient life. Ramachandra’s own views, his quickness to label fellow sentients as robots, chimps, or birds instead of human is offensive to all those in this distant future but perhaps more in-tune with our own current perceptions and prejudices. (I also appreciated the juxtaposition of Ramachandra’s own Indian and American background leveraged against this future vision of discrimination.)

From a writing and science perspective, Further also does a solid job. While the story’s pacing is a tad uneven and tends towards heavy exposition, especially in the early chapters,I do appreciate Roberson’s attempt to integrate some scientific explanation for his future world – in which humans have taken to adopting animal features and robot, bird-watching space probes are considered human. And while some of the harder science elements are there (the use of the ship Further‘s working Alcubierre Bubble/Drive, for example), Roberson isn’t as detailed as a Larry Niven or Stephen Baxter. Rather, Further focuses more on character and the personal journey of Ramachandra as he tries to adjust to his new time and role in the Human Entelechy. The novel’s main conflict is perhaps a bit muddy and comes late in the book – featuring a few one-note villains – but I don’t hold that against the novel. The exposition and world, the character of Ramachandra, and the introduction to this very strange future is the meat of the story, and I truly enjoyed it all.

In the vein of Roddenberry’s classic USS Enterprise, the Further and her intrepid crew have many, many adventures ahead of them on their ongoing mission to explore strange new worlds and boldly go where no member of the Human Entelechy has gone before.

And I, for one, am very excited to continue to ride.

There’d been mass restrictions on what we could bring on board Wayfarer One, of course, but nothing like those I’d known from my days in the Orbital Patrol. But that’s only to be expected. After all, a buoy tender on a six-month tour has considerably less in the way of amenities than an interstellar vessel intended for a century-long voyage. So where I was lucky to squeeze forty kilograms of personal items when I served on baord Cutter 972, on Wayfarer One I’d been able to bring along close to two hundred kilos.

All that was left of that allowance were the three items on the bed.

In the millennia I slumbered, anything metal, ceramic, and plastic had fared much better than those items that included organic elements, all of which had long since disintegrated, but even the strictly nonorganic had become badly pitted and decayed with age. Only these three objects had been sufficiently intact that they could be restored to pristine condition by nanoscopic repair robots.

A lifetime of memories and all that remained were three items – an action figure, a cap gun, and a handheld.