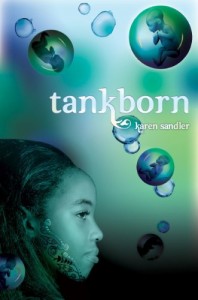 Best friends Kayla and Mishalla know they will be separated for their Assignments. They are GENs, Genetically Engineered Non-humans, and in their strict caste system, GENs are at the bottom rung of society. GENs are gestated in a tank and sent to work as slaves as soon as they reach age fifteen.

After weeks of toiling in their Assignments, mystifying circumstances enable Kayla and Mishalla to reunite. Together they hatch a plan to save the disappearing children. Yet can GENs really trust humans? Both girls must put their lives and hearts at risk to crack open a sinister conspiracy, revealing secrets no one is ready to face.

Stand alone or series: Stand alone novel (but maybe there’s more in the future set in this world?)

Why did I read this book: To be honest, I was turned off by the kitschy cover (what is with all the bubbles?! They are all over the text of the book too, which is bizarre). BUT, when I started to read reviews praising the science fiction, the writing, and, most importantly, the awesomely diverse-minded worldbuilding, I was so very in.

On the distant world of Loka, lightyears away from Earth, humanity has changed. Separated into distinct, non-transmutable castes, Lokans run the spectrum from trueborn humans of untainted DNA and significant wealth to lowborn humans living in shanties and working menial jobs. At the very bottom of the hierarchy of power are the GENs – tankborns with human and animal DNA, as well as some machine integration, noted by a telltale tattoo on their right cheek. Every GEN is also enhanced with a special skill set (a “sket”), that will determine where they will work once they come of assignment age.

Kayla and her best friend Mishalla are both GENs from the same lowlying sector, Chadi. The slightly elder Mishalla is assigned to be a nurturer in a district thousands of kilometers away, and shortly after Kayla is assigned to be a private elderly caretaker for a wealthy trueborn family – and though the girls believe that they might never see each other again, their destinies are inextricably linked. While Mishalla is heartbroken as night after night her charges are taken away by lowborn nurturers, Kayla learns that her own charge, Zul Manel, has secrets from his past and plans for the future that will rock the very foundations of society. With the unexpected help of a trueborn human, Zul’s grandson Devak, and a lowborn human named Eoghan, Kayla and Mishalla will change everything.

I’m of two minds when it comes to Tankborn. The most important thing to say is: I absolutely head-over-heels LOVE the world that Ms. Sandler has created. Lee and Low books is a publisher dedicated to diversity and publishing books that feature or are by people of color, and Tankborn lives up to that mission with its fascinating, imaginative, and wonderfully diverse world. The society on Loka is stratified into different castes, with trueborns ranked high with their dark skin and diamond bali earrings, and lowborns with their paler skin and lower grade balis denoting status. GENs, not even considered human, are naught more than slaves, utterly deprived of basic rights and freedoms. Even more, the GEN belief system is a religion that glorifies in an ultimate, infinite being that has created trueborns and lowborns, and the GENs to serve them. And the coolest thing about this rigid social strata? None of it feels forced or overt – there is subtlety in Ms. Sandler’s writing, which is incredibly refreshing and appreciated, especially in a subgenre (YA SciFi Dystopia) that is chock-full of sledgehammer-technique message-making. There is an utter convincingness to this world order and cultural system that is both familiar, in those glimpses taken from aspects of human history, and alien.

In the same vein, the technological aspects of the world are believable (within the realm of science fiction, of course) with limitations, explanations, and technology that makes sense. The concept of GENs with their “annexed” and “bare” brains – where their machine integration allows the annexed portions to be programmed, and their biological portions to behave as a regular human brain would – is fascinating. The GEN tattoos that allow for the interfacing of technology to biology is an interesting conceit, and though the human-machine is a science fiction standby, Tankborn does so much to distinguish itself from the tired Cyborg routine by virtue of its complex social world.

I did mention that I am of two minds when it comes to Tanborn, though, all praises said. While I was completely won over by the intricate details and flawless worldbuilding, I felt underwhelmed by the actual plot and characters. The overarching story is meant to follow dual protagonists Kayla and Mishalla, but in practice the story is far more lopsided, as Kayla is undoubtedly our primary protagonist, with Mishalla’s story is interspliced every four or five chapters. As characters, Kayla is our clumsy heroine with physical strength as her sket and some emotional strength to match. Mishalla is similarly good-hearted and generally amiable. The thing is though, both characters lack bite. They are empathetic and we can feel for them as they struggle against a world in which they are controlled and mistreated, but there’s nothing particularly interesting or distinctive about either character. The story, too, is muted and lethargic, with the main conflict focused on the mysterious disappearing children, and a group of people that have approached Kayla and Mishalla (as well as other GENs) and have appropriated some of their programming and given them tech to hide and to pass on. Much of the novel is actually focused on Kayla as she struggles in her new role as Zul’s caregiver, and her burgeoning relationship with Devak, both of whom figure into the much larger plot. There are some revelations that happen in the last act of the novel, lackluster and somewhat trite.

Overall, Tankborn has a lot going for it – a beautifully developed world, a society that is culturally detailed, and a scifi background that abides by set rules. On the other hand, the characters are a little underdeveloped, the story lacking direction and ultimately coming to a slightly disappointing conclusion. Ultimately, though, Tankborn‘s strengths outweigh its shortcomings, and I know that I’ll be on the lookout for more books by Karen Sandler in the future.

Notable Quotes/Parts: You can read the first four chapters of Tankborn online HERE.

Rating: 7 – Very Good, but only really because of the stellar worldbuilding