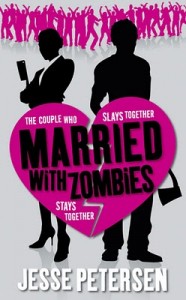 A heartwarming tale of terror in the middle of the zombie apocalypse.

Once upon a time they met and fell in love. But now they’re on the verge of divorce and going to couples’ counseling. On a routine trip to their counselor, they notice a few odd things – the lack of cars on the highway, the missing security guard, and the fact that their counselor, Dr. Kelly, is ripping out her previous client’s throat.

Now, Sarah and David are fighting for survival in the middle of the zombie apocalypse. But, just because there are zombies, doesn’t mean your other problems go away. If the zombies don’t eat their brains, they might just kill each other.

Stand alone or series: Book one in the Living with the Dead series

How did I get this book: ARC from the publisher…from BEA 2010

Why did I read this book: I have had this book on my TBR for over a whole freaking year, sitting quietly on my TBR and collecting dust. I was so excited to get a copy at last year’s BEA, but in the myriad books I hauled home with me, somehow it got lost in the shuffle. That is, until recently, when I was perusing the always wonderful Orbit blog and saw that book three in the series was coming out. As I’ve been in a zombie kind of mood (you’ll see, many of my upcoming reviews are undead-centric), I vowed to atone for my forgetfulness and finally read Married with Zombies (and then, provided I liked the taste of Ms. Petersen’s undead, the rest of the series).

Married life for Sarah and David is anything but a picturesque, ideal union. After eight years of not-so-happily wedded bliss, their relationship is on the ropes, waiting for the knockout punch that culminates in divorce. Though the young couple has been attempting to work through their issues with marriage counseling, Sarah knows it’s just about time to throw in the towel (put it this way: when you start to google “divorce lawyers” on the shared home computer and notice that you don’t even have to type the whole phrase for it to pop up in your browser history, it’s not a good sign). On what turns out to be their last trip to their therapist’s office, the couple is too busy playing relationship stratego to notice the disaster of apocalyptic proportions happening around them. Only when they see their usually impeccable therapist, Dr. Kelly, covered in viscera whilst ravenously devouring the still-warm corpses of the Wilson couple do Sarah and David begin to suspect that the proverbial shit has hit the fan. But all is not lost! For even as civilization crumbles around the troubled couple, even as they find themselves fighting for survival against the undead horde, even as they stave off fellow survivors (including insane cultists and an adorably clueless former-cheerleader), Sarah and David inexplicably find that a zombie apocalypse is just what they needed to finally get those pesky marriage therapy techniques to work. Together, the couple discovers the key to rekindling their mutual affection: a few good melee weapons, some firearms, and the end of the world.

A ZomRomCom in the manner of Shaun of the Dead, Married with Zombies is a compulsively readable, ridiculously fun novel. Narrated entirely from Sarah’s (hilarious) first-person perspective, this first novel in a planned zombie series might not have anything original to bring to the zombie dinner table – but it manages to sneak up on you and take you by surprise with its wry, potty-mouthed, absurdist sense of humor. I say take you by surprise, because from a pure plotting and worldbuilding perspective, Married with Zombies is pretty middle of the road zombie fare. Tropes abound (e.g. religious fanatics always rear their loony heads in apocalypses, and this novel is no exception), zombies are of the slow-moving, virus-escaped-from-a-laboratory variety, transmitted through biting/scratching, etc. And yet…there’s something irresistible about Married with Zombies. And that, my friends, lies with its characters and narrative voice.

As anyone that has ever been in a long term relationship can attest to, things aren’t always ponies and rainbows when it comes to a significant other, and part of the magic of Married with Zombies is this wonderful mix of the relatable frustrations of coupledom blended with the disastrous outbreak of the zombie apocalypse. It’s the characters, Sarah and David in particular – and not so much the zombies – that make this novel work. I freaking love Sarah and her narration as from page one she’s not afraid to swear like a sailor or get her hands dirty (literally). Sarah (somewhat understandably) feels resentment for her husband’s apathetic position in life after he drops out of grad school and refuses to get a real job. That said, she’s also quick to snap at those that annoy her, she’s argumentative and wholly unrelenting. On the other side of the spectrum, David plays the passive aggressive game, refusing to confront his issues or deal with conflict. At least, that’s how the couple begins the book – because a few chapters deep, the truth starts coming out, baby. Finally forced to confront their issues and decide whether or not they really care for each other (as the couple finds themselves in actual life or death scenarios), it’s kind of sweet how they reconnect over bludgeoning walking, ravenous corpses. At least…I found it romantic.

By the end of the novel, both characters grow so much and finally figure out what they want out of their wasted world. I personally loved the ride. Despite the fact that Married with Zombies walks a well-beaten road, I finished the book and, like any good zombie, was filled with the unholy desire for MORE. Err, more books, that is. Not brains. I immediately purchased book 2, and checked to make sure I have a copy of book 3. Mmmm. More. Braaaaaains.

David and I became warriors in the zombie plague on the first day, but don’t think that means we were front line soldiers or something. In truth we stumbled into the zombie battle because it was a means for pure, physical survival.

But I never would have guessed that unlike therapy, unlike the self-help books that littered our apartment at the time, killing zombies would save my relationship.

But let me back up. It all started on August 10, 2010. Wednesday was couples therapy day. It had been for six months, although I was beginning to think that all this talking and sharing and role playing that our therapist Dr. Kelly preached was nothing but a bunch of bullshit.

Despite her advice, despite all our visits to her office, David and I were on the brink. I had even researched divorce lawyers in our area on the internet. The thing was when I put “divorce lawyer” into the search engine on our shared computer… well, let’s just say that I didn’t have to type the whole phrase before it popped up in the system memory as something that had been searched for before.

So by the time we were driving down I-5 South into the heart of downtown Seattle toward Dr. Erica Kelly’s tidy, sterile little office, I was just going through the motions of therapy and making a mental list of all the things I didn’t like anymore about my husband.

The item I added to my list on August 10th was the CDs. You see, we share the car and the deal we’d struck was that since six CDs can fit into the changer, I could pick three and he could pick three. But as I cycled through the changer, keeping one eye on the road ahead of me, I realized that every CD was his.

That probably seems like a little thing, and in retrospect it was. But I guess that just goes to show you how far off the track we’d gotten.

I switched the stereo off with a flick of my wrist and glared at David from the corner of my eye. As usual, he was so wrapped up in one of those handheld games he loved that he didn’t even notice my annoyance. Or maybe he was so used to it, he didn’t care anymore. Either way, it sucked.

“Traffic seems pretty light,” he said without looking up.

I glided onto the off-ramp and looked around. As much as I hated to admit it at that point, he was right. We’d lived in Seattle since our marriage five years ago and traffic was one of the main things that drove me nuts about the city. At any time of day or night there seemed to be thousands of cars crowding the highways. Sometimes I wondered where the hell they all came from.

But today, at four-thirty in the afternoon, when there should have been bumper to bumper cars and trucks honking their horns and blocking the street, instead there were no more than a handful of vehicles around.

I shrugged as I stopped at the red at the bottom of the ramp and checked to my left before I started to roll out into the intersection to make a right. Just as I touched the gas, an ambulance screamed by. I slammed on the brake with a gasp and barely avoided getting t-boned, first by the veering ambulance and then by the five police cars that raced behind it.

“Shit, Sarah,” David barked, bracing himself on the dash of the car as he glared at me. His seatbelt strained against his shoulder. “Watch yourself.”

“You know, if you’re going to drive, maybe you should sit in my seat,” I snapped, though I couldn’t really blame him for being freaked out. I don’t think I’d ever come so close to having a major accident and my heart was pounding. Without saying another word, I waited for the green before I double checked for cars and made my turn.

Additional Thoughts: Books 2 and 3 are officially out (and I will be reviewing them very soon). Check out the fun, seriously cheesy covers (and titles and taglines): 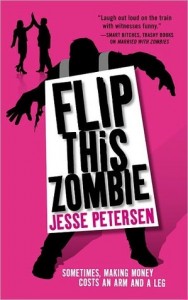 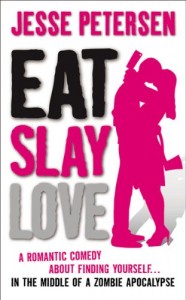 And, if you go to the author’s website, you can take a quiz to see if your relationship would last the zombie apocalypse. Check it out.

Reading Next: The Map of Time by Felix J. Palma