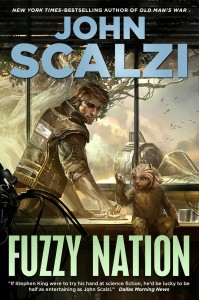 Jack Holloway works alone, for reasons he doesn’t care to talk about. Hundreds of miles from ZaraCorp’s headquarters on planet, 178 light-years from the corporation’s headquarters on Earth, Jack is content as an independent contractor, prospecting and surveying at his own pace. As for his past, that’s not up for discussion.

Then, in the wake of an accidental cliff collapse, Jack discovers a seam of unimaginably valuable jewels, to which he manages to lay legal claim just as ZaraCorp is cancelling their contract with him for his part in causing the collapse. Briefly in the catbird seat, legally speaking, Jack pressures ZaraCorp into recognizing his claim, and cuts them in as partners to help extract the wealth.

But there’s another wrinkle to ZaraCorp’s relationship with the planet Zarathustra. Their entire legal right to exploit the verdant Earth-like planet, the basis of the wealth they derive from extracting its resources, is based on being able to certify to the authorities on Earth that Zarathustra is home to no sentient species.

Then a small furry biped–trusting, appealing, and ridiculously cute–shows up at Jack’s outback home. Followed by its family. As it dawns on Jack that despite their stature, these are people, he begins to suspect that ZaraCorp’s claim to a planet’s worth of wealth is very flimsy indeed…and that ZaraCorp may stop at nothing to eliminate the “fuzzys” before their existence becomes more widely known.

How did I get this book: Review Copy from BEA (and signed by the illustrious Mr. Scalzi himself – whee!)

Why did I read this book: I was in the mood for something different. With a title like Fuzzy Nation, different definitely seemed to be on the docket. Having not read the original novel (or series) on which this reboot is based, I went into Fuzzy Nation with no preconceived notions (or biases) about what to expect…except, well, fuzzies.

Jack Holloway has always been the best at one thing: looking out for himself. With his latest contract with formidable intergalactic juggernaut ZaraCorp as a prospector on a class III planet hundreds of light years away from Earth, Jack and his trusty dog Carl (whom Jack has taught to detonate explosives) survey the planet for the next big mineral deposit to be explored and exploited for copious amounts of profit. When Jack accidentally blows up a cliff face – much to the frustration of the already PR-beleaguered ZaraCorp – he hits the jackpot. Jack has discovered a seam of the incredibly rare and precious gem sunstones, and as a disbarred lawyer that knows how to finagle his way into the best possible contract, Jack will soon become filthily, disgustingly rich. All that’s left to do is sit back and relax as the credits start rolling in.

Except there’s one small, slightly furry problem. When Jack returns to his makeshift home, he discovers that a strange feline-looking creature has broken in. Offering the admittedly adorable creature food and shelter, the little “fuzzy” soon leads his family to Jack’s outpost. In an attempt to get back on his ex-girlfriend’s good side, Jack invites Isabel (who also happens to be the resident biologist on Zarathustra XXIII) to check out the new, adorable mammalian species. Much to Jack’s chagrin, however, Isabel’s study of the fuzzies leads her to believe that the species is much more than just a new adorable species of intelligent pets. She believes they are sapient – which poses huge problems for ZaraCorp, and for Jack. Should the fuzzies turn out to be sapient creatures, capable of complex thought, reason and communication, ZaraCorp’s E & E license will be revoked immediately, leaving Jack’s potential fortune (and ZaraCorp’s billions of credits of financial security) in sunstone gems untouched. Jack’s got a big decision to make – but will he choose to look out for himself, once again? Or will he become champion of the Fuzzy Nation?

Well, color me impressed. Fuzzy Nation is flat-out fun. It’s the quintessential beach read for the geekish, for the lover of ewoks, for the champion of fanfic. As someone that loves all of these things (yes, even ewoks), reading Fuzzy Nation was a blast. The plot itself is simple and familiar – Big Bad Corporation wants to mine a relatively primitive planet for its incredibly rich resources. Species X – in this case, fuzzies – stands in Big Bad Corp’s way. A fringe group of humans, sympathetic to the fuzzies’ cause, also throw a wrench in the BBC’s machinations. At the end of the day, the greedy bad guys lose, the fuzzy-lovers win, and karmic balance is restored to the Force.[1. Yes, this is the plot of Avatar. It’s also similar to the plots of Pocahontas, Ferngully, Dances With Wolves, The Last Samurai, and so on and so forth.] Clearly, John Scalzi is pretty damn adept at plotting and storytelling, and Fuzzy Nation is no exception. Effectively playing on familiar tropes and somehow humanizing adorable furry creatures (there’s one section near the end of the book that seriously had me fistpumping in triumph for Papa Fuzzy), this novel completes the task it set out to accomplish by entertaining and emotionally engaging its readers.

But what about those tropes, you ask? You’re tired of reading about big bad ecologically corrupt corporations and righteous aliens and their human lovers, you cry![2. Not to imply that any humans and Fuzzies get it on blue alien style in this book. No. I meant love in the platonic sense, people. Yeesh.] Even if you are tired of this particular type of story, rest assured true believers, that Fuzzy Nation holds a few unexpected and very welcome deviations from the norm. What differentiates this novel from the rabble lies with Mr. Scalzi’s ambiguously motivated protagonist, and in the unexpected courtroom drama aspect of the novel (yes, you read that correctly). Jack Holloway, our intrepid protagonist, is kind of a puzzle. Though he claims to have been disbarred for noble purposes, though he is kind to his dog Carl and a generally easygoing, smarmy type of dude, Jack has a selfish streak. More similar to, say, Han Solo or Sawyer (from Lost), Jack is best at looking out for numero uno, and there are many times over the course of this book where I personally had no idea what exactly Jack would do. Almost more than anything, money seems to motivate Jack Holloway – even the kind actions he performs for the Fuzzies are questionably tainted by the betterment of his own self-interests. This ambiguity is a welcome trait, especially for a protagonist in this type of story (because, let’s face it – the selfless hero type is never as much fun as the renegade with a heart that just might be bought with gold).

The other unexpected and completely welcome aspect to Fuzzy Nation is the courtroom intrigue that colors and determines the fate of the eponymous Fuzzies. As a former corporate lawyer, Jack knows his way around courtrooms and cases, and it’s intriguing that unlike almost every other book or film that uses the Big Bad Corporation vs. Primitive/Indigenous Creatures trope, Fuzzy Nation climaxes not on a battlefield, but in a courtroom. The winners of this war accomplish their feat through bureaucracy, not bloodshed. It’s a pretty cool conceit (even if it is almost completely, utterly unbelievable).

Overall, Fuzzy Nation is a solid, completely entertaining read. One can’t help but wonder if Mr. Scalzi will go the route of Mr. Piper before him, and expand on a fuzzy universe. I’d certainly be up for reading more.

Jack Holloway set the skimmer to HOVER, swiveled his seat around, and looked at Carl. He shook his head sadly.

“I can’t believe we have to go through this again,” Holloway said. “It’s not that I don’t value you as part of this team, Carl. I do. Really, I do. But I can’t help but think that in some way, I’m just not getting through to you. We’ve gone over this how many times now? A dozen? Two? And yet every time we come out here, it’s like you forget everything you’ve been taught. It’s really very discouraging. Tell me you get what I’m saying to you.”

Carl stared up at Holloway and barked. He was a dog.

“Fine,” Holloway said. “Then maybe this time it will stick.” He reached down into a storage bin and hoisted a mound of putty in one hand. “This is acoustical blasting putty. What do we do with it?”

“Come on, Carl,” Holloway said. “This is the first thing I taught you. We put it on the side of the cliff at strategic points,” Holloway said. “Just like I already did earlier today. You remember. You were there.” He pointed in the direction of Carl’s Cliff, a massive outcropping of rock, two hundred meters high, with geological striations peeking out of the vegetation covering most of the rock face. Carl followed Holloway’s finger with his eyes, more interested in the finger than in the cliff his master had named for him.

Carl got a concerned look on his doggy face. Boom was a word he knew. Carl was not fond of boom.

“Right,” Holloway said. He set down the blasting cap, making sure it was nowhere near the blasting putty, and that the cap receiver was inactive. He picked up a third object.

“And this is the remote detonator,” Holloway said. “You remember this, right, Carl?”

“What’s that, Carl?” Holloway said. “You want to set off the acoustical blasting putty?”

“I don’t know,” Holloway said, doubtfully. “Technically it is a violation of Zarathustra Corporation safe labor practices to allow a nonsentient species member to set off high explosives.”

Carl came up to Holloway and licked his face with a whine that said please please oh please.

“Oh, all right,” Holloway said, fending off the dog. “But this is the last time. At least until you grasp all the fundamentals of the job. No more slacking off and leaving all the hard work to me. I’m paid to supervise. Are we clear?”

Carl barked once more and then backed off, tail wagging. He knew what was coming next.

Additional Thoughts: As mentioned above, Fuzzy Nation is a reboot of Piper’s Hugo nominated Little Fuzzy (which I will be checking out sometime soon). 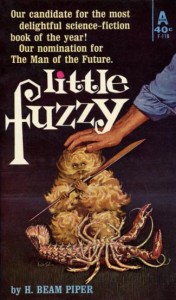