Title: The Lost Heiress (formerly Interrex in the UK & Australia/NZ) 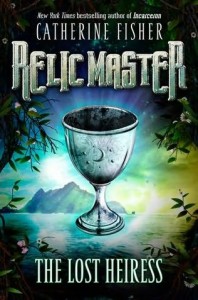 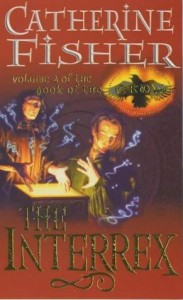 The second installment in the Relic Master quartet!

Even though Tasceron and its Emperor have fallen, there is a rumor that the heiress to the throne still lives. If so, her life is in grave danger, especially from the Watch. Galen and Raffi must race to find and protect her.

Stand alone or series: Book 2 in the Relic Master Quartet

How did I get this book: Review Copy from Publicity/Publisher

Why did I read this book: It’s no secret that I am a fan of Ms. Fisher’s work. Having read and thoroughly enjoyed The Dark City, book 1 in the Relic Master tetralogy, I could not wait to get crackin’ on book 2. Thanks to a pretty cool marketing campaign and publishing schedule thrown together for the US release of the series, thankfully, I didn’t have to wait long to get started on The Lost Heiress.

**WARNING: This review contains unavoidable spoilers for The Dark City, book 1 in the Relic Master quartet. If you have not read book 1 or do not wish to be spoiled, look away! You have been warned.**

In the dramatic conclusion of The Dark City, Master Keeper Galen finds a way to recover his lost powers and makes what could be the single most important discovery for the world of Anara. In the smoking, rotted ruins of Tasceron, the determined Galen makes contact with the Makers – those men from the stars worshiped as Gods by the Order – and through garbled transmission, one message comes is clear. The Makers are coming.

With his newfound abilities, Galen and his apprentice Raffi steal back the relic taken from them by a ruthless thief-lord, inciting the dwarf’s wrath and pursuit. But the duo have a more important problem at hand when they discover that the murdered Emperor has a lost heir, the so-called Interrex, and only Raffi and Galen can find the child and restore order to Anara in time for the Makers’ arrival.[1. An Interrex, if you didn’t know and had to look it up (like I did), is an interim ruler. Historically, the Interrex was a temporary head of state during the interregnum between two Roman consulates (from Wikitionary).] With the help of one of the catlike Sekoi and the duplicitous Watcher Carys, young Raffi and his master are on a desperate chase to find the lost heir before the Watch does.

Picking up shortly after the dramatic conclusion of the first book on a midnight heist for their stolen relic, The Dark City resumes the action of the first book, but takes the story in a new direction. Instead of rushing to the arrival of the long-lost Makers, this second book focuses on a new revelation with the existence of a lost bloodline and possible leader. As Raffi and Galen flee their pursuers and strive to find the Interrex, they meet up with Carys, who has a serious problem of her own in the form of a high ranking Watchman that knows of her duplicity. While this focal shift is a little frustrating – especially with that tantalizing glimpse at the interstellar colonists that the “Makers” truly are at the end of book 1 – Catherine Fisher is true to form in this second novel, elaborating on the intricate, dark history of Anara and the apocalypse that has rocked this strange alien world. While the main storyarc was a little underwhelming (the quest for a lost heir completely unmentioned in the first book), I loved the subtle developments in the history of this world, told through chapter epigraphs and legends of the Maker called Kest and his betrayal of his people with his experiments. There’s also the implication that Kest’s legacy remains in Raffi and Galen’s time, and that the Watch has a more deadly purpose than simple anti-religious fervor.

While The Dark City was an exercise in masterful plotting and worldbuilding, The Lost Heiress is a study of character, particularly for double-agent and spy Carys. The young, jaded girl faces tough decisions in this book as she must choose to take a leap of faith, or play role of the faithless Watch spy, playing her friends in exchange to save her own skin. Her character arc is a moving one that defines the novel, as she’s forced to come to grips with her emotions: rage at her own stolen childhood, fear and anger both at the extortion she faces at the hands of the Watch. And by the end of the book, whoo-boy, is there an emotional reckoning.

The other characters are developed too, though this is clearly Carys’s book. Galen remains one of the most intriguing characters of the group with his dogged fervor, to the point of fanaticism. The Sekoi, too, are explored and fleshed out in this novel, with their own particular brand of faith. The only character that I wish could be further explored is the primary narrator of the series – Galen’s young apprentice, Raffi. Still playing second fiddle to his master and naively passive, Raffi is a character that I can sense will have to play a much larger role in the books to come. He has an interesting relationship with his master, but one that could use more exploration – but I fully expect this to come in further books.

As second books go, The Lost Heiress does a solid job of keeping readers engaged and furthering the overall storyarc. Ending on another dramatic high note, this second installment is more than enough to keep readers satisfied, yet hungry for more. I certainly know I am.

Additional Thoughts:The publisher is doing something pretty cool with this rebranding/rerelease of The Relic Master books, by splitting up a map of the world on the reverse side of each book jacket. When the four books have been released, readers will have a wonderful, full color version of a map. And as I am an absolute sucker for maps (seriously – fantasy novels with maps and/or some kind of physical visualization will almost always get read before those that do not have them), I find this gimmick really cool and a good excuse to collect all the books in hardcover format. 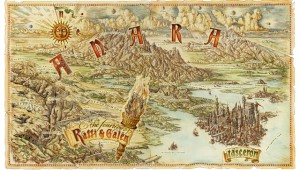 Also, make sure you stop by and check out our Q&A with the truly excellent Catherine Fisher for a chance to learn more about her writing, her fascination with blending genres, and to win a copy of The Lost Heiress.

Rating: 7 – Very Good; although I wavered between a 6 and 7, the worldbuilding and character development were enough to push this one past its predecessor (at least in my eyes).

Reading Next: Divergent by Veronica Roth