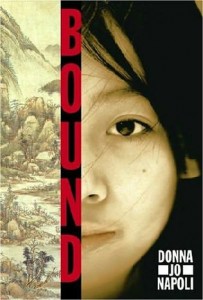 Bound to her father’s second wife and daughter after Xing Xing’s father has passed away. Bound to a life of servitude as a young girl in ancient China, where the life of a woman is valued less than that of livestock. Bound to be alone and unmarried, with no parents to arrange for a suitable husband. Dubbed “Lazy One” by her stepmother, Xing Xing spends her days taking care of her half sister, Wei Ping, who cannot walk because of her foot bindings, the painful but compulsory tradition for girls who are fit to be married. Even so, Xing Xing is content, for now, to practice her gift for poetry and calligraphy, to tend to the mysterious but beautiful carp in her garden, and to dream of a life unbound by the laws of family and society.

But all of this is about to change as the time for the village’s annual festival draws near, and Stepmother, who has spent nearly all of the family’s money, grows desperate to find a husband for Wei Ping. Xing Xing soon realizes that this greed and desperation may threaten not only her memories of the past, but also her dreams for the future.

In this searing story, Donna Jo Napoli, acclaimed author of Beast and Breath, delves into the roots of the Cinderella myth and unearths a tale as powerful as it is familiar.

Why did I read this book: I’ve had my eye on Donna Jo Napoli for a while, and when I saw this title available as an ebook through B&N, I couldn’t resist. A Chinese retelling of Cinderella?! How could I resist?

In Ming Dynasty China, Xing Xing leads a quiet and lonely life. After the death of her mother when she was a child, and her father’s recent passing, all Xing Xing is left with is her father’s second wife, Stepmother, and a half-sister, Wei Ping. Though she has no dowry, Stepmother is determined to marry Wei Ping off to a respectable man, and so binds her daughter’s feet (though she is much older than the ideal age for initiating the process). While Wei Ping suffers the excruciating pain of her binding, Xing Xing, or “Lazy One” as she is called by Stepmother, is left to care for the household chores. Seeing her half-sister’s pain and inability to leave their cave, Xing Xing does not mind her place and takes solace in the memory of her calligraphy and composition, skills her father encouraged her to develop when he was alive. But when Wei Ping’s bound feet begin to fester and putrefy, it is up to Xing Xing to fetch the help of a traveling medicine man, and save Wei Ping from a slow, seeping death.

Although it is technically a Cinderella story, complete with a ball, a prince, and a missing slipper, Donna Jo Napoli’s Bound is much more a tale about three women – Xing Xing, Wei Ping, and Stepmother – their roles, and their relationships with each other. Although the tone of the novel is geared towards younger adults and middle grade readers, Bound is a beautifully written, deeply layered and subversive novel, filled to the brim with questions of family, the role of women, and the notions of independence versus tradition.

In Xing Xing’s China, young women who mean to attract any sort of prospects must have their feet bound to achieve the graceful lotus shape and desirable gait. While Wei Ping’s feet are literally bound in order to be physically attractive and societally acceptable, Xing Xing also finds her self bound, by her precarious family ties. Although, like Xing Xing, some women had become educated in calligraphy and other arts, her world is still one steeped in tradition, and without a dowry or any potential for marriage, she relies on the kindness of Stepmother and the protection of her ancestors to keep from being sold as a slave. Stepmother herself is another intriguing character bound in her own way, by her own past and role in the world as a widowed wife who was unable to produce a male heir, and unable to attract a husband for her only daughter. Desperate to provide food and a living for her family, and to ward away a bad luck demon that she insists has taken over their cave, Stepmother is not the Disneyfied caricature of “Evil” – not by a long shot. The murky, tense relationship these three women share cannot be so simply reduced to labels like “good” and “bad” but are complicated, believable tangles of duty and emotion.

Rife with historical detail, tradition, poetry, and a touch of the fantastical (a particularly interesting twist on the idea of a “fairy godmother”), Bound is one of the finest retellings of Cinderella that I have ever read, and one that I highly recommend to everyone. Although, granted, there is little romance and the actual Cinderella story itself plays a very small, minor role overall, Donna Jo Napoli’s writing and thought-provoking themes are the true draw to this memorable book. Though parts are violent and gruesome and others are poetically beautiful, Bound is a moving reimagining that is not to be missed.

Xing Xing squatted by the water, silent and unmoving. Her stillness was a prayer.

It was answered: The sun glinted red. Only an instant and it was over, but there could be no doubt; her eyes had not played tricks: A white fish with red fins and golden eyes zipped past and under a lotus leaf. She laughed in delight.

“Lazy One, bring the firewood,” came the distant call.

In the past year “Lazy One” had practically become Xing Xing’s household name. She imagined her father’s wife holding one hand above her eyes against the sun that was so bright today, it had already burned off the morning fog. She imagined her frowning in impatience, then ducking back into the shadows of the cave. The girl picked up the armful of wood she’d gathered and rushed back along the path. Her hair was tied in two hanging knots that thumped on her shoulders as she ran. Hurry, they drummed, hurry hurry. The cold dirt licked at her feet. Hurry hurry.

But she was wrong. Stepmother had not gone inside. The woman shivered in the chill of spring, arms crossed over her chest. “Get inside, Lazy One.” She yanked one of Xing Xing’s hair knots as the girl raced past through the open door.

The air of the main cavern had changed already. While the roof was so thick that the temperature hardly varied from summer to winter, the quality of the air could change drastically. Right now it had grown clammy. Xing Xing knelt and fed tinder to the coals of the dying fire, then sticks, then the wood she’d just brought in. The door squeaked shut behind her. Stepmother didn’t oil the hinges on purpose because the noise scared away demons. Xing Xing got to her feet and turned around to find Stepmother standing right there, her hands on her hips, her muscled arms cocked like wings.

Xing Xing knew this was Stepmother’s way of asking why she’d come from the direction of the pond rather than the woods. She’d seen the beautiful pool fish twice now — yesterday afternoon and again this morning. It was her secret. Stubbornness entered her. She looked in Stepmother’s eyes without blinking.

“But water does.” Stepmother hobbled over and picked up the water bucket and carrying pole. She hobbled back and put one in each of Xing Xing’s hands. “Are you waiting for grass to grow under your feet?”

Xing Xing ran out the door again, leaving it open. She rushed through the buzz of the bees they kept in the hive on the side of their cave. Rush rush, buzz buzz.

“My daughter will wake soon,” called Stepmother after her. “And hunger hurts.”

Xing Xing returned to the pond, only too happily. She filled the bucket, then walked around the edge, looking. The thought of Stepmother’s daughter waking and complaining of hunger quickened her pace.

It wasn’t that her half sister would be truly hungry, not like the old beggar men who wandered the village, hands outstretched, and slept at night under the raised floor of the public pavilion. Rather, her half sister’s stomach would simply have emptied of the meal she ate last night. But she felt so poorly these days that Xing Xing didn’t want to allow even that small amount of extra discomfort. Besides, her complaints could result in a smack on the head for Xing Xing.

The fish didn’t show itself.

Additional Thoughts: Donna Jo Napoli is a completely new-to-me author, and she has an extensive award-winning backlist. I’m particularly interested in Beast (a Persian retelling of Beauty and the Beast, from the Beast’s perspective) and her new novel, The Wager. 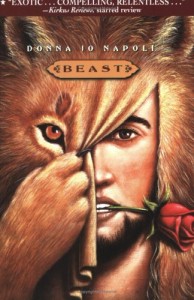 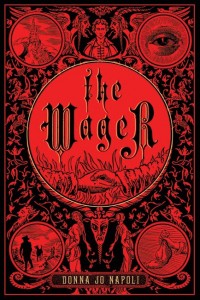 Does anyone have any other recommendations?