Who: Jane Litte, of Dear Author, one of the most excellent and comprehensive Romance (with the occasional review of UF, Fantasy and YA) sites in the interwebs. Jane and her fellow reviewers cover all sorts of Romance with in-depth reviews, as well as writing thoughtful articles about the genre (like this recent one about Reader’s Consent). Jane is also quite possibly one of the most knowledgeable people when it comes to ebooks and everything related to digital content.

Everybody, please let’s give a warm welcome to Jane!

I’m an inveterate reader of backlist titles so at the end of the year, maybe half of the books I’ve read aren’t even published in that year. This is truer today than ever given that digitization of backlist titles are making older books increasingly more accessible.

These end of the year lists are such a struggle because sometimes my best books are old books but given that the Book Smugglers didn’t require me to stick to any publishing date (unlike what I do to my own bloggers!), I decided to share a few titles that really sang for me even though some of them were published years ago.

Before I get into my list, it should be noted that I read romance and sometimes I read very explicit, very sexual romance and my favorites of the year reflect this.

I was first introduced to Michelle Reid’s writing via the WeWriteRomance Blogger Bundle put together by Harlequin Books. In the first volume, the bloggers included The Brazilian’s Blackmailed Bride.

This book prompted a strong emotional response from me, enough that I went out and purchased a number of Reid’s backlist titles. Two of them stood out for me. The Bellini Bride and The Gold Ring of Betrayal. 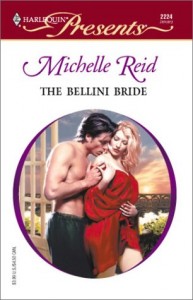 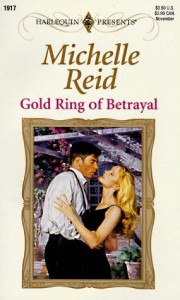 Both of these books take the original romance formula and some very common romance tropes and turn them slightly on their head. In the Bellini Bride, the heroine is notorious for posing nude for a well known artist. Her notoriety is part of her lure for the hero but it keeps him from viewing her as marriageable material. In subtle ways, this book takes on the notion of the lady on the street and the whore in the bed concept in that Marco, the hero, must realign his attitude toward art, nudity, and respectability.

In The Gold Ring of Betrayal (not in print or digital), the hero and heroine are estranged but the heroine has called on her wealthy husband to find out who has kidnapped her daughter, the daughter that the estranged husband believes is the product of an affair. This supposed affair led to the separation between the hero and heroine. The setup isn’t uncommon for romances but both parties come to a conclusion about the future of their relationship that is uncommon, particularly given the time that Reid spends to build up how deeply offensive it was to the hero that the heroine had betrayed him. 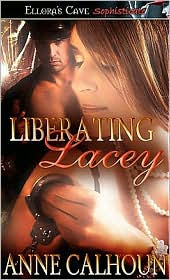 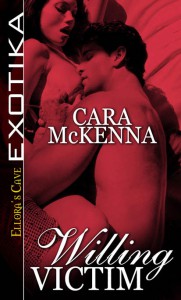 Liberating Lacey is an older woman, younger man story but it’s more than a story about age differences; the real conflict is more about class differences. The heroine is a very wealthy, professional and the hero is a cop. For the heroine, Lacey, these differences are meaningless, but probably because despite her divorce has a strong self image. What she has lacked for a long time, however, was adventure in the bedroom. Hunter, the hero, brings that in the form of a risky parking lot adventure to role playing the ultimate bad cop scene. What he can’t bring, however, is his heart because one rich girl has already wreaked havoc with it.

I hesitated to bring up this next title because there has been more than one discussion of the rape trope in fantasy and YA books here at The Book Smugglers. Willing Victim is about a girl who has been living her life in idle. One day she meets a guy who is not her type, as he informs her while turning down a flirtatious invitation to meet up at a later date. What Flynn means by “not her type” is that he likes to have very rough sex.

For me, rape is all about the power and not about the sex itself. For a man to rape a woman is about the most power he can wield over her. It’s a violation, internally and externally; physically and emotionally. In Willing Victim, however, the taken-by-force sexual scenes are fantasy role playing for the characters.

We talked about the issue of consent at Dear Author, about how a reader consents for the characters. To a great degree, a book like Willing Victim works only in so far as you, the reader, believes that the willing victim is giving consent the entire time. Lauren is tired of making decisions, tired of being in control of her emotional response and with Flynn, she can let that all go. This book isn’t going to work for everyone but I think it’s illustrative of how the giving of consent can be empowering for a woman in a sexual situation. I don’t think there is any equivalence between the scenarios in Willing Victim and the rape trope that seems to be the de rigeur basis for character development in females. There are a lot of flaws in the story, but the issue of consent is done right or at least it was done right for me.

Of course, I did plenty of reading of 2010 published books. I thought Loretta Chase’s Last Night’s Scandal was some kind of wonderful. 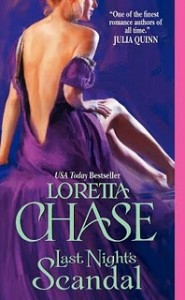 The managing and spirited Olivia trying to bring about her own happy ever after by trying to ensnare her best friend and love of life, Peregrine, was one of the best heroines of recent memory. Chase has always been known for her strong and capable heroines and Olivia was cut from that same mold.

Finally, I fell in love with the steampunk genre with Meljean Brook’s The Iron Duke. 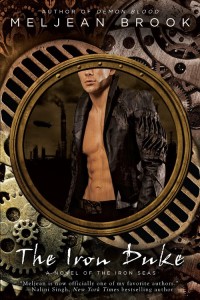 What I thought was so amazing, though, wasn’t the steampunk world building. Yes, the tight integration of the steampunk technology with the plot and the overarching political unrest was great. Yes, the delicate balance between history and science was well done. But what really was so moving for me was the way in which Brook deals with race. How Mina struggles with everyone seeing the Horde (bad guys) in her face whereas everyone sees Rhys for his deeds, as an individual. Isn’t this the very heart of racism – judging people by how they look instead of how they act? Mina, a woman of mixed race, was judged by how she looked instead of all the passion she put into creating a safe place for the people who despised her on a regular basis. For me, Meljean Brook’s The Iron Duke was so tremendous because it reached beyond science and history into the personal space of a reader.

Thanks for inviting me to be part of Smugglivus 2010!

Thank you and Happy Smugglivus to you, Jane!