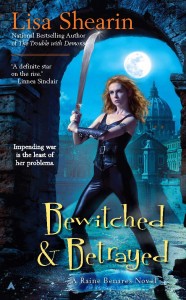 Benares. I’m a seeker. I find lost things and missing people — usually alive. Finding the specters of six evil mages who escaped the Saghred, a soul-eating stone of unlimited power, was easy. Stopping them before they unleash Hell on earth just may be the death of me.

Being bonded to the Saghred wasn’t my idea — neither is hunting down its escapees. Especially not when one of them is also hunting me. He’s regenerating his body by taking the lives of powerful victims, along with their memories, knowledge, and most important of all, their magic. The dark mage wants control of the Saghred, and if he gets it, he’ll become an evil demigod whom no one can stop. The only thing in his way is me.

One of us doesn’t stand a ghost of a chance.

Stand alone or series: Book 4 in the Raine Benares series

Why did I read this book: I’m a big fan of Raine Benares and her constant death-defying shenanigans as she tries to fend off the dread Saghred’s power. Again, took me a while to finally pick this fourth book up, but better late than never…right?

** THIS REVIEW CONTAINS UNAVOIDABLE SPOILERS FOR BOOKS 1-3** If you have not read the first three Raine Benares books and wish to remain unspoiled, LOOK AWAY! You have been warned.

Life hasn’t been easy for Raine Benares as of late. After being inadvertently bound to the Saghred, the most powerful soul-sucking magical source in existence, Raine’s life has gone from simple to nightmarishly complicated. And, after truly evil goblin Sarad Nukpana has escaped from the rock’s clutches, Raine finds herself and all those she cares about in desperate danger. Nukpana has started to feast on influential people in the isle of Mid – and framing Raine and those who wish to protect and help her in the process. Even worse, Nukpana has a message for Raine – he plans on devouring the souls of Raine’s friends and family, and finally Raine herself, in order to gain control of the Saghred. Stopping the undead mage is only one of Raine’s problems, and as the Saghred grows ever-hungrier for souls of its own, Raine finds the call of its power getting harder and harder to resist.

Overall, Bewitched and Betrayed is another solid entry in Raine’s ongoing (mis)adventures. This fourth entry picks up shortly after the conclusion of The Trouble With Demons – Raine has maintained her tenuous control of the Saghred, with the help of her shared umi’atsu bond with both elvin Paladin Mychael and former black mage (and goblin royalty) Tam. Though the bond allows the trio to share thoughts and emotions without words and collectively maintain some semblance of control over the insatiable Saghred, it also means that Raine, Mychael and Tam have another secret they must hide from the bureaucrats and authorities that long for nothing else than to lock Raine away in a room and exploit her power to serve their own interests. It seems everyone wants a piece of Raine these days, from evil Sarad Nukpana to the weasel-y Carnades and his ilk. As usual, Bewitched and Betrayed is faced paced with a string of action-packed scenes leading to a pretty killer magical showdown hostage-standoff situation (awesome). However, I found this book to be slightly slower getting off the ground than its predecessors, with a good deal of reminding readers of prior events and characters, resulting in (at least initially) an exposition-heavy read. That said, any irritation was temporary as the action picks up and the story gets formally under way – I loved the new developments in the overall plot and the direction Raine’s bonding with the Saghred is taking, as she finds herself increasingly tempted to use its significant powers. Also, on a kind of geek aside (and I don’t know if I’m just reflecting too much on this because I have Harry Potter on the brain), but there’s something distinctly Voldemort and Dementor-esque with Bewitched and Betrayed, with Nukpana’s regeneration thanks to the help of lackeys and the role of Reapers drawn to Raine and sucking souls from her and the Saghred. But I digress.

As far as characters go, while Raine remains a funny, snappy heroine, there’s more than a little…how shall I put this? ego-stroking early on that had me rolling my eyes (e.g. Mychael telling Raine how she’s strong and stubborn and the bestest person ever to take care of the Saghred because she’s so awesomely Raine). There’s a frustrating thread of everyone trying to protect Raine, too, which is starting to rub me the wrong way (but this is strictly personal preference and I’m certain other people feel otherwise!), what with Raine’s long lost father trying to protect her, Vegard and his fierce, dogged loyalty, and of course Mychael with his magic healing hands and infallibly protective instincts. I guess, I kind of want Raine to step up and start protecting herself a little more (even though she does rush to the rescue of her friends and Mychael and others trust her as capable enough to take of herself, it’s still a little irksome to see everyone fawning over her). Now, while Raine may not have won me over so much in this book, there are a few revelations about Mychael that are pretty cool – we learn he’s not quite the squeaky clean knight in shining armor that perhaps we thought he was (I always wish for more Tam, but Mychael’s not bad, either). And while we’re on the subject of Raine’s love interests, I kind of feel like this is the year of relationship resolutions in some of my favorite Urban Fantasy books – Kate and Curran get their shit together in Ilona Andrews’ series, Mercy and Adam figure out their own bond in Patricia Briggs’ books, and now the Raine-Tam-Mychael triangle finally comes to a resolution. As a loyal Lost and BSG geek (and former hardcore shipper), I loathe protracted love triangles (or god forbid, quadrangles or higher polygons) – so I was very, very pleased to see this love entanglement come to a clear, believable and natural conclusion.

Bewitched and Betrayed ends on a high note and with much promise for the next book in the series and the involvement of the goblin court (Sweet! More goblins! FINALLY!). Not my favorite book in the series, but a solid entry nonetheless, and I eagerly look forward to the release of Con and Conjure next year.

Notable Quotes/Parts: From chapter one:

I was being chased by a pissed off naked guy with a knife. A really big knife.

Him being naked was expected since I was doing my ducking, weaving, and dodging down a hall in the Isle of Mid’s finest bordello. You’d think that the worst that could happen to me was acute embarrassment and possible death. But this naked guy was possessed by the specter of a three-thousand-year-old, evil elven sorcerer who’d turned Mid’s red-light district into his personal playground. I’d interrupted recess, and he was mad as hell.

My name is Raine Benares, and I’m a seeker. Tonight I’d found what I was looking for, as well as things I never wanted to see. The men who frequented The Satyr’s Grove were here because they had money, not muscle tone. These weren’t your finer specimens of manhood. And believe me, I got to see enough manhoods and fleeing pasty white posteriors to last me a lifetime.

Even worse, the sorcerer’s specter had picked himself a young, fit, and fast body, not an old, flabby, and slow one. But on the upside, apparently slinging spells was a challenge when wearing someone else’s skin. Hence the big knife and bad attitude.

There were screams, shouts, and chaos from the first and second floors. We now had the third floor hallway all to ourselves. Everyone had either fled downstairs, or barricaded themselves in the bedrooms that lined the hall. Unfortunately in The Satyr’s Grove, the more expensive ladies were on the top floor, and our quarry had decided to splurge. I’d gotten separated from my Guardian bodyguards in the stampede of working girls and clients on the two floors below. I couldn’t stop to wait for them. I’d been tracking this specter all week; I’d found him, and he was not getting away.

“Get him to stand still,” shrieked the necromancer.

Yeah, I was sure he’d do that, just as soon as he got close enough to start killing me. The specter-possessed man was chasing me. Sid the necromancer was chasing the man, waving around a little drawstring bag of something he’d promised would keep the specter in his host body until an exorcist could extract him. With a choice of a naked guy with a knife versus an evil sorcerer with three thousand years of practice, I was all for the specter staying right where he was. Then it wouldn’t matter if the containment box that was downstairs found its way upstairs. Whenever we’d gotten a lead, one of the necromancers from the college’s necrology department had gone with us. Sid had definitely drawn the short straw tonight.

My job had been to find the specter; that’d been the easy part. But judging from the ruckus and outraged upper-class sounding voices coming from downstairs, Mychael and his boys had caught some of Mid’s elite with their trousers down or their robes up. Being caught being naughty by the commander of the Conclave Guardians and a dozen of his best knights had heaped mortification on top of outrage.

So until Mychael could cut through that crowd with the containment box, it was just me and Sid.

And a dead-end hallway.

You can read the first three chapters online HERE.

Additional Thoughts: Book 5 is already in the pipeline, scheduled to hit stores early next year! Here’s the breakdown: 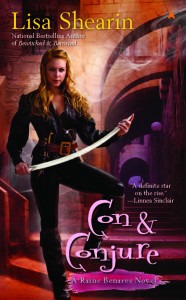 My name is Raine Benares. I’m a seeker who finds lost things and missing people. My relatives, on the other hand, steal things. They’re the most notorious criminal family in the seven kingdoms. Sometimes I wonder if they have the right idea, especially since what I’ve found lately is likely to get me killed. And the Saghred, a soul-stealing stone that has given me unlimited power, is to blame for every last bit of it.

Ever since the Saghred bonded to me, the goblin king and the elven power brokers have wanted to possess its magic themselves. But to get it, they’ll have to get me, and their pockets are deep enough to make that happen. With the help of my highly qualified family, I’ve rigged the perfect con—one that will financially ruin the elves who are spoiling for war. My family’s run elaborate scams before, but none involving this much money, government officials this highly ranked, or a war this close to starting. In our way is a goblin thief who’s after the Saghred, and my ex-fiancé—an elven assassin who may be after me. I broke up with him. Let’s just say it could have gone better.

If either the goblins or the elves get their hands on the Saghred, they have every intention of using it. Which means total annihilation will be inevitable…

Reading Next: Foundling by D.M. Cornish