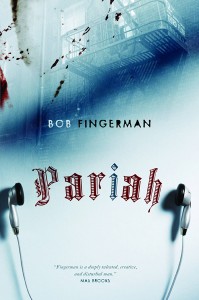 Stand alone or series: A stand alone (I guess?), although there’s nothing in the way of resolution so technically could be part of a series.

The world is in chaos. A zombie plague has devoured every nation on the planet. New York City is no exception. Imagine eight million zombies. Shoulder to shoulder. Walking the streets, looking for their next meal. The residents of one apartment building have bonded to keep themselves safe from the onslaught, but their inevitable demise lurks right outside their window, a constant reminder of the doom that awaits them. Forced to remain in the safety of the building, the tenants find themselves at each others’ throats. When they spy a lone teenage girl who walks among the hordes, unattacked by the undead, their world opens up.

Why did I read this book: I have a thing for zombies and the zombie apocalypse. Also, Bob Fingerman’s work in the comics medium is some good stuff, so I was excited to read his second prose novel. Did I mention zombies? Yes? Ok then.

After reading the synopsis, I was really excited for Pariah. So, when I learned Mr. Fingerman would be signing at BookExpo America, I engraved that baby on my calendar, set an alarm reminder on my phone – heck, I even dragged Ana in line to wait with me. Needless to say, I really, really wanted to read this book.

Sadly, Pariah simply failed to extend beyond the sparkle of its premise – the book, though descriptively detailed and sufficiently gritty, failed in its characterizations (the usual stereotypes) and its plotting (banal, with barely any plotting, tension, development or resolution), without anything in the way of metaphor or significance to set it apart from a sea of other zombie novels. Perhaps, at its core, Pariah is the basest personification of the zombie in our current culture: entertainingly grotesque, all sound and fury but ultimately, disappointingly, hollow.

It has been months since the unthinkable has happened – the dead have come back to life, and New York City has been reduced to a wasteland of walking, rotting corpses. One apartment complex, however, stands fortified and safe from the milling zombies below, although they are rapidly running out of food, and the residents are increasingly resembling their undead counterparts outside. All that changes, however, when a young, healthy, alive girl is seen outside walking amongst the zombies, untouched. Able to come and go at will, this mysterious girl can get food and other supplies that the entombed apartment residents cannot, and, at the brink of starvation, they are desperate for her help. Mona’s arrival changes everything for the apartment residents, and as they regain their strength and health with Mona’s help, they begin to wonder why she can walk around untouched by the undead, and they plot to uncover her secret.

In theory, this synopsis sounds engaging and sufficiently original. In practice, however, Pariah comes up far short of entertaining. From a writing perspective, Pariah has basically no plot. The catalyst for the story – the arrival of Mona – takes place halfway through the novel, and everything before that serves as mere exposition and filler. I suppose one might call it “character development,” although this is a bit too sophisticated a term for Pariah‘s dramatis personae (but more on that in a bit). From Mona’s arrival onward, there is potential for an actual plot to coalesce – potential that is sadly glossed over, trading more stilted character interactions for anything resembling an actual story.

To be sure, a lack of a plot or a slower pace does not automatically mean a poor read – there are countless slow-moving novels and stories without concrete plotlines/central conflicts that are amazing, made so because of their excellent characterizations, superb writing, or some other factor. Unfortunately for Pariah, this lack of plot comes with nothing else to recommend it. The characters are all ludicrous stereotypes: The meathead, macho, conservative, homophobic Italians (who actually are homosexual). The beautiful but sexually manipulative and selfish woman. The “cool” and moody artist. The sage black man. The innocent, stupid kid (that turns to religious zeal, because of course, every apocalypse novel needs one of those!). The old, squabbling Jewish couple. These are all caricatures to the extreme, offering nothing new or insightful to the story. Add to these supposedly “gritty” characters writing that tends to an odd fascination with bodily processes, bizarre sexual preoccupations, and all-around uninspired prose, and any minimal, remaining appeal Pariah may have held disintegrates. (On a more personal note, I’m particularly uncomfortable with Mr. Fingerman’s opinion of women – Ellen’s inner thoughts are frustratingly self-serving, and Mona herself a hollow, pointless fixture).

Had these two-dimensional characterizations been a stylistic choice on the author’s part to say something, ANYTHING, significant, Pariah may have been salvaged. The only reason I finished this book was in wild hope for something else to happen, for some grander scheme to be unveiled in the late chapters (was this meant to be a metaphor for drug addiction? an insight to sexuality and sexual politics? something?!). But, Mr. Fingerman’s overall purpose with the novel remains consistently and thoroughly uninspired to the end. The book accomplishes nothing. With no plot to speak of, no underlying metaphor, no solid writing to recommend it, the novel is ultimately insignificant, following a cast of pathetic stock characters doing terrible things to themselves and to each other. The end result is gratuitous, irrelevant, and frankly (perhaps most egregiously, considering this is a zombie novel!) boring.

I take back what I said about Pariah being a literary personification of the zombie – for that’s not fair to the zombie. Like its alluded titled character, Pariah is frustratingly blank and hopelessly superficial. Like Mona, Pariah comes in a deceptively pretty package, but gutted of any personality, depth or significance.

Larry Gabler lay there, gasping, bleeding. At seventy-two, he was Abe’s junior by eleven years, but at the moment he could have given Methuselah a run for his money.

“You gotta get home to Ruthie,” he wheezed as sweat glossed his waxy face.

“Yeah, yeah,” Abe said, pouring himself a stiff one from the bottle in his desk. The radio droned the barely cogent reportage of nervewracked correspondents attempting to articulate what was happening throughout the five boroughs—not to mention the entire globe. Abe took a tentative sip of the whisky, then downed it as he sauntered over to the window to catch an eyeful of uncorked chaos below. As he peered down, three taxis collided, the driver of one bursting through his windshield like a meat torpedo. People were jostling, shoving, climbing all over each other, every man for himself, the hell with the rest. The sounds of screams and random gunfire echoed in the darkening canyon of office buildings, the sun ducked for cover beyond Jersey to the west. Mixed in with the usual filth in the gathered curbside snowdrifts was a new hue: deep red, and plenty of it, like big, bloody snow cones.

“Oh yeah, I can’t wait to get down into all that,” Abe said.

The stray who’d brought Larry limping in cowered, nearly catatonic, on the other end of the waiting room’s lumpy sofa. She was a good-looking young Puerto Rican, maybe in her early to mid twenties. Maybe Dominican. Abe couldn’t tell. Young was young, old was old, Hispanic was Hispanic. Larry let out a chalky groan, farted loudly, and slumped forward, chin on chest, blood oozing from his nostrils.

“I think your friend is dead,” the Latin girl murmured.

“He was dead when he came in,” Abe replied. “I could smell it all over him. You get to my age and death’s one of the few things you can recognize easy.”

Abe looked at the blood-soaked material around Larry’s chewed up calf, the slacks shredded. He downed another shot of whisky and made for the door.

“Where you going?” asked the girl.

Without explaining, Abe left the office of Cutie-Pie Infant Wear and hastened down the hall to Menachem Bender Men’s Big & Tall to pay a visit. Abe tried the door. Locked.

“Bender, you in there?” He pounded a few times, rattling the pebbled glass with Bender’s name and logo painted upon it. “Bender, c’mon! It’s me, Abe Fogelhut! You in there?” No answer. Abe cased the hall, then elbowed the loose pane out of the frame, the glass crashing to the linoleum beneath. Taking care not to cut himself, he opened the door, experiencing the giddy thrill of breaking into his neighbor’s business as well as a jolt of bowel-tightening fear. “Bender!”

Abe gave the unlit room a quick once over, then stepped in, flicking on the overhead fluorescents, which buzzed in protest. A cursory look at Bender’s books made clear Cutie-Pie wasn’t the only outfit in the garment trade to have a lousy last quarter. “Oy,” Abe sighed. “My condolences.” Abe stepped around the desk toward the storeroom, nearly tripping over Bender’s body, a .38 clenched in his white-knuckled hand. Bits of skull and brain matter flecked the adjacent wall and floor. Abe raised a hand to his mouth and then lowered it, realizing he was going to neither scream nor throw up. He just shook his head and opened the stockroom, repeating his previous sympathies. Turning on the light, he allowed himself to smile.

Moments later, he returned to Cutie-Pie to find Larry hunched over the Latina, violently munching on her entrails. The contents of Abe’s stomach disgorged, searing his throat. Larry didn’t even look away from his still-twitching repast as Abe, grateful he’d retrieved the revolver from Bender, emptied the cylinder into his undead partner. The fifth shot removed the top of Larry’s skull and he collapsed onto the girl’s remains. Abe spat bile onto the floor, took a gulp straight from the bottle of Cutty Sark, swished it around, then spat again.

“Okay,” he said, affecting as much calm as possible. “Okay.”

Additional Thoughts: If you want a real “thinking man’s zombie novel” (as one blurb on this book claims Pariah is), I strongly recommend you check out the writing of Kim Paffenroth (Dying to Live) or Max Brooks’s World War Z.

Reading Next: The Child Thief by Brom

Over at Kirkus: The Six-Gun Tarot by R. S. Belcher