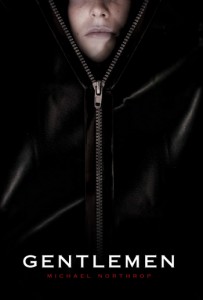 Micheal, Tommy, Mixer, and Bones aren’t just from the wrong side of the tracks–they’re from the wrong side of everything. Except for Mr. Haberman, their remedial English teacher, no one at their high school takes them seriously. Haberman calls them “gentlemen,” but everyone else ignores them–or, in Bones’s case, is dead afraid of them. When one of their close-knit group goes missing, the clues all seem to point in one direction: to Mr. Haberman.

Gritty, fast-paced, and brutally real, this debut takes an unflinching look at what binds friends together–and what can tear them apart.

Why did I read this book: Because of this review.

Trigger warning: the book has a rape scene and I discuss it and its implications here

Gentlemen is a terrifying book. And the horror comes from and works on two levels: the actual story (a thriller) and the meta text. Gentlemen is a terrific book for all that and for the myriad of possible conversations that can grow from reading it.

Its main protagonist and narrator is a teenage boy called Micheal. He is: lazy, homophobic, sexist, self-centred, an outcast at school, who enjoys spending his free time with friends Tommy, Bones, and Mixer drinking, taking drugs, talking dirty;

He is also a guy: who is saddled with a mistakenly misspelled first name as though expectations for his life were low from the get go; whose face has been disfigured by his own father who hit him with a DYI tool when he was a toddler; whose mother sometimes forgets to buy food and who never asks how his day was because what would be the point of that; whose school has all but quit on him by placing him and his friends in remedial classes and labelling them “hard cases”.

Mike, is in other words, a complex, unlikeable yet sympathetic, multilayered character whose point of view is skewed by all of the above and by his almost extreme loyalty to his friends who have stuck to him when others didn’t.

And it is his friendship with Tommy, Bones, and Mixer that move the story forward and is the central storyline of the book. It starts when his friend Tommy disappears after losing it during class and overturning a desk in front of a teacher. At first the disappearance does not affect the characters – he might have been suspended after all plus it is not like Tommy hasn’t done a disappearing act before. But then their remedial English teacher, Mr. Haberman starts behaving oddly when reading and discussing Crime and Punishment in class. The kids, especially Mike, who already intensely dislike Mr. Haberman – partly because he keeps calling them “Gentlemen” as though making fun of them – begin to closely observe the teacher and suspicion and paranoia slowly creeps in and take hold of Mike’s mind and he is certain that the teacher is responsible for Tommy’s disappearance and it all culminates in a very graphic, violent scene in which Bones beats the teacher up in his own living room as Mixer and Mike simply stand by and watch.

Plot wise, the book is an excellent psychological thriller. It builds up the characters fear, anxiety preconceptions and all of that based on what could be constructed as circumstantial evidence at best or projected hate at worst. It develops in parallel to Mike’s reading of Crime and Punishment and his observations of that book and the mystery is extremely well- constructed because there is the uncertainty as to whether Mike and his friends are simply paranoid or are they correct in their assumptions?

But Gentlemen is much more than a thriller and it’s in the meta text and Mike’s narrative itself and in the different ways that the author subtly allows the reader to observe his life. For example, it is there when Mike takes breaks from talking about Tommy to muse about what he has (or hasn’t ) for dinner or the things he did last summer to hook up with girls. Above all is in the way that much more than Tommy, it is another one of Mike’s friends that is truly the central figure here: Bones.

Bones is the one that Mike keeps thinking about and talking about, about their relationship and old friendship which started years ago. About Bones’ increasing violent streak. The climax of the story might be the point where Bones beats the teacher up but its seeds have been sown well before that. In fact, the seeds of Mike’s dissociation from Bones, the seeds of their eventual separation as friends start in a very disturbing scene where Mike observes Bones with a girl in an abandoned house. At first, Mike thinks all is fine and he is all for the voyeuristic experience , until little by little details of the scene start to make sense: how the girl is barely moving or how her hands are holding her pants while Bones is trying to open them. Mike is pretty sure that what he is witnessing is rape: yet he is unable to actually name it; he is unable to even look away (and he even has a hard-on) at first; when he finally does look away, it is in the certainty that he saw something wrong but that he has no business dealing with – mostly because he barely knows the girl and has known Bones for a long time.

My preoccupation with this scene, which is a short scene that doesn’t have any direct consequence plot-wise is manyfold. To me, as I said, it pinpoints the beginning of the end of Bones and Mike’s friendship by also being the start of Mike’s conscience growth. Another point is that there are no repercussions for the rape in the story – it is never directly addressed by any of the characters and there are no consequences for Bones. I went back and forth with this as it is an extremely horrifying scene and yet it is believable that there would be no addressing of it – we are talking about characters in the fringes of society and the girl never came forward. We do know though, that the scene never leaves Mike’s mind even if he doesn’t think about it: he does observe that the girl is not at school the day after; and it is definitely part of a list of crimes that he attributes to Bones in the end.

More than that though, what worried me the most about the scene comes from reading other reviews of the book that mention it. And it astounds me that some of those reviews address it as a “sex scene” . First of all, let me get something off my chest: there is NO sex scene in this book. There is a rape scene. Rape does not equal sex. Period.

The fact that so many readers are unable to differentiate between the two is exactly the point I am trying to make. It reflects a huge failure from our society to effectively address this issue. And it worries and saddens me a lot. It is why within the confines of the book, such a thing is possible, and it is unfortunately realistic and why there are no repercussions, why Mike will choose friendship over action. It is why right now, in real life, a book like Speak by Laurie Halse Anderson is under threat of being banned because some crazy guy thinks it is “soft pornography”.

But this scene is only but one scene in the book that invites discussion. I spent many hours after reading it thinking about the different threads of the story and what do they mean.

For instance: how hard it is to tell the difference between someone who is truly broken (no doubt that Bones is a sociopath) and someone who is only lost (like Mike) and needs nurture and culture? How does the educational system fail so many boys and girls by lowering expectations? Which problems are cultural and therefore perfectly fixable if addressed?

Another important question that I also saw with reference to the book: is this a book for boys? Well, yes, it is. It is also a book for girls. It is book for everybody. I fail to see why there must be a difference. In fact, I believe that this distance, this separation between books for boys and books for girls is indicative of the same type of problem the story itself is an example of (going back to that one rape scene): that boys will be boys and girls will be girls; with division and separation comes insulation and that is never a good thing. Just yesterday I was reading this article in the Guardian by Cordelia Fine on the Gender Lie, it is a very timely article with regards to this review but also because of recent outcries all over the YA blogosphere for more books for boys (oh please, can’t boys identify with girls? WHY the hell NOT?).

But I am digressing now.

(But perhaps not too much.)

In any case, Gentlemen is a book about inaction and ignorance; about choosing who you are friends with, about failure and conscience.

At one point the English teacher says:

a crime extends past the moment it is committed. That a man’s conscience….

He is interrupted before he can continue and it is down to Mike to fill the gap. And he does so and when he realises just why the teacher truly addresses them as “gentlemen” is truly heartbreaking. In the end, there is a way out for Mike but how many boys can say the same?

Gentlemen is a terrifying book. It is SO realistic and believable and that makes it even more horrifying.

So anyway, that’s what we were turning over in our heads, all filtered through standard-issue high school paranoia and our natural belief that everything was basically about us anyway.