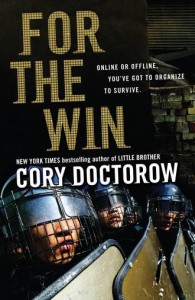 Title: For The Win

In the virtual future, you must organize to survive

At any hour of the day or night, millions of people around the globe are engrossed in multiplayer online games, questing and battling to win virtual “gold,” jewels, and precious artifacts. Meanwhile, others seek to exploit this vast shadow economy, running electronic sweatshops in the world’s poorest countries, where countless “gold farmers,” bound to their work by abusive contracts and physical threats, harvest virtual treasure for their employers to sell to First World gamers who are willing to spend real money to skip straight to higher-level gameplay.

Mala is a brilliant 15-year-old from rural India whose leadership skills in virtual combat have earned her the title of “General Robotwalla.” In Shenzen, heart of China’s industrial boom, Matthew is defying his former bosses to build his own successful gold-farming team. Leonard, who calls himself Wei-Dong, lives in Southern California, but spends his nights fighting virtual battles alongside his buddies in Asia, a world away. All of these young people, and more, will become entangled with the mysterious young woman called Big Sister Nor, who will use her experience, her knowledge of history, and her connections with real-world organizers to build them into a movement that can challenge the status quo.

The ruthless forces arrayed against them are willing to use any means to protect their power—including blackmail, extortion, infiltration, violence, and even murder. To survive, Big Sister’s people must out-think the system. This will lead them to devise a plan to crash the economy of every virtual world at once—a Ponzi scheme combined with a brilliant hack that ends up being the biggest, funnest game of all.

Imbued with the same lively, subversive spirit and thrilling storytelling that made LITTLE BROTHER an international sensation, FOR THE WIN is a prophetic and inspiring call-to-arms for a new generation.

Why did I read this book: I have a love-hate thing with Cory Doctorow. On the one hand, I think he’s brilliant – I love his politics, his biting wit, his stance on DRM (die! DIE!), and I think he’s an altogether incredibly smart (if a little out there) dude. That said…when Cory Doctorow writes fiction, his characters all sound just like…Cory Doctorow. Little Brother was fascinating and highly educational (and what can I say, I agree with Doctorow’s political stance, so I ate the book up) – but from a purely objective, reviewer’s standpoint, I can’t exactly say that he writes Great Fiction. When I heard about For The Win, I was immediately intrigued though. As an Economics grad that enjoys video games and grew up in southeast Asia, this book basically has my name all over it. Of COURSE I eagerly scooped it up.

For the Win is a smart, action-packed novel following some very smart internationally dispersed gamers as they navigate the complicated and lucrative virtual MMORPG world, as well as the economic repercussions these games have in IRL. There’s Wei Dong (real name, Leonard), an American fascinated with China, and a gamer that has worked his way into a Chinese raiding guild. There’s Mala – aka General Robotwala to her army of followers – Indian village girl, but with an uncanny knack for attack strategy, and unbeaten…until she comes across a Singapore gamer that calls herself Big Sister Nor. Nor tries to recruit others like Mala to stand together against The Man (in this case, the corporate entities that own the games) – to unionize and to outsmart the limitations of the system and the ruthless corporations that will stop at nothing to shut these rogue gamers down.

There’s no denying that there is something eminently readable about Cory Doctorow’s writing (fiction or otherwise), and For The Win is no exception. Just as with Little Brother, FTW is an incredibly informative, action-packed romp starring some shockingly intelligent individuals. Yeah, it’s a bit bloated, the characters simplistic in their renderings (cool brave gamers versus the old evil corporate minions), but so far as entertainment value goes? FTW delivers. If Little Brother reminded me of a supercharged and politically revelant version of Hackers, FTW is (as one apt amazon reviewer put it) the literary equivalent of a Michael Bay/Jerry Bruckheimer movie – a whole lot smarter, naturally. FTW has all the subtlety of a sledgehammer (much like the afformentioned Bay and Bruckheimer) – but that doesn’t mean this isn’t a fun book to read.

And, as with any Doctorow work, it’s also a goldmine of information. And on that note I feel obligated to say – Cory Doctorow is the KING of info-dumps. It’s gotten to the point where he doesn’t even attempt to disguise them – periodically throughout the book, Corey Doctorow speaks directly to the readers to explain different things (gamer arbitrage, for example). That’s not a bad thing – I think these points are really interesting, and he does a great job explaining the applications of economic principles without being dry or boringly erudite. But is this the stuff of great writing? Not exactly. And, it’s also an incredibly polarizing style of writing – because should a reader not subscribe to this author’s particular flavor of kool-aid, it’s game over. (lame pun not intended) (seriously, I apologize for all the lame puns of late)

Bottom line: FTW is fun. It’s smart and rousing and wonderfully informative. I liked it a lot…but it’s probably not gonna work for everyone. You decide.

So, anyone familiar with Cory Doctorow beating away at the down with DRM drum knows that he is an advocate for digital FREEDOM. And, in that spirit, EVERYONE is a giveaway winner – because EVERYONE can download For The Win, gratis. Completely free (and I’m not just talking some crappy PDF copy – we’re talking open source, remix it however the hell you want to in whatever format you want to awesomesauce).

BUT for those a little more old-school (or those without e-readers), we’re also having a giveaway of ONE print edition of the book. To enter, simply leave a comment here letting us know what your online game of choice is. The contest is open to EVERYBODY, ANYWHERE, and will run until Saturday 31 July at 11:59pm (PST). Good luck!

Reading Next: Early to Death, Early to Rise by Kim Harrison

Book Review – No Rest for the Wicked