Chat With An Author: An Interview With Peter Straub

On this edition of “Chat With An Author” we bring you the ineffable Peter Straub – horror author, poet, and occasional guest star on soap opera One Life to Live. It’s no secret we’re fans of Mr. Straub’s work (so far, Thea has talked two unsuspecting readers into writing reviews of his work), so when we were presented with the once in a lifetime opportunity to interview this prolific author, we jumped at the opportunity! 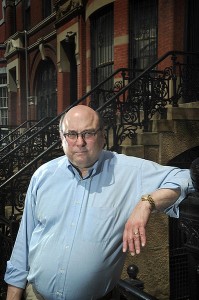 Here to talk about his new novel, A Dark Matter, ladies and gents please give it up for Peter Straub!

The Book Smugglers: First and foremost, thanks for taking the time to “chat” with us! A Dark Matter is your newest horror novel, about a group of teen friends in the 1960s who follow a charismatic college campus guru and unleash a cataclysmic evil that forever changes them. What was the creative impetus behind writing A Dark Matter? What inspired this book?

Peter: The book began when I started to remember some strange, fraudulent but charismatic men who wandered through Madison, WI, in the mid-sixties. They had mysterious, prophetic things to say; they had studied mystic texts and traveled through exotic lands; it was their self-imposed task to impart their wisdom to younger minds. It was their unacknowledged task to live for free at their acolytes’ expense, to stay in their apartments, drink their liquor, appropriate their clothes and their girlfriends, and to take drugs. 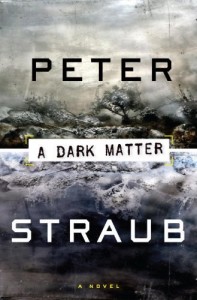 The Book Smugglers: A Dark Matter seems to flow organically from your past work, incorporating elements from your earlier novels and building upon them. In particular, A Dark Matter uses the same varied character perspectives and metafiction-style devices that you’ve used in your Blue Rose Trilogy (Koko, Mystery, The Throat). You’re a writer that doesn’t seem to be afraid to experiment and push the narrative/structural envelope. Do you ever fear that readers (or those gorgon-esque reviewers) may not “get” your writing?

Peter: Some don’t, of course. For two decades anyhow, a certain class of reader has been complaining that my books are too slow, that the payoff isn’t instant, and that too much is going on. Who needs all this stuff, they say, and what good is it in the first place? I can’t worry about these people; they already have plenty of writers who give them exactly what they want. What I want to do is to reach the readers who have not as yet given me a try, and to give the readers I already have, whom I love beyond measure, work that is as good as they deserve it to be.

The Book Smugglers: On that note, the actual structure of A Dark Matter is pretty unconventional – the book unfolds through stories and collected memories. Many early reviews liken A Dark Matter to Akira Kurosawa’s classic mystery film Rashomon, and for good reason. Why did you experiment with this new eccentric structure in this book? Did any other films or books like Rashomon influence A Dark Matter?

Peter: To tell you the truth, I never thought of the Kurosawa film. Nor was it influenced by any other film, actually. It just came to me, after years of wondering where this ship was headed, that it was going to move from one version of the event in October, 1966, to another, maybe three in all, and that these different versions would reflect the characters and ambitions of the people who delivered them. So, it seemed to me though I had never planned to do this, that the book would have three endings, one after the other, with the last being the best, truest, and most comprehensive. It is a very odd structure, I know – in fact the structure is like this: a summarized introduction; an interpolated short story; some left-field speculations about evil; and three endings. This is perfectly nuts, it shouldn’t work; but it seemed to work anyhow. I liked it, I thought it read in a very satisfactory and involving manner.

The Book Smugglers: Your books, A Dark Matter included, explore horror of a psychological and supernatural nature, and also manage to traverse the Never Never Land between “genre” and “literary” fiction – a gap that has claimed many an author in its unfathomable depths. How do your books appeal to both genre fiction fans and the literary types?

Peter: We shall see. It seldom seems to me that I actually have made the wonderful genre crossover that I felt was the actual heart of the particular novel I was writing—or, more accurately, that hardly anyone noticed what I was at least trying to bring off. Reviewers all described my books as works of horror, and that was that.

Peter: Well, in actual life, every single narrator you meet, including you and me, is as unreliable as can be. Everybody shapes and shaves experience while describing it, everybody frames himself or herself in a better, stronger role and in a more flattering light than may truly have been the case. We can’t help doing this, it’s how we are built. So the unreliable narrator is no more than an aspect of psychological realism. It is extremely interesting, however, to come across narrators who do not understand that they are telling very partial or inaccurate “truths,” also narrators who tell deliberate untruths because lying to the reader and the other characters in the best way to get what they want.

My favorites would be the narrator of The Good Soldier, Ford Madox Ford, and The Sacred Fount, Henry James. 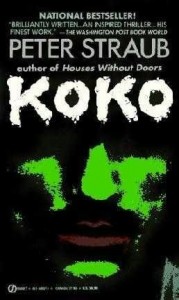 The Book Smugglers: You’re most well known for your work in the horror genre (with five Bram Stoker awards under your belt), but you’re also a poet with several published collections. You’ve also written and edited collections of short stories, won the prestigious World and British Fantasy Awards, and have had a recurring guest role on a soap opera. Basically, you do it all. Do you have a favorite genre or medium to write or create in?

Peter: I’m in love with the novel, and have been since my teens. And because I love genre work but think it need have none of the limitations generally associated with it, it is very gratifying to me that so many younger writers have moved right into the gap you mention above, and without worrying at all about it, mix horror/fantasy and general literature into one wonderful thing: Kelly Link, Michael Chabon, Graham Joyce, Kevin Brockmeier, Dan Chaon, Brian Evenson. They’re great.

The Book Smugglers: Who are some of your favorite and/or most influential authors?

The Book Smugglers: You’ve collaborated with Stephen King in the truly excellent books The Talisman and Black House. [An aside: When you and Stephen King start tossing ideas around, we imagine its something like the proton-pack streams being crossed in Ghostbusters (i.e. unfathomably beautiful and universe-ending dangerous).] How does the two-author collaborative book writing process compare to writing a book on your own?

Peter: With Steve King, the difference is liked being carried along in a big, perfectly-tuned Italian sports car capable of hitting 150 without getting the shakes and humping along on a touchy old motorcycle that slams into every bump and hole and conks out every ten miles or so. That’s the difference, pretty much. I’m the old motorcycle. 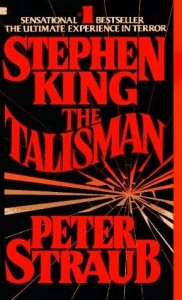 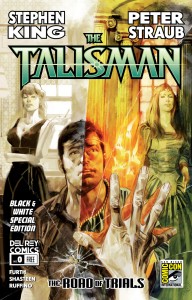 The Book Smugglers: The Talisman has recently been released in comic book format – do you read comics? Did you have a say in the art direction or publication process of the comic book adaptation?

Peter: I read graphic novels, a lot of them, and got into them through Neil Gaiman’s Sandman books. With my dear “One Life to Live“ friend, Michael Easton, I wrote a long, hairy graphic novel called The Green Woman, which was illustrated by John Bolton and will come out from DC/Vertigo later this year. Michael and I are very proud of this book.

With The Talisman comic, Steve and I were consulted at every step in the pricess, and continue to be so.

The Book Smugglers: We hear rumors that a third book in The Talisman arc is in the works – is this true? What other writing projects do you have simmering?

Peter: At some point in the next year or so, Steve King and I will begin pondering the third and last Jack Sawyer story. Nothing else is simmering, except for the vague outlines of a story set in Victorian England and the present day.

Peter: Oh, grump, I hate zombie, but here goes, anyhow: The Ambassadors, Franny and Alexander, and The Wire.

Peter: No, I long ago gave up having to smuggle books into my house, and now they pour in through the doors every day. I just completely gave up guilt for buying books and music.

Peter Straub is the New York Times bestselling author of more than a dozen novels. Two of his most recent, Lost Boy Lost Girl and In the Night Room, are winners of the Bram Stoker Award, as is his recent collection, 5 Stories. Straub was the editor of the two-volume Library of America anthology The American Fantastic Tale. He lives in New York City.

We’d like to extend a huge THANK YOU to Peter Straub for taking the time to “chat” with us! For more information about Peter Straub, make sure to visit his website, www.peterstraub.net. And make sure to stick around as later today we review his newest novel, A Dark Matter.

A Chat With Andri Snær Magnason