In which we talk about all those water cooler moments of the past week’s episodes, raving about the good, ranting about the bad.

Ah. Back to the sort of episode I love to hate. Don once again proves to be a chauvinistic pig by being completely unable to talk to Betty about his work. “You don’t need to worry about it”. Oh, yeah Don she is ONLY your wife, the mother of your children, why would she need to know anything about how you make your living. She is rightfully pissed off and tells him so and he just stomps off and decides to go drink driving and have a party with a couple he gives a lift to. I was so glad when they drugged and robbed him HA TAKE THAT DON DRAPER. Of course, Betty is not a saint, and is totally toying with the idea of cheating on him again. Peggy on the other hand, starts an affair with Duck Philips. Because THAT will end ok, of course. NOT.

Oh yes. And Cooper blackmails Don into finally signing a contract. Oh-la-la! I knew this would come back to haunt Don. Fate is a biatch, yo.

Watching this show I truly do wonder what the NY police department think of the whole thing. It is very wrong of me that I was thoroughly entertained by the cops placing bets on who got to solve their respective cases first? I am sure it is. But I can’t help it: Nathan Fillion is so good as Castle and I love Beckett too. Plus how much do you love the lame one-liners? The case this week was pretty cool as well with a “Strangers in a Train” premise.

YES. I was so relieved to see House is still doing therapy! Good for him and for continuity as well. The premise of this episode was to find something that House could do that would keep him away from the Vicodin addition: he quits his job, moves in with Wilson (OMG the cooking lesson was so much fun!) and…gets bored. OF COURSE, the one thing that will keep him sane is his work at the hospital! I am not generally a fan of Foreman so yeah, yawn for the whole “I am the boss, hear me roar” thing.

OH my beloved baby! You are back with a bang, aren’t you?

Lundy is back to chase a serial killer that has been on the loose for 30 years! If I were Debbie I would so ditch lameo Anton and hook up with…Quinn. He is HAWT dudes. And OH MY GOD, Laguerta and Angel are doing it! Go Batista! I love it.

Meanwhile , Dexter is adapting to fatherhood (hilarious) trying to keep up with work and the serial killing on the side, the question of this episode was: Can Dexter have it all? Oh yes he can. But first he needs to catch up with some much needed sleep before he…oh-oh too late! Dexter totally fraked up a case and got a serial killer on the loose but that is not a problem really, for super Dex is it? Unless of course, something happens and OMG, there is a car accident and Dexter has pieces of Benito Gomez in the trunk! *dies* Freaking cliffhangery ending!

What? Do I need to say anything else about the show? Ok. I love watching this show because of the water cooler moments that ensue at Casa de Ana afterwards. Dear Partner LOVES the premise of the show and I am completely entertained by simply looking at him getting all excited about the micro-expressions thing. This particular episode was about a girl with Split Personality Syndrome. Dear Partner was fascinated with it and asked:

Him: Is this for real? Does that really exist?
Me: oh yes, I recently read a book by Stephen K..
Him: *interrupts* In REAL life?
Me: *mumble mumble* I don’t know.

Him: I had a horrible nightmare. *dejected* You had split personality and one of them was called Joy and was cheating on me with Angel
Me: DUDE, you have the BESTEST dreams ever.
Him: *the look*

I had no huge expectations for this pilot but oh boy how I laughed in the end. I really enjoyed it. It is not necessarily original – I felt that both the narration and the characters were eerily familiar reminding me a lot of the antics and the awkwardness of Malcolm in the Middle. Especially the younger boy who was so so like Dewey! Still he was also my favourite character: his whispered words to himself was so freaking hilarious. Let’s see how it goes, I will tune in next week.

Confession time: I have a crush on Finn. Every time he has his puppy dog eyes, I just about swoon. He is too cute. Although he was not the nicest person in this episode and tried to use Rachel. Same goes for Will, sometimes it is difficult to judge why exactly he is directing the Glee Club but I loved how Emma called him out on that. The musical numbers were outstanding this week (yay, I loved seeing Olive from Pushing Daisies again!) especially Somebody to Love, a song I love! I missed Sue though.

On a more shallow note: I adore Rachel’s outfits.

MOVIE: Children of the Corn 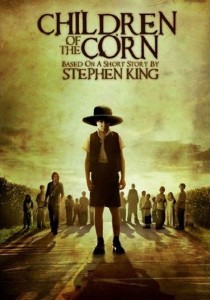 Ok, this was on SyFy last saturday, and being the Stephen King fan that I am (and since I do love the SyFy channel and yes I do watch their movies sometimes don’t judge me) of course I recorded it. I liked the tension between Dualla (sorry, not sure what her real name is and she will always be BSG’s Dualla to me) and her ex-army husband…but it quickly got tiresome. Both characters are such selfish shits, you really can’t care for either of them (though to Dualla’s credit, she plays a mean bitch wonderfully). The camera work was TERRIBLE (gratuitous closeups accompanied by dramatic music), the acting wasn’t much better, and overall production value was pretty low – though better than I was expecting for a SyFy film. Then there were the KIDS. *facepalm* The little booger playing Isaac – he’s Cody from Dexter! – could barely get the lines out of his mouth, and hearing him stumble over the same “He Who Walks Behind the Rows” pagan drivel was painfully embarrassing. And not even slightly creepy. The kid who played Malachi was a bit better, but still awkward and un-scary. And unfortunately, the director of this remake seems to have no sense of how to build tension or fear and the result is uneven, cheesy, and…well, bad. Sigh. Of course it doesn’t hold a candle to the original ’80s film, but it’s not even in the same ballpark. Unfortunately.

AAAAAAAAA!!!!! Dexter is back! DEXTER IS BACK! I have rewatched season 3 no less than four times (GOD I love Miguel Prado), and FINALLY we are back, baby!!!!!! Speaking of babies, how about that little Harrison? He’s adorable, and I love the name. I loved the “sad music” and redo of the intro with Tired!Dexter. I like that Dexter is human, and for all his self control and compartmentalization, he is really running down.

Other OMG Moments: LaGuerta and Angel! EEEE! Jon Lithgow’s butt! EWWW! (Twice) The return of Lundy! And of course, that dramatic ending. Holy crap, where are the rest of Benny Gomez’s pieces!? 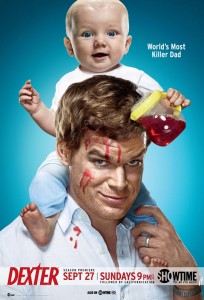 How much do I love you, Dexter? I am so glad you are back again. Although, I’m nervous this will turn into a season 2 repeat, where I’ll be frantic and near heart-attack status every episode.

Aww, poor Drama with his emotional heart attacks! And I’m excited to see if Lloyd and Ari will make amends. I loved the one moment when Ari is about to yell “Lloyd!” but cuts off. Aww.

I have to agree with Ana that I’m not a huge Foreman fan. I’m even LESS of a Thirteen fan (seriously, what the fuck with the bisexuality thing already *eyes roll out of head* Can we be any less obvious with the attempt at ratings grubbing?!). But I liked this episode – I LOVED the moment at the end when House confesses he “slipped” (hehehehehehehe). Can we please have him back in the hospital now? PLEASE? Oh and I also agree with Ana re: the awesome cooking class scene, and how cool he and his therapist are together. And Cuddy is pretty. That is all.

The betting on who cracks their murder faster thing is a bit of a conflicting interest for police departments (especially when it could lead to sabotaging the other side’s case), but Castle pulls it off wonderfully. I love this fluffy, silly, hilarious fun show. And I’m hoping that Beckett looks into her mother’s death with Castle’s help! It seems we might be headed in that direction. Oh, and Castle’s daughter? She’s so cute.

Yes, I watch this show. It’s really the most entertaining, ridiculous piece of reality TV. All of these chefs (with the exception of Dave, the guy with the broken arm) are AWFUL. Seriously, how hard can it be to make a risotto week in and week out? I watch Top Chef for the good stuff, but Hell’s Kitchen is just hilarious. And this week, that annoying chick Suzanne FINALLY got sent home. Now if we could only get Tennille (who looks and sounds like the illegitimate lovechild of Whoopi Goldberg and Chris Tucker) off.

Yes, I watch this show too. It’s terrifying. These little girls in their scary spray tans and mummified hairsprayed locks creep me out. But it’s really the mommies that terrify – in this episode, it was McKenzie’s mom with her wide-eyed soulsucking stare. (And on another note, who names their kid KRAGEN? Like the autoparts store? Sweet name.)

I think this is the first week where I’ve been kind of…meh, to Glee. Don’t get me wrong, I love Kristin Chenoweth and the girl can BLOW, but Rachel’s starting to get on my nerves. I’m glad she’s back in Glee Club, but come on, was there really any doubt before? Next week looks better, with the return of Sue. Oh, and I did like the version of Somebody To Love the kids sang, but the choreography with Finn and Rachel doing the arm out into the distance thing is getting old. New. Moves. Please.

Hilarious. As usual, The Office delivers. I LOVE that Jim is taken down a few notches and that he and Michael are friends – love that scene with the World’s Best Boss mugs!!! Awwwwww! Is it just me or is Oscar getting an uppity, sarcastic edge? And can it hurry up and be next week already for THE WEDDING!?? EEEE!

Goddammit, Frank! Goddamnit! Love the over-the-top product placement for Dave & Busters and Coors in this episode, and the gang’s take on how the government and a “self-sustaining economy” works. Knives, vacuums, and crab sales. Sounds lucrative to me. LOL.