Disclaimer: Halloween is totally a Thea thing when she hijacks the blog and makes me watch and read all sorts of stuff that are way outside my comfort zone (I am SO NOT a horror/Halloween fan). Last year, it was The Evil Dead movies, which, wouldn’t you know, I ended up loving. This year, I was given another list of movies that I had to watch, one for ach day of the week. Ana’s Halloween Marathon is now an official part of our annual Halloween celebration. Let the torture fun begins! Also: there will be spoilers!

Why These movies: Thea is a major zombie fan and has managed to infect me with a certain enthusiasm for the critters. During our Zombie Appreciation Week earlier this year, I watched zombie movies: Night of the Living Dead, Dawn of the Dead and Night of the Living Dead – the Remake and I loved them. Especially the first one. Now, for our Halloween Week II, we decided I should watch 2 more zombie movies…

The viewing Party: This time I am psychologically prepared for the Zombie marathon. I also have zero comestibles (I learnt the hard way not to eat whilst watching zombie movies. Don’t ask) but I do have some beer. I start in chronological order, with Romero’s Land of the Dead. 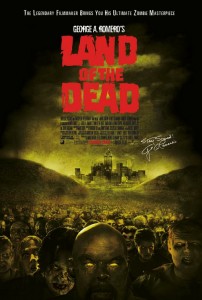 It has been a while since the zombie-apocalypse , the world is infested with them and humans seem to have settled in the new world order. At least they seem better equipped to fight back. There are teams that use fireworks to distract the zombies whilst they go around scavenging for supplies. One leader is Riley (It’s Simon Baker, The Mentalist! Oh hello baby!) and he seems to have a beef with another team leader, Cholo (John Leguizamo). Devastation is everywhere – towns are empty of humans, taken over by zombies. Oh.

Oh. OOOOOOOOOOOOH. These zombies. They are different. They seem to TRY, purposely TRY to be human? Are they trying to communicate? Wait a minute. There is this big black zombie person….he finds a gun and he picks it up! Oh this does not bode well.

Meanwhile, the American Dream lives on in Fiddler’s Green where the rich and powerful have found heaven on earth whilst the rest of the populace lives on quite poorly. I am not quite sure where this is (I googled. It is Pittsburgh) but the city is well protected – bordered by a river on three of its side and by a fence that keeps away the zombies. The camera goes around and we see that humans are using the zombies for fun: there is some sort of amusement park where they can shoot the zombies, or they have zombie cage fights. In one of these cage fights, Simon Baker’s Love Interest is trapped with two zombies and he saves her. But Oh, the humanity. The poor , poor zombies. THEY ARE PEOPLE TOO.

Oh-oh. Big Daddy zombie , he is intelligent. He is like a leader and he is taking the zombies towards the city! I swear it is like watching The Evolution of the Zombie, live. They use tools now , you know?
Meanwhile Simon Baker is out to get John Leguizamo who has gone rogue. By the way, just how old is John Leguizamo? 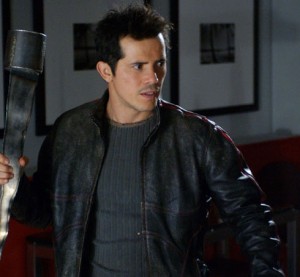 I have been watching movies with the dude for aaaaaaaaaaaaaages and he looks exactly the same! *googles* He was like 40 when he did this movie. Doesn’t look like it. Anyways, I digress.
There is a horrible sense of desolation in this movie when Simon Baker and his Love Interest go outside the city to find Cholo who decides to run and DOOM! He is bitten! I am not sure what to think as he is not the bestest of people ever but he is also not That Bad.

And then, what an amazing scene: the zombies are crossing the river! 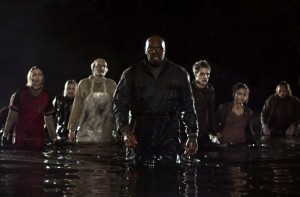 And they invade the city and it is Fiesta de Human Beings. Later Zombie!Cholo! has a face –off with Corporate dude who created Fiddler’s Green and who was trying to flee as the city is overtaken by zombies.
It ends with the zombies leaving……and Simon Baker not killing them and saying: “they are looking for a place to go…same as us. ”

Verdict: Well this movie is quite interesting. Once more I am faced with the fact that I actually don’t fear the zombies as much as I fear the freaking, stupid human beings who are capable of despicable acts. I liked the evolution of the zombie – maybe something between human and something else new? I wonder where else could this be leading to. I didn’t think this one was a gruesome as it could have been which I think I am grateful for. Kudos, Mr Romero. 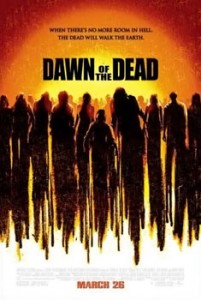 Dawn of the Dead is a remake. Of .. Dawn of the Dead. The one where a group of humans barricade themselves inside a shipping mall after the zombie apocalypse starts.It was my least favorite of the previous marathon, but one I still liked. It was the lightest of them all, I think, with a lot of humorous parts. The remake is by Zach Snyder, the guy behind 300 and Watchmen. And I can tell straight away. The opening credits are awesome and remind me a lot of that of Watchmen.

But I am ahead of myself because the opening credits are like ten minutes into the movie, ten minutes that were positively brilliant yet….WRONG, in so many levels.

It begins with a nurse Ana, going back home at the end of her shift, going to bed with her husband, only to wake up to find a zombie girl inside her room. The zombie kills the husband , who immediately becomes a zombie and pursues her. Like….he runs. Really , really fast.

I pause. Wait a minute. These zombies are different! Even more different than the ones from Land of the Dead. They are stronger and faster! Noooooooooooooooo nonononononono. NO. This is wrong. I email Thea to rant. Because wouldn’t you know…it turns out, I am not only a new zombie lover, I also seem to a zombie purist. Zombies are slow, Zach Snyder, SLOW. I am quite incensed by these wanna-be zombies. I am also, quite terrified because, there is no way, NO WAY, we (as in human beings, we) can survive a zombie apocalypse with THESE zombies. NO WAY. 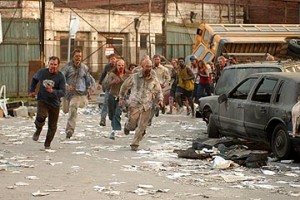 Anyways, I resume watching. Ana, who by the way, doesn’t seem t be grieving her recently deceased husband, runs away and joins a group of people who decide to hide in the mall. Inside there are three security guards who run the show and give them refuge.

There are QUITE a few people here. Including a petty criminal and his VERY pregnant wife and a guy who lives in another building across the parking lot. Then, MORE people arrive in a truck and all of a sudden, there are more characters than I can count or care about. Just to prove my point this one guy is infected and they have to kill him and do I care? NO. There was not enough time for me to care. Instead of the small group of characters like in the previous movies, where we get to learn about them as they live through months inside the mall. Me no likey. Plus hello Ana and this other dude, whom I really like by the way, start to develop a romance….but didn’t her husband just die????

There is this one scene where they are in the roof and there are loads, shit loads of zombies coming to the mall and they are all like, why? Why are they coming here? One of the characters say: “Memory , instinct, coming for us”. Nothing else. He doesn’t say the most important thing! Memory and instinct of WHAT. And with this just like that, they completely fuck this up because this scene should have had social criticism! NO. I don’t like the mindless, zombie for entertainment movie. I don’t like gore and blood for gore and blood. I want something else.

Then, the pregnant lady goes into labour and she has been bitten but her husband has gone mucho loco and keeps her alive and the baby is born and it is a Zombie!Baby! ewww gross! Scary! Wrong! The guy is a total psycho yo! He and the baby are killed, praise the lord. And the others decide to leave the mall and go to a marina and take a boat and honestly? Blah. I lost interest! I mean, the ending has some thrilling sequences with the Super!Fast!Zombies! Then some sacrifices are made and the remaining dudes including Ana (I like Ana, she is kick ass, maybe it’s the name?) … 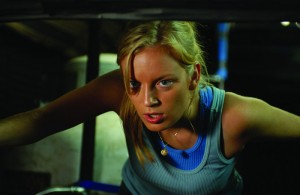 ….sail away only to find themselves in a zombie-infested island with no chance of survival. How could they really? The End. Really.

Verdict: No, I am not a fan of this one. I mean, I am sure there is fun to be had somewhere, the opening was cool, the ending too but it lacked something else. Maybe the humor of the original, definitely the Something More that Romero infused his zombie movies with. Not once did I want to kill the humans because they were stupid, mostly because they were boring. I also admit that these zombies scared the shit out of me. *shudders*

What about you? What do you think of Zombies? Do you like The Traditional Zombie or the New!Fast!Improved ones?