Title: Prophecy of the Sisters 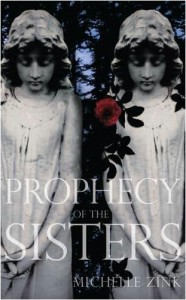 Why did we read the book: We loved the cover and the blurb! Two sisters bent on life or death locked in some kind of ancient battle of biblical proportions – how could we refuse?

One good…
One evil…
Who will prevail?

Twin sisters Lia and Alice Milthorpe have just become orphans. They have also become enemies. As they discover their roles in a prophecy that has turned generations of sisters against each other, the girls find themselves entangled in a mystery that involves a tattoo-like mark, their parents’ deaths, a boy, a book, and a lifetime of secrets.

Lia and Alice don’t know whom they can trust.

They just know they can’t trust each other.

Ana: The opening of the book is set at a cemetery, where the three Milthorpe children, Lia, Alice and Henry are burying their last remaining parent, their father. This beginning sets the dark tone of the entire book and the setting, the descriptions, the narrative are hauntingly atmospheric and evocative and I was definitely hooked and completely freaked out. For the first half of the book, Prophecy of the Sisters totally had me….but later on, when the details of the mystery are revealed, it lost me.

Thea: Like Ana says, the beginning of a book is so very important. The opening line grabs a reader’s attention, and the opening chapter sets the mood, tone and expectations for the novel. Initially, gathered around their father’s grave at a dreary, rainy funeral. The mood is very somber, very cold and morbid in atmosphere. I listen to the main character, Lia’s thoughts. And then…holy monkeywrench, batman!

1890?! From the cover, the blurb, even the opening of the chapter, I was under the impression that this was a contemporary novel. 1890 completely threw me…and even after processing this information, this twist seemed to keep coming back to bite me. Not because I couldn’t get my mind around the year, but rather because the characters never felt genuine to the time period. The dialogue and character reactions in particular sat as rather incongruous with turn of the century America.

This is indicative of how I feel about Prophecy of the Sisters – there are some wonderful images and the premise is awesome…but it never quite works.

Ana: Lia is the narrator (warning: the story is narrated in first person, present tense. I don’t mind that, but I know some readers do) and the story stars with her shock at the loss of her father and the increasing feeling that there is something very strange happening to her and her twin sister, Alice. On the night her father dies, a strange mark appears in her wrist; her sister starts to behave suspiciously and her boyfriend James, finds a mysterious book with only one page left, in her father’s library.

The story starts to unfold and the truth surrounding their family’s fate – especially the fate of the twin sisters – is revealed. The Prophecy of the Sisters: twins sisters, generation after generation have a role to play in the protection or destruction of the world. One sister is a Gate, the other a Guardian to an alternate dimension where demons live in wait to cross over to our world. They are set against each other as one tries to thwart the other but then there is The Twist.

And the twist sort of makes the book because it adds another layer of angst and self-doubt for Lia’s character that is really interesting.

Unfortunately, in my opinion, the author went a little too far with a second twist about Lia’s character that was just too much. And then things start to go awry when light is shed on the majority of the details of the Prophecy. I almost wished I was kept guessing and ignorant because the investigating part and the discovering of the clues about the prophecy as Lia went along where really the best part of the plot. The answers themselves…not to so much. Instead of being creeped out, scared or amazed , all I could think of was:

Why? Why all this… drama? To my mind, the whole thing was a problem with a very easy solution: don’t have children. Simple as that – the whole horror behind the prophecy is this suffocating feeling that no matter what you do, your role is set for you.

Generation after generation of twin sisters whose lives ended tragically could have been easily avoided by the sisters NOT having children. Sort of like: “stop the womb, save the world”. Because no sisters, no gate, ergo no problem. Demons locked outside forever. Having said that, and to be fair, parts of the prophecy are still a mystery, it may well be that in the sequel, Lia will find out a proviso that says that there is nothing they can do to prevent procreation; but I would have preferred to learn about this in book 1, as the lack of a believable explanation as to why this prophecy keep going on and on and on prevented me from being invested in it. Which is a shame, because the premise had so much potential.

Thea: I have to echo many of Ana’s sentiments. The most glaring problem with the plot (besides the completely batty character reactions – more on that later) is that the sisters in the family NEED NOT HAVE CHILDREN! I kept waiting for Ms. Zink to at least address this peripherally in the novel, throwing out a line like “When Lia’s great-great-great Grandmother Miranda abstained from relationships with men, she was impregnated against her will,” or something. Anything. Because really – it is a simple solution to a very immense problem.

That said, I did think the premise of the novel was wonderful. Twin sisters, generation after generation, locked in an eternal struggle between Heaven and Hell…it’s scintillating stuff. The prophecy itself is fantastic and very ambiguous – I love that not all of it makes sense yet, and that there is material for the next book. Also, I loved the ‘twist’ to the story – it definitely takes a mediocre premise to a brilliant one.

The only other significant gripes I had with Prophecy of the Sister laid with some of the writing choices. As I’ve mentioned before, I didn’t quite buy the dialogue or descriptions – it never quite felt like 1890; rather, it felt like a contemporary author trying to write 1890. Also, I really am not a fan of first person present tense narration. Sometimes, it can be beautiful, seamless, and works with the story: for example, Sarah Cross’s Dull Boy and Carrie Ryan’s The Forest of Hands and Teeth use this narrative technique and I didn’t bat an eyelash. However, in Prophecy…it never felt right. The narrative voice in combination with the not-quite-right period made for a jarring read.

Ana: Apart from Lia and Alice (my favourite character by far, I love The Evil One), I didn’t care much for any of the others. James was a nice enough character (and boyfriend, it’s a shame that Lia thought she couldn’t count with his help) and so was Henry, the younger brother. But because of the first person narrative, it was hard to connect with any of them except Lia.

Even harder because at one point, also towards the end, it became clear that there was something off with the characters and I honestly kept asking myself : who behaves like that? Events unfolded and the reactions were all….weird. There is a major, crucial, HORRIBLE event close to the end that had me gasping and yet not a single character seemed to care enough. “SHOW some sort of reaction, people”, I wanted to scream! It was almost like being transported to Bizarro world. A lot of it did not make any sense to me: Lia’s choices (especially regarding James) and their aunt’s inability to act in any way.

Thea: What Ana said. What the heck was up with the character reactions!??!! Even before that pivotal scene near the end, these characters were empty vessels, never reacting in anything resembling a logical, human manner. I was tearing my hair out by those last few chapters – something major happens and no one does a thing except accept that it’s what happened. COME ON PEOPLE! I’m not even delving into Lia’s withholding information from James (which is incredibly annoying – it puts me in the mind of those idiot heroines in bad horror movies that hear a strange noise in a deserted corridor and go investigating).

But, that said, I did enjoy both Lia and Alice’s characters. I do wish that Alice wasn’t so blindly eeeeeevil (though she is also my favorite of the two sisters because of her evilness), or that we had seen a bit more of a connection between the sisters before the two of them are locked in mortal combat for the fate of the world…but I felt a connection with both sisters. As for the secondary characters, they were decently done as well (with the exception of Lia’s aunt, whose withholding of the prophecy for so long is pretty stupid upon reflection). James in particular is an enticing character. However, again, the problem with the characters lies with their strange, unrealistic behaviors and reactions. I can only hope this is addressed and improved on in the next book.

Ana: I really liked the first part of the novel, when Lia and us, the readers, were still wondering about the Prophecy. It was all very mysterious, and the writing was wonderfully atmospheric and gothic and at parts I felt like I was suffocating. Especially every time Alice showed up – I am not ashamed to say that that girl scared me. But as the story progressed, the characters behaved so bizarrely and the story took turns I did not care for and then I lost interest and it ended up being an ok read. I still want to see what happens next though.

Thea: Prophecy of the Sisters didn’t wow me, but I found it to be an all right read. I liked the solid premise, the few good creepy moments and I loved the unresolved nature of the Prophecy. I agree with Ana that the story started strong, but the problems of unrealistic time period and erratic character reactions compounded detracted from the story. I still am interested enough to read the next book in the series, despite these misgivings.

Ana: I loved how VISUAL this book is. Right at the start there is a wonderful scene where Lia walks down a corridor towards a room at the back of the house. I was sweating , my heart was beating like crazy, the suspense almost killed me. This is definitely one of the strengths of the writing and part of me even thinks that the story would work really well in either a graphic novel format or even a movie.

Thea: I liked the use of astral projection in this novel, and the few seance scenes. These were pretty popular, especially around the turn of the century, and Ms. Zink handles these scenes wonderfully.

Reading Next: Rampant by Diana Peterfreund