Kristen is another wonderful blogger we have met this year, and we cannot help but marvel at her consistent, in-depth and clear-headed reviews. Fantasy Cafe mainly reviews–you guessed it–Fantasy, but recently she’s been getting into some Linnea Sinclair and does provide reviews of other genres as well. Besides writing top notch reviews, Kristen is a very friendly blogger, and she makes sure to answer questions and address anyone who comments. Plus, she’s just cool.

Give it up for Kristen!

First of all, I would like to thank Ana and Thea for inviting me to join the Smugglivus celebration. The Book Smugglers is one of my favorite blogs and I very much enjoy their in-depth, honest and, at times, humorous reviews. The many Countdown to Smugglivus features were fantastic and I’m excited to be a part of the fun!

Once again, it is the end of the year – the time for speculating on your favorite books read in 2008, what you can’t wait for in 2009, and what book goals you want to set for the year. I suppose some would say it’s a time for making New Year’s resolutions about losing weight and eating healthier, but those of us who are book obsessed know what’s really important. Forget about exercising more, next year resolve to read more!

The following is a list of my top 10 favorite books I’ve read this year (regardless of year of publication since only about 20% of the 53 I’ve read so far were published this past year). To add some variety, I made a rule that I’m limiting one book per series to a list – otherwise, there would be a lot of repeat occurrences since I discovered some great new series this year. I am also going to forget about whether or not my head thought the book was worthy of a higher rating and go entirely with how much the book stuck with me and affected me personally. So without further ado, here are my top picks of 2008.

The Virtu (#2 The Doctrine of Labyrinth) by Sarah Monette 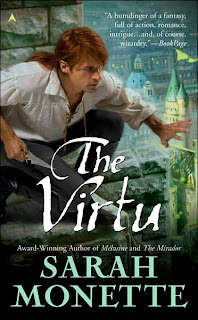 The entire The Doctrine of Labyrinth series is my absolute favorite new book discovery of the year and The Virtu had the tightest plot and most interesting developments of the three. It’s dark, populated with two very different yet in some ways very similar characters with huge flaws and emotional issues – the wizard Felix Harrowgate and the assassin Mildmay. Both men were so well drawn that I couldn’t read enough about them. Monette is one of those authors who asks herself what the worst possible thing she can do to her characters is and then does it, so her books are far from cheery and light. They are gripping, intense and include some of the best characterization I’ve ever read. You can tell the author poured her heart and soul into those two characters, and considering Monette is a new novelist, I expect great things to come from her. 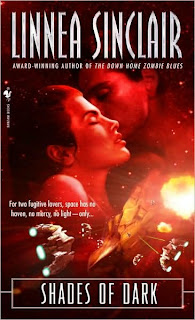 Gabriel’s Ghost, the first book in this science fiction romance series was my first book by Linnea Sinclair. I suppose you could say I liked it since the day I finished it, I almost immediately went to the bookstore to buy the next one – and was halfway through it by the time I went to bed that night. With its darker tone, the newer book was my favorite of the two but both had an engaging storyline and characters I really cared about. They were both almost impossible to put down. It was days before I stopped thinking about these two books all the time and I have yet to get over the way Shades of Dark ended.

The Book of Joby by Mark Ferrari 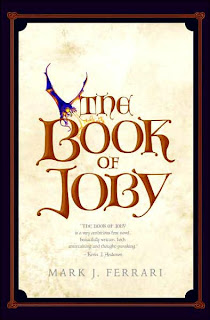 Mark Ferrari’s impressive debut novel read like the author was an experienced writer. The Book of Joby is a modern retelling of the Book of Job from the Bible incorporated with the story of King Arthur. God and Lucifer meet over lattes in a New England coffee shop only to have the Devil challenge God to what the Creator refers to as “that same stupid bet.” The fate of the entire world depends on Joby, chosen as God’s candidate – if Joby fails, the entire world will be destroyed and redesigned according to Lucifer’s instructions. This story of one man’s struggle against great odds drew me in immediately and contained a great mixture of happy moments, tragedy, and humor.

The Player of Games (A Culture Novel) by Iain M. Banks 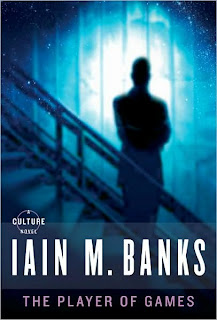 The Player of Games is intelligent space opera featuring a master of strategy games as the main character instead of an action/adventure hero. This was my introduction to the Culture and I found the idealistic future presented fascinating. Yet as wonderful as it appeared, Banks managed to paint a darker picture of it while making it still seem like a pretty good world to live in, especially in comparison to the glamorous Empire of Azad, in which racism, sexism, and cruelty run rampant. The Player of Games is a multi-layered story containing depth – yet it is highly entertaining and not at all dry.

The Graveyard Book by Neil Gaiman 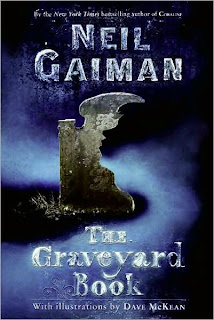 This is without a doubt my favorite novel by Gaiman (none of his books are as awesome as his Sandman comics, though). His fantasy retelling of The Jungle Book details the adventures of a boy raised by the inhabitants of the local cemetery after the murder of his family. At once chilling and charming, touching and humorous, this was one absorbing creative tale I didn’t want to put down. 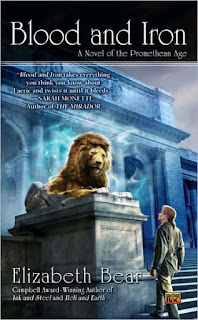 All four books in this urban fantasy series are excellent, including the two books in The Stratford Man duology released this summer. While the more recent books are stronger, the first one remains my favorite because I loved the characters Elayne and Whiskey so much. Intertwined with many mythologies from the British Isles (King Arthur, Tam Lin, Puck, and Morgan La Fey are all present), Bear’s Faerie is not out of a Disney cartoon but is rather grim with complex gray characters who have to make some difficult choices. 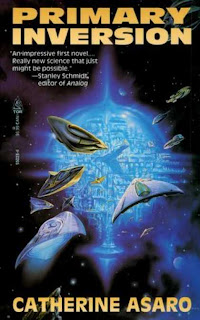 The first book published in this romantic space opera series (containing some hard science fiction) holds a special place in my heart because it’s the first book that really convinced me that maybe I do like science fiction after all. The Skolian empaths/telepaths are in conflict with the Eubians, a race that derives pleasure from harming others – especially empaths. This one had it all – a great female character, intriguing societies, political intrigue, forbidden romance, and a pretty cool space battle! 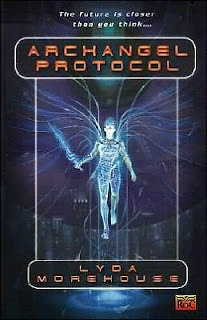 Archangel Protocol takes place in a not-too-distant future in which America no longer has separation between politics and religion. This fast-paced, difficult to put down novel contains some great ideas about society, a fun mystery, and some romance. I’ve decided to call it a cyberpunk mystery romance socio-religious/political adventure. It’s the only cyberpunk I’ve ever actually found enjoyable but sadly it is out of print.

A Companion to Wolves by Sarah Monette and Elizabeth Bear 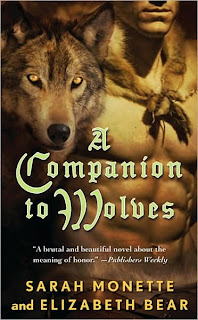 A serious parody of animal companion tales based on Norse mythology about a band of men who bond with wolves to protect the people from trolls. In spite of their knowledge of battle, these defenders of the realm are seen as unmanly by many due to their homosexual practices. When a leader’s son is chosen by a wolf, he must contend with his father’s disdain if he wants to join the society as the wolf’s companion. This novel incorporates Bear’s handling of myth with both Bear and Monette’s ability to write deeply troubled characters – of course it’s one of my favorites of the year! 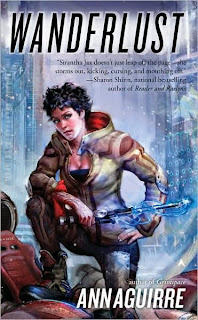 Grimspace (the first book in this romantic space opera series) was difficult to put down, but this one was far better and impossible to put down. Fun, fast-paced, and a bit over the top, this one had me hooked from start to finish (it’s the only book I read this year that I finished in one day). Aguirre found an excellent balance between action and keeping the plot moving while exploring character relationships. 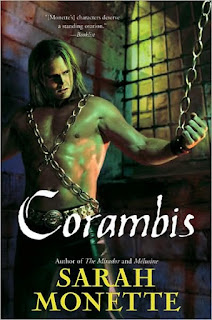 Corambis by Sarah Monette
The fourth and final book in The Doctrine of Labyrinth series will be out in April 2009. While I’ll be sad to see it end, I can’t wait to revisit my favorite characters and find out what happens to them. This is one of those books I will have to have as soon as it is out, even if it means walking to the bookstore in a blizzard (I live in Maine – blizzards in April are a very real possibility). 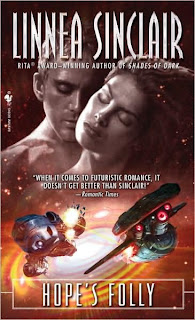 Hope’s Folly by Linnea Sinclair
The third book in the Dock 5 Universe is about Philip Guthrie, a character appearing in the first two books, and is scheduled for release in February 2009. Although I will miss Chaz and Sully, who are now some of my favorite characters of all time, this is another book that I’d go out in a blizzard for. 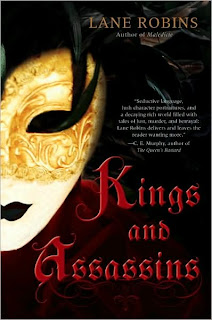 Kings and Assassins by Lane Robins
Even though it did not make it onto my top 10 list, I was very impressed with Robins’s debut novel Maledicte, a dark fantasy novel about a young woman possessed by the goddess of love and vengeance. Robins drew me in with lush prose and gray characters. This book is actually about Janus, who seemed more evil than gray but reading about evil characters can be fun. While I wouldn’t go out in a blizzard for this one, I will get it fairly soon after its release (also in April 2009).

Other books I’m looking forward to in 2009:
Blue Diablo (Corine Solomon #1) by Ann Aguirre
Doubleblind (Jax #3) by Ann Aguirre
By the Mountain Bound (#2 The Edda of Burdens) by Elizabeth Bear
Republic of Thieves (#3 Gentleman Bastards) by Scott Lynch – I’m hoping this will be out next year anyway!
A Dance with Dragons (#5 A Song of Ice and Fire) by George R. R. Martin – This is probably wishful thinking on my part since I’ve been hoping for it the last few years.

Wow, that ended up being a lot longer than I’d anticipated! If there’s one thing I can talk about at length, it’s books.

Thank you again to Thea and Ana for the invitation to celebrate Smugglivus. I hope this list helps someone find some new books to enjoy!

Next on Smugglivus Presents: Graeme of Graeme’s Fantasy Debut