Who: Kate, the incredibly intelligent and wonderful woman that runs the review blog What Kate’s Reading.

Kate runs a fantastic blog, reviewing historical fiction, academic works, non-fiction, romance, and home of the infamous ‘Unbuttoned Yet Tucked In’ series (in which Kate argues that not all romance novels with horrible covers are horrible books–a sentiment we can all relate to!). Kate also writes some very sharp, insightful reviews–this year she has started providing reviews for Lit Mob (this is in addition to running her own blog, and writing other professional and academic reviews)! 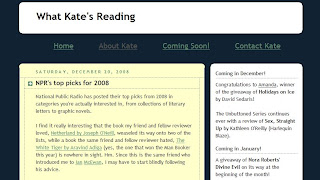 Without further ado, we give you Kate!

Ana and Thea, why do I always seem to be writing in airports for you? For your reference, this was mostly written during a layover at Minneapolis/St. Paul. Thanks for having me in your extraordinary Smugglivus month! 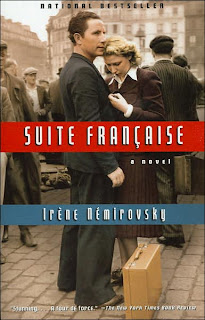 In 2007 a monumental piece of literature was published for the first time even though it had been penned nearly half a century prior: Irene Nemirovsky’s Suite Francaise. Mark my words, this will not just be a notable book of 2008 but is destined to become a canon of mid-20th century literature both for the work itself and the time and place that made the work possible. Nemirovsky, a converted Jew living in France with her husband and children, penned Suite Francaise in the early 1940s before she herself was arrested, imprisoned, and killed in a Nazi camp. The papers that would become Suite Francaise – incomplete papers, as Nemirovsky had only time to finish two of the intended five parts – were hidden with the author’s children as they dodged the Nazis throughout the war, and were only discovered at the end of the century; the two Nemirovsky daughters had always assumed the hidden, handwritten books were their mother’s journal and had not read them in deference to their painful past. But when they discovered those books were their mother’s unfinished masterpiece, it was translated and published, incomplete and still in its draft form, as Suite Francaise.

The two completed parts of Suite Francaise tell a multi-layered story of France during the Nazi invasion and occupation. The first section, “A Storm In June,” follows multiple Parisians on their exodus from the city, a horrific time in which the glories and ugly, ugly pitfalls of mankind are all too evident in many of the class-conscious and selfish characters. The second story, “Dolce,” tells the story of one small French town as it deals with the occupation of German soldiers, an uncomfortable time of painful compromise and tiny rebellions, and learning that the enemy can be shockingly evil, unnervingly kind, and inherently human. Throughout these stories Nemirovsky instills her characters with a quiet desperation and humanity that fill the pages with a certain anxiety, a sort of tacit finality: we know how the War ended, and we know how Nemirovsky met her end. But despite the reader’s knowing of certain outcomes, the narratives rise above our preface-reading oracles. Regardless of circumstance, history, personality, or outcome, Suite Francaise as a piece of literature matches the importance and greatness of Suite Francaise as a historical narrative, one author’s sterling critique of the time and place that would eventually kill her.

I’ve been thinking a lot recently about the context of art in all fields – particularly literature, music, and visual arts – and its meaning, use, and importance in a person’s interpretation. In the case of Suite Francaise I’ve read a reader’s pondering – which I unfortunately cannot find to cite, sorry – in which the person wondered if the book would have been so popular and such a critics’ darling if it weren’t for the back story of the author, a history very thoughtfully provided in the publication through the author’s letters and notes. This too gave me pause, and after long consideration I do believe that in the case of Suite Francaise the context of the writing provides it with a greater history, sense of place, and pedagogical potential, but without that context the book would stand on its on as a great work of fiction. But how important is context to art, overall? Does knowledge of the context of creation enhance our understanding of it – or prejudice our viewing?

I tend to think that context should remain where the context is intended, such as with Suite Francaise, and to stretch this theory out to the visual arts, I find it very easy to view Suite Francaise as the literary equivalent to Picasso’s seminal stunning and forceful Guernica. Painted in direct response to the brutal bombing of a small Spanish village by Nazis during World War Two, Picasso hashed severed limbs in oil on his canvas, disembodied heads, destroyed animals and lives in a painting that is as much silent scream of anguish as political protest. It is a direct response to a worldly action – there are few other in the arts that are so transparent – , and no one would dream of entirely separating the meaning of the piece from its worldly subject matter. Why then should we even consider doing so with a piece of literature that is so specifically a response to a very particular time and place? In such a circumstance the context is a vital part of its creation.

In terms of the spectator, the appreciator – the consumer, if you will, Marcel Duchamp may have said it best: “…the creative act is not performed by the artist alone; the spectator brings the work in contact with the external world by deciphering and interpreting its inner qualifications and thus adds his contribution to the creative act.” Because of this, bringing the context – the baggage, if you will – to the interpretive table can sometimes be detrimental. Personally, I am not a fan of Jackson Pollock, and much of me believes that my opinion is because of his relationship with Lee Krasner as opposed to any artistic qualities of his art. Sad, but true. Because of the context of his creativity, because of my own knowledge of his life, I bring interpretational baggage to my viewing of his art, and my personal distaste for him overrides any artistic sensibility that I may have. To be fair I am not much of a visual person, but I can’t think of a literary equivalent to my distaste for Pollock. (I do abhor Hemingway, but I’m pleased to report it’s because I find his work both boring and masochistic – nothing to do with Hemingway the Man.)

There does eventually come a point, though, when context and appreciation may overlap too much, when one mistakes appreciation for the context for appreciation of the art. One does not have to like Beethoven’s Ninth to appreciate it for the fact that it was written when the great composer was nearly fully deaf – which is to say, one appreciates the context though not the content. One can appreciate how a Morris Louis and a Helen Frankenthaler may look hung across the room from each other without liking the pieces themselves; one can buy into the Hemingway mystique to try to buy into his fiction. To me, this poses a personal question: if one needs the context to appreciate the art, is it worth that person appreciating it at all?
Fortunately I don’t believe that’s a question that needs to be asked of Suite Francaise. Without its context – should the book have been written by a thirty-year-old man in 1999 – the words stand for themselves. But within the metadata of the fiction, if you will, lies that other narrative, separate and just as important as the words on the paper. There is no use and no point in separating Nemirovsky’s tragedy from the book. To do so is folly, and to do so is to lose the calamity imbued within its words.

My thanks to Jeff Phegley, Todd Flatt, Steve Short, Rachel Denny, and Evan Tewinkel for some great discussions which helped me refine my opinion.

In other news of Irene Nemirovsky, the Museum of Jewish Heritage – A Living Memorial to the Holocaust in New York City is holding what looks to be a fascinating exhibition called “Woman of Letters: Irene Nemirovsky and Suite Francaise” through March 22, 2009, which includes the original manuscript of Suite Francaise, the valise in which it was found, personal papers, photographs, and other ephemera of the author, her family, and her story. The museum has several public events and lectures surrounding the exhibition, and public tours can be booked with contact information on their website. Are you, like me, too far from that neck of the woods to view the exhibition live? Their website does a great job of presenting the content of the exhibition (and making you wish you could afford that red-eye to New York.)

In other news of What Kate’s Reading, look for two new features in the upcoming year: a weekly roundup of book blog giveaways and an irregular series spotlighting independent bookstores around the country…maybe even the globe! Expect more monthly giveaways, and the continuance of the popular Unbuttoned Yet Tucked In series, reviewing romance novels chosen specifically for their cringe-inducing covers. In personal news I’ve had a small publisher ask for my manuscript, which while in itself doesn’t necessarily mean anything, still feels pretty damn good.

Many, many warm and heartfelt thanks to Ana and Thea, the amazing Book Smugglers!

Thank you Kate for yet another fascinating article!

Next on Smugglivus: Li of Me and My Books