Day 18 (8 days to Smugglivus and counting)

Who: Stephen Hunt, writer of Fantasy (steampunk) books. Stephen is also now on the management, technical and editorial boards for SFcrowsnest.com, the science fiction and fantasy web site which is currently ranked as the Internet’s second most popular sci-fi site. 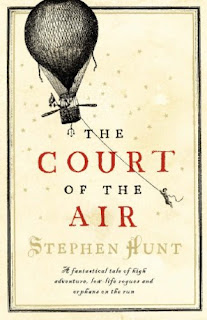 Recent Work: his third novel in the Jackelian world will be released in May 2009. We will review the firs novel in the series The Court of the Air later today.

….aaaaaaaaand we give the floor to Stephen:

One of the sad things about being an author, is that I get less time to read than I used to – my prime reading hours for 2008 having been converted into prime writing hours for my own works for HarperCollins Voyager (which this year have included copy-editing of my 3rd novel set in the Jackelian world, ‘The Rise of the Iron Moon’, and the actual writing of the fourth book, very provisionally entitled ‘The Fires of Jago’). Not to mention holding down a day job, keeping www.SFcrowsnest.com going, speaking at various conventions (aka publicity), walking the dog, doing the dishes etc etc.
That being said I have still managed to squeeze in a few books as the economy crumbled, and here’s the main genre ones…
Making Money by Terry Pratchett.
This book follows El Tel’s slightly reformed con-man character Moist von Lipwig, who previously appeared in Going Postal as the reluctantly blackmailed new head of the post office. How can you top that? Why, high finance of course. Making Money was written and published pre-serious credit crunch, and I wonder if having to sort out a seriously badgered finance system seems quite so funny now that we’re all paying for the masters of the universe’s heady bonus years (and the pain ain’t over yet – wait till the derivatives and futures nightmare comes home to roost).
Anyway, city dictator of Ankh-Morpork, Vetinari gives von Lipwig the task of modernising the city’s financial system from the gold standard to a paper currency. And naturally, enemies come out of the woodwork as he tries to create a new order. Much hilarity and satire results. In retrospect, this might be seen as the highpoint of Terry’s career. It has all any disk world fan has come to expect from the master and more.
The Dreaming Void by Peter F. Hamilton.
The near-eternal life and Federation-style prosperity of the Intersolar Commonwealth is unsettled by a massive black hole at the core of the galaxy (not a natural singularity. Inside there is another universe where the laws of physics are very different from ours). Outside the hole, Inigo dreams of a paradise inside the Void and attracts a religion of millions who want to make a dangerous pilgrimage inside the black hole. Other races worry the pilgrimage will cause the Void to expand without end and go to war to stop it. A enhanced walking weapon of a man called Aaron who resembles a kind of cyperpunk Jason Bourne is trying to find the messiah and stop the war, while inside the void a young teenager called Edeard is coming of age and honing his genetic engineering and telepathy skills. This novel is slow and complex, but there’s a richness to it that kept me going. I love these doorstopper sized science fiction works…
Matter by Iain M Banks.
Not so long but just as detailed. Set on a giant shellworld left by a currently missing ancient race of aliens, this latest Culture novel mixes fantasy with SF, with much of the action being set inside the shellworld in the 18th-century technology eighth Level of Sursamen. The shellworld is a Big Dumb Object in the same vein as a ringworld, with dozens of floors each containing their own miniature environments. In Bank’s latest tale, The generally useless playboy prince Ferbin sees his father the king being murdered on the battlefield by the monarch’s best mate and head of the army, and the young prince has to flee for his life as the treacherous General tries to kill him.
Luckily, the prince’s sister Djan Seriy Anaplian is an agent of Special Circumstances, and as she looks into her father’s death back in the primitive world she grew up in, she realises that there’s various species all jostling for power on the shellworld: the Morthanveld, the Nariscene and the Oct. Matter has a very bloody ending, just a little too short, but one that will keep fans of movies like The Wild Bunch satisfied.
The Ashes of Worlds by Kevin J. Anderson.
Space opera as soap opera, and you kind of feel guilty about reading it. This is the last in the series. There’s a battle royal going on between various elder races. Humanity, the Ildiran Empire, the water elementals and sentient trees, have just defeated the gas-giant-living hydrogues. But the fiery elementals, the faeros, and the lost hive race of the Klikiss, have come back to eliminate pesky humankind. If that wasn’t enough, the Terran Hanseatic League’s chairman, Basil Wenceslas, wants all of humanity back under league control come what may – and sod everyone else. This really is Dynasty and Dallas re-cast in space, but who cares. The pages keep on turning regardless.

House of Suns by Alastair Reynolds.
Now this is space opera as space opera, shades of Dune, which I loved as a kid! Purslane and Campion are two immortal clones from a far-future house (called the House of Flowers), who have left Earth to travel the galaxy. They’ve been jumping between the stars for millions of years in suspended animation and are about to meet up with their fellow clones for a regular catch-up when they realise that their genetic line has been purged from the universe and someone wants the two of them dead too. Much mystery ensues and I best say no more, less I start giving away spoilers.
As for 2009, I’m really looking forward to getting around to reading The Graveyard Book, which, from what I understand, is a dark horror-fantasy take of Rudyard Kipling’s the Jungle Book. RK is one of the great underappreciated masters of English fiction, and I’m looking forward to seeing what Neil Gaiman has done with this timeless classic. Also on the reading list is Best Served Cold by Joe Abercrombie. I have a feeling Joe is going to be going medieval on my ass again. Let the blood run in the New Year!
My greatest regret for this year is that David Gemmell is among us no more, and I think I’ll be re-reading a lot of his works from my shelves just to make up for the fact that they’ll be no more of Dave’s new works winging their way to the book-shop.

A huge thank you to Stephen and a Merry Smugglivus to him!
Next on Smugglivus: Linnea Sinclair
Fantasy
1 Comment
By Ana