Day 3 (23 days to Smugglivus and counting)

Who: Meredith Duran, romance novel writer who debuted in 2008 with a romance many hail as one of the best of the year. It has made Ana’s top 10 of 2008. 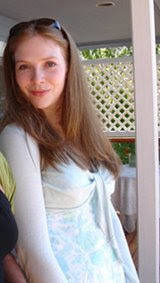 Recent Work: Her first book The Duke of Shadows was released earlier this year. You can see our review here and a chat we had with the author here. 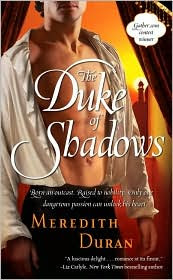 Occasionally, before The Duke of Shadows was published, I would come across interviews with authors who said that once they became professional novelists, the idea of reading fiction lost its appeal. Some said that non-fiction fed their muse more heartily. Others said their enjoyment of a good novel was hampered because they found themselves approaching it in an analytical fashion, working out why this worked and that hadn’t, and thereby yanking themselves out of the story.

I am very relieved to say that this hasn’t happened to me yet. 2008 was an awesome year to be reading romance. And picking just a few books from the new additions to my keeper shelf is going to be difficult. I’ll start out dramatically, then: I will betray my first love, historicals, by confessing that my year began with a paranormal bang.

First I discovered Ember, by Bettie Sharpe. Ember is a wickedly original retelling of Cinderella, with a fantastic heroine and some of the most unexpected and delightful prose I’ve encountered. If you haven’t read it yet, I strongly recommend you set aside a couple of hours. It’s available for free on Bettie’s website:

Then I picked up Demon Night, the fifth book in Meljean Brook’s The Guardians series. In many contemporary paranormals, the “ordinary world” seems invisible. This often works very well, but Brook’s novels are fascinating precisely because she creates a complex, original, finely detailed universe (with angels and demons and vampires!), and then shows how this world overlaps with the mundane, everyday routine of contemporary urban America. As a result, her larger-than-life characters achieve an immediacy and credibility that are riveting. When talking about her books, I often find myself using phrases more typically associated with historicals: “lushly atmospheric” and “richly textured,” for starters.

Back to the historicals (I couldn’t neglect you for long). This year introduced me to three new favorites. First, Joanna Bourne, who owes me at least two nights’ sleep for my bleary-eyed sprints through Spymaster’s Lady and My Lord and Spymaster. Her plotting, her distinctive voice, and her brilliant skill with deep POV (seriously, you could open any page of either book at random, and know within two sentences whose head you’re in) dazzled me.

I am embarrassingly late to the game with Jo Goodman, whom I discovered when I picked up If His Kiss Is Wicked in February. Brilliant plotting, rich characterization, witty dialogue, and searing sexual tension: what more can you ask for? I bought The Price of Desire the day it released, and marveled again at how deftly and thoughtfully Goodman handles very serious issues, even as she constructs an immensely satisfying romance. And then I glommed her backlist.

Finally, Sherry Thomas’s Delicious was a wholly unique treat from start to finish. It’s probably the only novel I’ve read, apart from Dickens’ Bleak House, in which I dog-eared a page because the description of the weather startled and delighted me. On page 206, Verity reflects:

That is writing, y’all.

There are a dozen more books begging mention, but with 2009 tapping on our calendars, I’ll look ahead to three much-awaited releases. In January, I’ll go to the bookstore for Susan Elizabeth Phillips, my favorite contemporary romance author, and her new release, What I Did For Love.

Since As You Desire and All Through the Night have been on my keeper shelf for many years (and have survived many spring cleanings thereof), I am understandably excited for February, when Connie Brockway returns to historical romance with So Enchanting.

Finally, in March, Shana Abe continues her paranormal historical series about the Drakon with The Treasure Keeper. I was lucky enough to score a copy of The Dream Keeper at RWA this summer, and I read it in one sitting. I can’t wait for the next installment.

Pretty soon thereafter, my year is going to get busy. Early summer (June, to be exact) brings the release of my next historical, Bound By Your Touch — featuring a hero who delights in breaking the rules, and a heroine who specializes in studying them. It isn’t a comedic book by any means; each of the characters has a dark core that the other must uncover and try to heal. But I found the hero immensely entertaining to write about, all the same. As one character puts it,

“He could sweet-talk Russia out of Afghanistan, and the Queen back into colors. That’s Sanburne for you; his joie de vivre is infectious…if a little wild.”

In July, I shift tone as my third historical romance, Written On Your Skin, is released. Phin, the hero of this book, has no desire to be charming. Rather, he is cool, collected, and calculating—because he fears what would happen if he weren’t. Alas for Phin, he has found his match in Mina Morehouse, who has absolutely no interest in being controlled or manipulated, and is utterly determined to undo him.

So, that’s July. And somewhere in this timeline, I’ll be heading off to India for a year of research for my degree. 2009 will be busy. But in all the excitement, one constant will remain: reading. I’ll be lugging the newest releases of my favorite authors with me wherever I go, because in 2008, I not only became a published author, I also reaffirmed a basic truth: I am a reader for life, and romance is my genre of choice.

NEXT ON SMUGGLIVUS: LORETTA CHASE