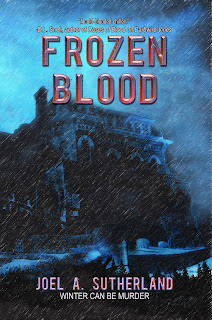 Why did I read this book: When we contacted Joel to participate in Smugglivus, he graciously agreed and offered us a review copy of his first novel, Frozen Blood! As Joel was our very first review request here at The Book Smugglers (for Fried! Fast Food, Slow Deaths), it seems like a wonderful way to come full circle on the year with Frozen Blood. (Plus, I really enjoy Joel’s short fiction and could not wait to see what he would do with a full length novel!)

Summary: (from JoelASutherland.com)
Summoned to her abusive father’s funeral, Tara Stewart drives alone through the pitch-black night from Charlotte to Ottawa, haunted by the ghosts of her past. She hasn’t spoken to her family in years, and the last place she wants to be is in the company of her vindictive twin sister and her shady brother-in-law.

And then the hail begins to fall.

Barely making it to Ottawa alive, Tara falls on the icy driveway and is dragged inside as she loses consciousness. Her sleep is troubled and plagued by nightmares, and she awakes in the middle of the night to see her late father standing at the foot of her bed, warning her that she’s in great danger. Her sister has drugged her, and plans to do much worse.

Outside, the hailstorm is still raging. Reports on the news suggest that it is a worldwide catastrophe.

Now prisoners in their own home, the three estranged family members must try to survive the worst storm in modern history. But Tara must also survive the voices in her head, the ghosts that haunt her father’s house, and the family she’s trapped inside with. They want something of hers, and they’ll do anything to get it…

And the hailstorm shows no signs of dying anytime soon.

Tara Stewart is, quite simply, a mess. Recovering addict & alcoholic, Tara also is afflicted with a long and twisted family history of abuse, blame and guilt. Frozen Blood opens with Tara driving up to Canada for her father’s funeral, at the behest of her twin sister Evelyn and Evelyn’s husband Peter. The twins have not spoken for a long three years prior to Tara’s drive up to Ottawa, having ended their relationship bitterly over Evelyn’s daughter Amy’s death. Tara has since sobered up, on the wagon, and undergoes intense therapy to help work out her problems–but she’s still anxious and irritable on the drive up north, not looking forward to seeing her sister and brother in-law in the slightest. Plus, Tara’s been seeing ghosts. Prone to daydreaming and lingering on the past, Tara zones out and is also paid a visit by her father’s ghost during the drive. To make matters worse, it starts to hail, and Tara is in a nasty car accident not too far from her father’s house. When she awakens, Tara finds herself in bed, carried and drugged by Evelyn and Peter. Tara’s still seeing ghosts who are telling her some strange, dark things, and she is completely on edge with her family. Meanwhile, the hail storm pounds, the death count rises, and some serious family confrontation goes down.

Frozen Blood is a trip. It is a surreal tale, alternating between Tara’s present-time experiences, then jumping quickly into flashbacks and visions of ghosts in an almost stream of consciousness type of writing. While initially this was disorienting and made it difficult to get into the flow of the story, as the book progresses the style becomes more convincing, lending an air of paranoia and delusion to these trapped, tense characters. What I came to love most about Frozen Blood was this purposeful sense of disorientation, the delicious strangeness and level of surrealism to the book. It comes as no surprise that Tara is a paranoid schizophrenic, prone to hallucinations…but is that all that’s going on? As Tara is plunged into memories of her niece Amy, her long gone girlfriend Jess, her illicit past as a teacher, it becomes harder for her to separate her demons and ghosts from reality–the ghosts of Amy, of her father, even a ghost version of herself, all of which tell her things that inexplicably turn out to be true. An interlude at a radio station with a completely separate character who undergoes her own crazed violent hallucinations seems to also suggest that Tara’s descent into complete psychosis isn’t the only viable explanation for the events of the novel. (Or is it that Tara hears the cabin fevered DJ and substitutes that story to draw similarities to her own experiences, explaining away her mental deterioration, deluding herself into thinking that she isn’t sick?) It’s with this sense of uncertainty–is the hailstorm causing these delusions? Is it the apocalypse? Is Tara just really effing nuts?–that the book really shines.

It’s all very strange and surreal, but in a fantastic (if slightly confusing) way.

The other thing I loved about this book is how tauntingly slowly each piece of Tara’s past is revealed. For example, I loved her interludes with Amy, illustrating Tara as a sympathetic character and a loving, doting aunt to her darling niece. And suddenly, the next interlude shows Tara as a manipulative, selfish woman in an illicit relationship with a young man. Tara’s sister, Evelyn, is similarly deconstructed. At face value, and from the introduction to the character, Tara comes across as a deeply troubled woman–abused, alcoholic, needy, unstable. Evelyn, meanwhile, is composed and rich, married and successful. Her disgust with Tara is understandable. And yet, bit by bit, Mr. Sutherland reveals the grimy underlying layers of Evelyn’s character–desperate to blame anyone but herself for her misfortunes, depressed and completely unstable herself. As the story progresses building to a crashing crescendo of a climax, these two incredibly flawed characters are gutted, ripped apart and laid bare for the audience–and I loved every second of it.

While the characters and the idea for writing style for Frozen Blood are wonderfully cerebral and effective, there were some shortcomings so far as execution and delivery of these ideas go. The book begins slowly and unevenly, just a little off-kilter. There’s overly repetitive imagery, and a tendency to end chapters on a sort of movie-of-the-week commercial-break-cliffhanger (this isn’t a bad thing per se, and it’s a popular technique with many authors–just my own personal reading preference). While there were some problems, the important thing about Frozen Blood (and to a further extent, about Mr. Sutherland as an author) is the incredibly creepy atmosphere and the strength of ideas behind the story. Imagery and narrative technique can be learned and honed skills; but the ideas and underlying concepts are either there or they aren’t. While Frozen Blood very much feels and reads like a debut novel, it works so well because it has these terrifying concepts in abundance (in addition to the aforementioned strength in characters and atmosphere). And that, ladies and gentlemen, is the mark of a promising new talent.

Notable Quotes/Parts: Besides the frenetic, bizarre climax, the most emotional scene is when the reveal is finally made as to Amy’s death, and why Evelyn blames and hates her sister Tara so much. What’s better is that the scene is with Evelyn’s thoughts and perspectives.

Realizing for the first time how silent the room had fallen, Evelyn allowed her husband to help her stand up and escort her into a privacy room. She suddenly felt like she’d overreacted. But as much as she didn’t want to admit it, it had felt good to say those things to her sister. It had lanced some of the pain out of her body. Her mind went too fast for her to keep up, and she grew unsure of what was right and what was wrong. Unsure about her sister. Unsure about herself.

The one thing I am sure about is Amy’s gone.

Verdict: Frozen Blood is everything you could want in a psychological horror novel: it creeps, it disturbs, it pushes its characters to the brink of insanity…and then nudges them off the edge and into the abyss. Though it is not without execution flaws and first-novel shakiness, it is clear that Joel Sutherland is a strong up and coming talent. And I, for one, cannot wait to see what else this young author has in store for the speculative fiction genre.

Reading Next: Life As We Knew It by Susan Beth Pfeffer

NEXT ON SMUGGLIVUS… Maria V. Snyder

HorrorJoel A. Sutherland
11 Comments
By Thea