There I was yesterday, minding my own business at work when out of their own accord my sneaky little fingers (bad, bad fingers) decided to open Internet Explorer and go the website of The Best Movie Magazine in the World AKA Empire Magazine. And lo and behold, there was a bunch of cool news – Arrested Development, the movie! Woohoo! – including a new set of totally awesome posters for Watchmen (one for each of the main characters), the movie we are dying to watch – out March 2009!

So instead of just posting the pictures, I thought, hummm, that would be a cool Saturday poll! So here we go:

Which poster for the upcoming Watchmen movie do you like best?

Is it the one with Rorschach (Jackie Earle Haley) – the character who sort of narrates the story and who out of the group, is the only one still acting as a super-hero – a vigilante rather, who sees the world in black and white – after superhero activities have been banned? 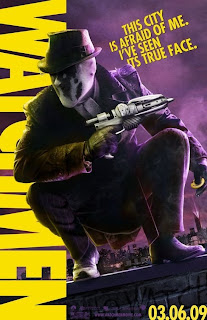 Or the one with The Comedian (Jeffrey Dean Morgan) – the former superhero turned paramilitary agent who is a brutal and nihilist anti-hero whose death sets the events of the novel in motion? 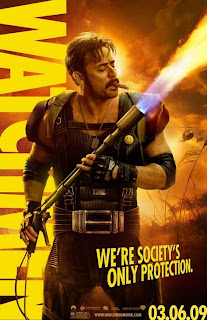 Or maybe the one with Nite Owl (Patrick Wilson) – whose “superhero” abilities rely more on his technical savvy and cool gadgets – the Owlship! The Owlship! – than on his physical powers specially after they are retired and he becomes rather chubby. Donning his costume once more adds a degree of self-confidence to a character that begins the novel completely impotent – in all levels. Do you want romance with your Watchmen? Here is your guy. 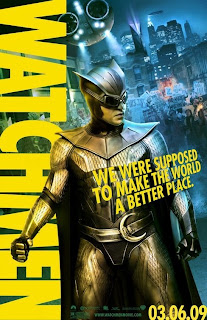 What about the one with The Silk Spectre (Malin Akerman)– the only woman in the group who pushed into being a superheroine by her mother, the first Silk Spectre, she later assumes all the kick-assness necessary to her role when she, one more, turns vigilante alongside Nite Owl – with whom she becomes romantically involved. 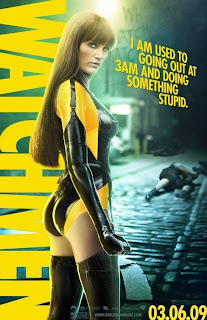 Or the one with Ozymandias (Matthew Goode) – possibly the smartest man in the world, and one who has become rich after marketing his superhero image. Extremely fit for a man in his forties, and with a penchant for master strategy, Ozymandias may be more than what you think…. 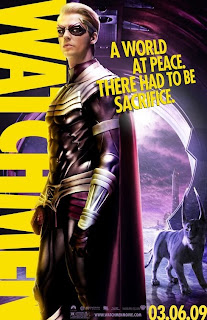 And finally could it be the one with Doctor Manhattan (Billy Crudup) ? The only one in the group with real powers (after a nuclear physics accident completely disintegrates him and he reforms completely changed – and blue) ? With a growing detachment from humanity but whose powers may well save the planet he doesn’t care about? or does he? 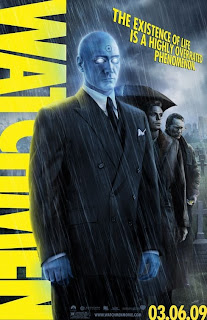 And I will close the post with the new trailer! ( if this movie turns out to be crap, I will be devastated because the trailers, the posters, the actors and the source material are all well, awesome. )