Book Review: Silent in the Grave by Deanna Raybourn

Title: Silent in the Grave 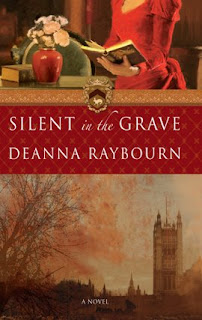 Stand alone or series: Book 1 of a (soon to be) three book series.

Why did I read this book: I had picked up Silent in the Grave earlier this year after reading some excellent reviews for it online…then it sat on my TBR shelf, all but forgotten. Then, last week, Kate (of the always excellent What Kate’s Reading) mentioned that the book was one of her favorite reads of the year, and admonished me for letting it be absorbed into The Blob (my new name for my ever-growing TBR mountain that will never be conquered)! Thus, I extracted my copy from Blobby, and got down to business.

Summary: (from amazon.com)
These ominous words, slashed from the pages of a book of Psalms, are the last threat that the darling of London society, Sir Edward Grey, receives from his killer. Before he can show them to Nicholas Brisbane, the private inquiry agent he has retained for his protection, Sir Edward collapses and dies at his London home, in the presence of his wife, Julia, and a roomful of dinner guests.

Prepared to accept that Edward’s death was due to a long-standing physical infirmity, Julia is outraged when Brisbane visits and suggests that Sir Edward has been murdered. It is a reaction she comes to regret when she discovers the damning paper for herself, and realizes the truth.

Determined to bring her husband’s murderer to justice, Julia engages the enigmatic Brisbane to help her investigate Edward’s demise. Dismissing his warnings that the investigation will be difficult, if not impossible, Julia presses forward, following a trail of clues that lead her to even more unpleasant truths, and ever closer to a killer who waits expectantly for her arrival.

To say that I met Nicholas Brisbane over my husband’s dead body is not entirely accurate. Edward, it should be noted, was still twitching upon the floor.

Lady Julia Grey and her husband Edward are hosting a dinner party when Edward is taken violently ill and collapses. Shortly after, Edward dies, presumably due to his weak heart–yet another victim of the Grey family curse, in which many of the males of the bloodline die young because of physical infirmity.

Left a surprisingly wealthy widow following her husband’s death, Lady Julia finds herself curiously numb. For so long, her life had been determined by her husband–from the decorations in the home, to the colors and fashions she had worn. Enter Julia’s colorful family, the distinguished Marches–known for their rich lineage, political prominence, and most of all, their flair for rebelliousness. Julia’s father, Lord March who had never approved of his youngest daughter’s marriage to her childhood sweetheart (in fact offering just before walking her down the aisle to spirit her away immediately), and Julia’s elder sister Portia (who had scandalously taken her cousin Jane as a lover following the death of her own husband years before) encourage Julia to seize control of her life, step out from the drab gray shadows cast by her husband, and to show some of the impulsive adventurism for which the Marches are known.

And so Julia does, when she makes the formal acquaintance of Mr. Nicholas Brisbane. She soon discovers that Brisbane had been hired by Edward because he had been receiving threatening, ominous threats and had feared for his life, and Brisbane was investigating the case. As such, he warns Julia that he suspects her husband’s death was not due to natural causes, but murder. Although initially Julia brushes off his accusations, when her year of mourning has been completed she discovers one of the threatening notes and cannot ignore it. She enlists Brisbane’s reluctant aid and embarks on an earnest investigation of Edward’s death, uncovering a marriage full of secrets and deceit, and yet discovering herself, as a strong, unique woman in the process.

From the very opening lines of Silent in the Grave, I was hooked. It’s hard to believe that this is Ms. Raybourn’s debut novel for it is truly stunning–a heady Victorian-era mystery with complex characters, flawless pacing, and written beautifully in a crisp, strong voice. Even though the intrigue surrounding Edward’s death thickens and the story takes a more serious, even tragic turn, it is wonderfully balanced with a dash of romance, friendships, and the irrepressible spirit of the March family.

While this is a murder mystery, at its heart Silent in the Grave is a tale of self-discovery. Narrated in the first person by Lady Julia, she grows from a repressed individual desperate to fit into a ‘Normal’ mold–as seen in her conventional, by the numbers marriage to her childhood sweetheart and proper society connections–to a bold, unique woman, finally comfortable in her own skin. I loved how her transformation manifests both physically and emotionally, as Julia gradually loses her desire to be the perfect society wife and widow. Physically, she chooses fashions she longs to wear after her year of mourning, casting aside her namesake Grey and widow’s weed blacks, instead favoring bold crimsons and greens, and crops her long hair. Emotionally, she abandons the balls and dinners she had found so tedious as a wife, and her pursuit of an investigation with the dangerous, enigmatic Mr. Brisbane embodies this change of mentality. Even her narrative grows more self-assured with each passing chapter!

Nicholas Brisbane, through Julia’s eyes, is the opposite of her cold Edward in every respect. Dark, heated and emotional where Edward was fair, mild and detached, Brisbane and Julia have an electric dynamic. In many ways, he represents everything Julia had repressed in her desire for Normalcy–and she fights with these emotions (subconscious or repressed as they may be) through the novel.

As for the host of other characters, they are all wonderfully portrayed, each feeling completely distinct and authentic. I loved Ms. Raybourn’s particular spin with the March family–how often have I read books where a spirited young heroine rebels against her strict, proper family? In this novel, the family criticizes Julia for her decided lack of March-ishness–to the point where they encourage her to be reckless and daring! I loved Julia’s father, her sister Portia, her strange aunts and her secretive younger brother–it has been a while since I have had the pleasure of reading a family such as the Marches, full of life and spunk and character. The other secondary characters–particularly Julia’s butler Aquinas, reformed prostitute maid Morag, and the (in)famous courtesan Hortense de Bellefleur–also shine.

As for the mystery itself, all I can say (without fear of spoiling) is that it is perfectly executed. It is certainly no shocker when the killer is revealed, but there are enough twists and turns along the way to make for an exciting, at times shocking, tale.

Silent in the Grave is a stunner of a debut–and I cannot wait to read Silent in the Sanctuary (book 2), and eagerly await the release of Silent on the Moor early next year!

Notable Quotes/Parts: A sample of Lady Julia’s delightful narrative, as she grows ever bolder and takes initiative of the investigation:

It took me the better part of the next day to write my letter to Doctor Griggs. I had not expected it would be so difficult, but striking just the right balance of wifely concern and abject stupidity was harder than I had anticipated. In the letter, I claimed that although my year of mourning was nearly finished, I thought of Edward more than ever. I told him that he came to me in dreams, mouthing words I could not hear, but that I had read somewhere that this was a clear sign of murder. I begged him to tell me if there had been any indication whatsoever of foul play. I pleaded with him to give me every detail of Edward’s collapse and death, especially the few hours I had been kept away from him. I reminded him of the long history between our families and gently hinted that a man of his genius would have easily seen something amiss. I flattered, I cajoled, and in the end, I sprinkled a few drops of water over the ink to simulate tears. I was a little ashamed of myself for enjoying it so much, but that soon passed.

Additional Thoughts: Like the threatening letters Julia discovers, each chapter of the book begins with a brief yet pertinent quote–the majority of which are lifted from various works of Shakespeare. This isn’t a preferred method of storytelling for me, but I loved it in this novel. How very appropriate, considering the mystery. Form truly does equal content. My favorite? “For sweetest things turn sourest by their deeds; Lilies that fester smell far worse than weeds.” ~ Shakespeare “Sonnet 94”

Rating: 8 Excellent – although again, leaning heavily towards a 9.

Reading Next: The Graveyard Book by Neil Gaiman