Book Review: Magic to the Bone

Title: Magic to the Bone 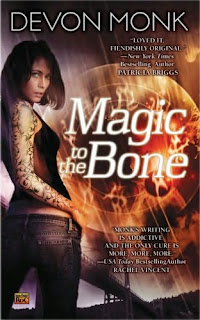 Why did I read this book: We were sent an early copy, and the premise for the universe sounded wonderfully fresh. Plus, I am always on the lookout for a new Urban Fantasy series, and given the author blurbs on the cover (Patricia Briggs for one), I was very excited to get started with this debut novel.

Summary: (from Amazon.com)
Devon Monk is casting a spell on the fantasy world…

Using magic means it uses you back, and every spell exacts a price from its user. But some people get out of it by Offloading the cost of magic onto an innocent. Then it’s Allison Beckstrom’s job to identify the spell-caster. Allie would rather live a hand-to-mouth existence than accept the family fortune—and the strings that come with it. But when she finds a boy dying from a magical Offload that has her father’s signature all over it, Allie is thrown back into his world of black magic. And the forces she calls on in her quest for the truth will make her capable of things that some will do anything to control…

Allie Beckstrom wakes up on the morning of her 25th birthday, oblivious to the fact that her life is about to go through some drastic changes. Receiving word from not-quite-a-friend named Mama, Allie leaves her apartment for St. Johns in Northern Portland, an area notorious for its shady dealings, but also for its willing defiance to the magic that seeps through the rest of the city. In this universe, magic has only just recently been discovered in the past 30 years, and due in large part to the efforts of Allie’s entrepreneurial father, Portland has been fortified with glass and steel lines to tap the natural magic pooled in reservoirs beneath the city. Magic, however, is not all ponies and rainbows–as Allie would say, like any other drug, magic gives as well as it gets. For every time magic is used, it extracts a price on its user–pain, sickness, memory loss, even to the point of physical scarring or death. There are ways of disbursing the effects of magic–choosing how and when the payback hits the caster, or by setting up a proxy–willing, or unwilling–to take the hit by Offloading.

When Allie reaches Mama’s restaurant, she finds one of Mama’s Boys (her sons, all addressed as “Boy”) has had a nasty hit put on him; he is sick and needs serious medical attention as he is absorbing the effects of a powerful spell. Allie happens to be a Hound–that is, she is something akin to a magic detective. Like the occupation’s namesake, Hounding involves using magic to detect a trace or source. In this case, Allie Hounds the hit on Boy and finds that the source is none other than her father. Joined by the mysterious and gorgeous Zayvion Jones, Allie leaves Mama’s to confront her father about the hit. The relationship between father and daughter is severely strained–Allie’s father having used magic to Influence Allie’s every decision since she was a child–and yet for all his ruthlessness, Allie cannot understand why he would put a hit on an innocent young boy. And, somehow, when she questions her father, he is completely truthful in answering her truth magic–he had nothing to do with the hit on Boy.

Tired, dejected, and just learning that Zayvion has been hired by her father to tail her, Allie decides to call it a day, only to discover the next morning from the daily paper that her father has been killed…and all the Hounds on the case confirm it was Allie’s magical signature. Chased by a Hound that acts like a psycho-Cheerleader, the police at the behest of a stepmother Allie has never met, and dragging a comatose young boy with a strange affinity for magic–Allie is in serious trouble. Not to mention the numerous confusing growing physical and emotional attraction to Zayvion, and dealing with the shock of her father’s death.

Magic to the Bone is a wonderful debut novel in what looks to be a promising new Urban Fantasy series. The scale of universe building and Ms. Monk’s intriguing take on magic as almost a drug with heavy consequences, as opposed to simply waving a wand or saying a few words with nearly no backlash, is unique, fresh, and dare I say completely logical. One thing that irks me to no end in fantasy novels–particularly of the Urban or Romantic subgenre–is the reckless use of magic without any affect on its wielder. Newton’s second law, balance and all that goodness. I love the application here and the vivid terms to describe magic. Initially, I was worried that about the authenticity of the people living in such cities filled with stinking (literally) magic, surrounding and permeating every facet of their lives, especially with its negative consequences on anyone that used it. BUT, then the little voice in my head reminds me that we humans do this all the time in our cities–polluting our air with car exhaust and other chemicals for the sake of convenience and progress, ever since the Industrial Revolution, etc.

In terms of characters, Allie is a young tough talking heroine, pretty but not too sexy. She’s wisecracking and smart but still likable enough, if somewhat stereotypical. Also, in the tradition of UF heroines, Allie is powerful, but discovers that she is extra powerful as the story rolls on (I should also mention that the story is told in the first person from Allie’s perspective). Not that any of this is bad, it’s simply been done before. Zayvion Jones, as the sexy foil to Allie, certainly is appealing and fans of the more romantic UF titles (such as Patricia Briggs’ Alpha and Omega, or Karen Chance’s Cassandra Palmer books) will certainly love the romantic subplot in this story. Although I wish things were a little more developed between Zay and Allie, I loved the twist ending, and despite these two feeling a very strong attraction to each other, they still aren’t able to fully trust each other. It lends a sort of realism to an idealized romance, and I very much appreciated it.

Plotting-wise, this book also shines. There’s a lot of action, palpable danger, and a lot of enticing loose ends that will be carried out in further novels. A secret society, a surprising step-mother, magic that behaves in ways that it never has before, and the simmering of a war are all mouthwatering storylines I cannot wait to continue reading of in the coming sequels.

If I had to site things I wasn’t crazy about in this book, it would be with some of the colloquial choices for writing style, i.e. the constant repetition of “Oh loves…”–why loves(to be fair I find this type of unexplained different phrasing odd in a lot of SF)? The very traditional superpowerful heroine with the standard backround/track record, the over-used first person narrating voice, and the too good to be true romance all are a bit bland as well–but the superb world building and those few tweaks Ms. Monk throws in, especially in terms of plot, pacing and complications definitely compensate for any of those drawbacks.

Notable Quotes/Parts: The climax of the story–which of course I won’t quote here–is powerful. Literally. There’s a lot of angst and a turning point for Allie, which is pretty damn cool.

Additional Thoughts: The portrayal of magic in this book, as I have mentioned above, is awe-inspiring. What other portrayals of magic and magic use do you appreciate (or can’t stand, conversely)? Would magic be more like a muscle, improving with practice, strengthening but with the possibility of being strained or torn? Is it like a drug or is its nature such that it extracts a hefty toll on its wielder? Or is it like breathing air?

Verdict: This is a very strong debut in a highly promising new series. Devon Monk’s universe in Magic to the Bone is, simply put, scintillating. I cannot wait to read more. Recommended for any Urban Fantasy–or paranormal romance–fan.

Rating: 7 Very Good–leaning to an 8 because of the superb world building, but just falling shy because of the by the numbers characterizations…and because I expect good things from this series in the future.

Reading Next: Graceling by Kristin Cashore

Book Review: The Orphan of Awkward Falls by Keith Graves