The Dare: The Shadow of the Wind

Title: The Shadow of the Wind 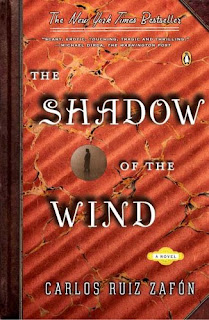 Stand alone or series: As is, it is a stand alone book–but author Carlos Ruiz Zafón has two more books, a prequel to this one and another tale told from the point of view of one character from this novel in the works.

Why did I read this book: Ana dared me to do it. This is one of Ana’s Top 5 Novels of All Time–and after reading the novel summary, I could not wait to get started.

Summary: (from Amazon.com)
Barcelona, 1945-A great world city lies shrouded in secrets after the war, and a boy mourning the loss of his mother finds solace in his love for an extraordinary book called The Shadow of the Wind, by an author named Julian Carax. When the boy searches for Carax’s other books, it begins to dawn on him, to his horror, that someone has been systematically destroying every copy of every book the man has ever written. Soon the boy realizes that The Shadow of the Wind is as dangerous to own as it is impossible to forget, for the mystery of its author’s identity holds the key to an epic story of murder, madness, and doomed love that someone will go to any lengths to keep secret.

Every once in a while, a book comes along that renders you speechless; wringing your heart with emotions too powerful to put into words; leaving you drained yet sated, joyously happy that you were able to find such a rare treasure, and yet inexplicably sad that it had to come to an end.

The Shadow of the Wind is one such book.

Set in post-World War II Barcelona, a widower takes his ten year old son to a wondrous place that will change his life forever: The Cemetery of Forgotten Books. Daniel, the young boy, is told that he cannot reveal to anyone the secret tomb, not even his best friend Tomas. Solemnly agreeing, he and his father enter the labyrinthine library. The rules of the Cemetery are simple: Daniel must pick a book, and promise to do everything in his power to ensure that book does not disappear, forgotten from the face of the earth. Almost immediately, Daniel sees a crimson volume on a shelf, entitled The Shadow of the Wind–and in that moment he knows this is the book he is meant to care for, as if it were sitting there, waiting for him to pick it up.

That evening, Daniel reads the mysterious novel, and at once he is captivated, lost to the writing. The author, Julián Carax, bewitches young Daniel and he begins his quest to find his other books. Daniel’s father, though a rare book seller, has never heard of the man, nor of The Shadow of the Wind–but he turns to a business friend, Barceló, for his opinion. Initially, Barceló tries to purchase the book from Daniel, knowing how rare and sought after Carax’s work is. Daniel holds true to his promise and refuses, and Barceló cannot help but be moved by his devotion and decides to help Daniel by introducing the young man to his niece, Clara, who has ‘read’ Carax and is just as captivated as Daniel. Ten years Daniel’s senior, Clara is completely blind, but incredibly beautiful, and he loses his heart to her in that first meeting. From Clara and Barceló, Daniel learns that very little is known of the enigmatic author–just that his books are even more rare and mysterious because some unknown figure has been systematically burning every copy of Carax’s work.

Daniel’s story spans years, and as he grows into a young man the threads of fate entangle him tighter, deeper into the mystery of Julián Carax. On the evening of his sixteenth birthday, Daniel comes face to face with the shadowy figure who has been destroying the books–a man who calls himself Laín Coubert, a character from The Shadow of the Wind, the Devil himself. Coubert tells Daniel to give him the book, and to stop looking for Carax, before it is too late.

But, as stories of this nature go, Daniel is already caught in fate’s tangled web. Daniel discovers that Julián Carax’s tale is one of star-crossed lovers; of friendships both broken and indestructible; one of bitter jealousy and revenge; and ultimately, a tale of redemption. Of hope.

I do not think I have the words to describe how earth-shaking, how powerful this book is. The Shadow of the Wind is damn near flawless, evoking a tumult of emotions, painting characters so vibrant they come to life off the page demanding your full attention, all written in a completely engaging, epic saga of a mystery. And the writing! Carlos Ruiz Zafón’s prose flows beautifully, heartachingly. As I mentioned to Ana, this is one of the finest translations I have ever read–Lucia Graves captures the lyrical beauty of Ruiz Zafón’s work. I speak a little spanish, and can feel how the translation channels the book’s native tongue. The similes and metaphors never seem forced or overly-literary (in comparison, recently I was reading Blindness by Jose Saragamo, and I could not stand the style of writing because of the abuse of poetic license). The Shadow of the Wind is the rare book that has literary aspirations and completely succeeds–for me, anyways.

Daniel Sempere narrates this tale, from the first person perspective–a bold, effective choice. Through Daniel’s perspective, we see his human frailty, his brutal honesty, his fears and loves and heartbreak. From the instant the self-absorbed Clara Barceló traces the outlines of Daniel’s worshipping young face, I already confess to have fallen in love with the boy, and much like his father Sempere, I only wanted the world for him. My favorite character, however, has to be the loquacious, indestructible force of nature that is Fermín Romero de Torres. An unapologetic, anti-government leftist–in the clutches of Fascist Spain–Fermín’s incorrigible spirit adds humor and a tenderness to a gothic novel shrouded in darkness and mystery. Not to say that Fermín is a clown–even his levity comes at a price, and his steely mettle beneath the loud persona is incredibly touching. Even the hideous Fumero is treated with delicacy and skill. Every character enriches this tale–from the femme fatale Nuria to the innocent Penelope, the bitter Fortuny and Aldaya family. Each adds a different texture and a depth to the novel.

The Shadow of the Wind only strays to melodrama once–and even at that, it simply works. By the time I had reached Nuria Monfort’s testimony, I had pieced together some of the riddle of Julián Carax–only to be awed again at Mr. Ruiz Zafón’s flair for the dramatic, and the crescendo of the ultimate climax as the last blurred details come sharply into focus.

Needless to say, I loved this book. Truly, madly, deeply. Go forth and buy it. You owe it to yourself.

Notable Quotes/Parts: There are so many parts I want to quote…but I have no desire to spoil anyone. I’ll go with one of the opening sections:

I was raised among books, making invisible friends in pages that seemed cast from the dust whose smell I carry on my hands to this day. As a child I learned to fall asleep talking to my mother in the darkness of my bedroom, telling her about the day’s events, my adventures at school, and the things I had been taught. I couldn’t hear her voice or feel her touch, but her radiance and her warmth haunted every corner of our home, and I believed, with the innocence of those who can still count their age on their ten fingers, that if I closed my eyes and spoke to her, she would be able to hear me wherever she was. Sometimes my father would listen to me from the dining room, crying in silence.

Additional Thoughts: If I had to find fault in this book, it would be with the gendered portrayals. The women of The Shadow of the Wind are victimized or cloistered, idealized or vilified. Granted, this is set against the backdrop of post-war Spain, and the story is told from the perspective of an eighteen year old male. Without anyone to come back for them, to save them, these women meet cold, cruel fates. The strength they have is only through their love for their men. This works beautifully within the framework of the story…but it’s just something I noticed.

Verdict: I loved this book. Everyone, regardless of age or genre preference, should read this novel. It is wonderful–one of the few that left me clutching the book to my chest after I finished the last page.

Reading Next on The Dare: The Woman in White by Wilkie Collins

Guest Dare: It by Stephen King