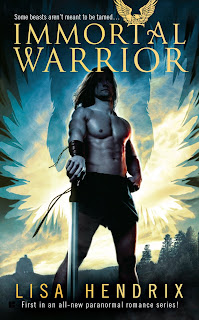 Summary: He came to England in search of treasure. Two hundred years later, he’s found her…
Ivar Graycloak is a brave warrior, a man known for his strength and integrity. He is also a man with a terrible secret. Long ago he was part of a Viking crew cursed by an evil sorceress to live for eternity as were-creatures. An eagle by day and a man by night, Ivar has lived a solitary existence for over two centuries. Then the king orders him to marry.
Lady Alaida is everything a man could want in a bride—intelligent, spirited, and beautiful—and their wedding night is a balm to Ivar’s lonely spirit. Then a seer brings him word of a dark vision, one that makes Ivar vow to stay away from his lovely wife forever. But now that Ivar has sampled Alaida’s passion, her humor and warmth, he is enthralled. His traitorous body-his very heart-longs for that which he
can never possess.
Lady Alaida may surprise him yet, though, for she has a power of her own-a power that will either destroy everything they hold dear or ultimately set them free…

Why Did I Read The Book: I received an ARC from the publishers and I decided to give it a go as soon as I learnt that it was about cursed Vikings – if you ask me, there aren’t enough historical-paranormal novels out there.

Immortal Warrior is the first in a brand new series that has a very interesting paranormal premise: In 9th century, a raid of Viking warriors are sent by their Norse Chieftain to investigate the tales of a Saxon treasure in Britain and bring the gold to him. Led by the fiercest of their warriors, Brand Einarsson, this band of brothers face Cwen, the witch that guards the treasure and the phantom army created by her and led by her own son to fight the Vikings. Slaughter ensues and Brand, their leader is possessed by such a fury and gains the strength of ten beserkers and slains every single one of them – even Cwen’s son. Consumed with grief, Cwen binds the surviving Vikings – all nine of them – and curses the warriors, turning them into shadow beasts, cursed to eternally live half day as animal, half day as man, each taking the animal form of his own fylgia, a spirit companion that each warrior carried in a chain as an amulet and which is the key to free them – she then proceeded to scatter the amulets across the world. The men tried to live together but could not since those who were beast during the day attacked those who were beast in the night and vice-versa. Forced had to live apart, their chances of ever being able to fight Cwen and end the curse are diminished. Brand, their leader, has vowed to find Cwen and make her pay. Centuries passed and still Brand seeks the Witch and all of his warriors are now settled in Britain, trying to make their living the best way they can.

Immortal Warrior is the story of Ivar, the warrior that turns into an Eagle every morning. He has settled into working for King William as a spy and as the book opens, he is granted some land and a wife by the King, for services rendered. He is, at first, torn about accepting it because how could he ever have a wife with his immortal half-life? But after centuries of living alone, apart from friends, he is taken with the very idea of having a home, a bed and a woman to sleep next to him. It is too much of a temptation to say no to and so he accepts it and plans to live like this only but a few months and then disappear. His first action though is to search for Brand and enlist his help to take care of his land – he needs to build a castle and he needs backup because the former lord stood against the Norman King and he may find resistance within the walls – maybe even from the previous lord’s granddaughter Lady Alaida, the woman that is to be his bride.

Brand, who is a bear during the day decides to help and together with another warrior, Ari, raven by night and man by day, and therefore to be Ivar’s voice during day time, the three go to Anlwick.

Things go smoothly enough for them to start with and Ivar could not be happier with his new life. The land is great and Lady Alaida, is feisty but prepared to take him as a husband even though the man is mysterious and disappears before the sunrise. They have one night together but then Ari who is a seer of sorts, predicts that there will be a baby and the baby will be an eagle. Devastated at the thought of condemning his unborn baby to such a curse Ivar starts to back away from Alaida and any relationship that they might have had starts to crumble down. He spends his day as an eagle and his nights away from her bed. Alaida is crushed and thinks he doesn’t like her but with a bit of patience and some seduction she takes him back into her bed. By that time though she is already pregnant and Ivar needs to think of a plan to take the baby away if it is born as an eagle – with the help of Ari, Brand and the healer-witch that inhabits the forest and becomes their ally.

My feeling is that with that premise this can be an incredible adventure series –a bunch of heroes cursed going through the ages looking for their freedom. The relationship between the men is engaging and sometimes even poignant. I could feel the weight of their curse, the sadness of the friends that could never talk to each other – like Ari having to leave messages to Brand and Ivar and who seems to be the lonelier of the trio, as he never gets to interact with either of them. The climax of the story with a face –off with their enemy was well done as well and I can honestly say I did not see the twist coming.

But this is not an adventure series – it is romance and this is where Immortal Warrior is lacking. I hardly cared for Ivar and Alaida’s love story. I thought there was a lack of emotion, lack of chemistry and I never truly believed in Ivo’s love for Alaida. For starters they didn’t spend a lot of time together and I was horrified at the callous way he thought about their future. Ivar was less than preoccupied about what would happen to Alaida once he was done playing house.

Although I could understand what motivated him into accepting the marriage – the despair, the solitude – this understanding was a more post-reading intellectual exercise on my part than an emotional comprehension, as my feelings were not engaged with them at all. Ivar fell into a trap and caused his own misery out of his own accord without a care about what his actions would cost to the woman he wed – it was as if any woman would do. And he did not regret the pain he would cause her, only the pain that would cause HIM. It was all for his own convenience and as the book ended I never truly felt that he went full circle and grew as a character – things were solved in a way he didn’t have to regret or revise his actions. It actually felt like he was rewarded for bad behaviour.

I was much more into Brand’s budding relationship with the healer – a woman with whom he falls in love with and whose tragic end and last lines points to an everlasting love story through the ages that has the potential to add even more angst to Brand’s life who is already loaded with guilt over being the cause for his men’s curse. If each book is to be for each of the warriors, his probably will be the last and possibly the best.

The premise is an interesting one, the writing is not bad, the story has a nice flow and some very good lines of dialogue – but because I was completely uninterested about the central plot between Ivar and Alaida I firmly sit on the fence for this series.

Notable quotes/ Parts: When Ivar as an Eagle greets his first-born and is relieved to find out that the kid is not an eagle. The friendship between Ivar, Ari and Brand.

Additional Thoughts: want to see for yourself what Immortal Warrior is all about? We have one copy to give away to a lucky winner – just leave a comment on this post answering the question: if you were to be cursed into becoming an animal during the day, what animal would you rather be? Contest runs until Wednesday 4pm Pacific Time, when the Sorting Hat will pick a winner.

Verdict: The series has a lot of potential which book one failed to meet specially with regards to the romance. What is good though, is just about good enough to keep me here for the next round.

Immortal Warrior comes out on the 4th November.

Reading next: Phenomenal Girl 5 by A. J. Menden