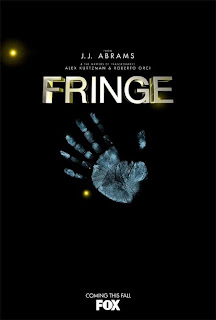 Yesterday evening, this eagerly anticipated new J.J. show had its ninety-five minute debut on FOX. Billed as “paranormal science meets The X-Files (from the creator of Alias and LOST!)”, the expectations for Fringe were pretty high–and, for the most part, Fringe delivers. This pilot, while nowhere near as awesome or classic as those of The X-Files or LOST, is still pretty solid fare and so far is my pick for best Fall TV pilot (to be fair, that really ain’t sayin’ much).

The first scene opens on a flight transversing the Atlantic on a route from Hamburg to Boston, and there is some rough turbulence (are we on Oceanic Air flight 815? Did I wander into the wrong show?! Kidding). One particular passenger is sweating profusely, clearly freaking out. He pulls out a needle and gives himself a shot–presumably of insulin. Turns out, the shot was full of a different chemical cocktail–and sweaty nervous guy’s skin starts to blister and disintegrate, along with everyone else on the plane. By this point, I am thinking to myself “Siiiiiiick!”. Cut to opening credits, which are kinda ho-hum, but I’m stoked to see that the very talented Mr. Michael Giacchino is the series composer. 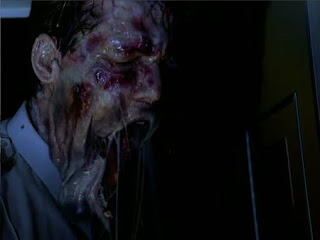 The pilot gets liquified.

And then we get to the meat and potatoes of the episode. Agent Olivia Dunham is a pretty blonde but also a serious FBI agent, summoned out of a motel bed (where she and fellow Agent John Scott have been getting freakydeaky in a hush-hush romance) to Logan International on the case. Olivia becomes the Bureau’s formal Liason to the big dogs: the Department of Homeland Security. Reporting to Agent Phillip Broyles, who doesn’t seem to care much for Agent Dunham, she is sent on an errand mission to check out a lead at a local storage facility.

Olivia and Agent Scott (her lover) go to investigate together, only to find a secret lab in one of the storage units, and a suspect who is identical to sweaty-insulin-face melting dude on the plane. With Agent Scott in pursuit, the suspect takes off running and detonates the storage facilities. Olivia is thrown clear and knocked out, but Scott isn’t so lucky–he’s been showered with whatever chemical compounds the suspect has been brewing, and Agent Scott is slowly turning into a transparent blob, ala the poor souls on the airplane.

Olivia, not ready to lose the man she loves, goes on a hellbent mission to find anyone that can help. Using the nifty Bureau database and using search phrases like “skin + disintegration” (really, who thinks of these retarded search phrases on tv shows and movies???) she immediately finds the one man who can help her, a Doctor Walter Bishop (who, according to the FOX character press release, is “our generation’s Einstein”). Dr. Bishop performed extensive experiments in “Fringe Science” back in the late 1970s and was incarcerated for his use of humans as guinea pigs–only he was found mentally unfit to stand trial, and thus thrown into a psychiatric ward. In order to get his help on the case, Olivia flies to Baghdad to find his next of kin–his SUPER!GENIUS (we’re talking 190 I.Q.) son, Peter Bishop to get her a session with his father. After some serious bluffing, Peter comes back to Boston and they get crazy Dr. Bishop out of the slammer and back into his old Harvard basement lab to figure out how to help Agent Scott. Doctor Bishop says he cannot synthesize an antidote until he knows exactly which chemicals Scott was exposed to, and their precise amounts–and unfortunately the only guy who knows what was in the storage units is their intrepid suspect, and only Scott saw his face. Enter Dr. Bishop’s groovy ’70s research–he tells Olivia she can converse with John in his “dreamstate”, but it will involve inserting a metal rod into her head while she’s hopped up on LSD and floating naked in a rusty tank (exactly why she must be in her bra and undies, floating in a tank is a mystery to me. Hey, we got Kate in her undies in the LOST pilot, and Scully stripping down in The X-Files pilot, so I won’t complain!).

Of course, the wide-eyed Olivia agrees, and the dream-meeting is a success. Very shortly thereafter, she identifies the suspect, leaps from building to building in his pursuit and throws him into custody with some help from Peter. After some tough interrogation, he gives up the information, and Dr. Bishop is successfully able to synthesize a cure for Agent Scott–who at this point looks like Kevin Bacon in mid-Hollow Man metamorphosis.

Agent Dunham’s investigation also leads her to multi billionaire and corporate tycoon William Bell–Dr. Bishop’s old partner. His company, Millettos Bioscience–oops, I mean Massive Dynamics, is a pioneer in some crazy cutting edge science stuff. When Olivia pays headquarters a visit, she talks to Nina Sharp and sees first-hand the crazy cutting edge science stuff as she reveals her robot arm. Nina asks Olivia if this is all part of “The Pattern”–later, Agent Broyles explains that seemingly at random, paranormal, fantastic phenomenon has been appearing across the globe. Missing children reappearing years later without having aged a day, high pitched buzzing signaling an oncoming tsunami, etc. Following a nice twist to the end of the episode, Agent Dunham is asked to lend her talents to Agent Broyles’ cause, setting the premise for the rest of the season’s investigations… 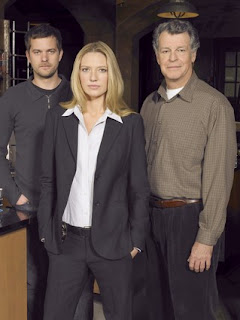 From L to R: Joshua Jackson as Peter, Anna Torv as Olivia, and John Noble as Dr. Bishop

So…what did I think? First and foremost, there’s the main cast. Agent Olivia Dunham, played by Anna Torv, is the lynch pin for the series as the lead character. I liked that The Powers That Be (“TPTB”) went with an unknown actress, and I like that she isn’t super glamorous. The character of Olivia, however, is just a tad bit ridiculous. She’s the ultimate Uber-Agent, the Bureau Liason, jet setting from Massachusetts to Iraq, operating on zero hours of sleep for something like eight days, she apparently has incredible pull at the agency as she is able to get labs reconstituted, cows brought in, mentally insane dudes released, raids called, etc with a snap of her fingers. She has incredible computer skills with her magical Bureau Google Search for wonky skin condition specialists, and then later with her computer generated picture of the suspect from her dream-meeting with Agent Scott. She bounds from building tops and catches perps without hurting herself, OR messing up her hair and makeup. It’s all just a teensy tiny bit over the top.

Olivia’s counterpart, Peter Bishop, is played by fan favorite Joshua Jackson, and his performance has been generally met with praise. Personally, I’d prefer someone else in the role–another lesser known face to match Ms. Anna Torv–and I found his “hey sweetheart” lines and the attempts at comic relief to be incredibly clumsy. He just didn’t work for me. The screaming “hey we have CHEMISTRY!” flashing lights around Olivia and Peter is annoying as well. Not to mention the whole character backstory for Peter: [Olivia Narrates] “Peter Bishop is a GENIUS. His IQ is 50 points north of GENIUS levels. He graduated with a doctorate from MIT at the age of 16 and was a professor of Chemistry. He founded his own oil company at the age of 22. He POOPS RAINBOWS!” Why can’t main characters ever just be good-at-their-jobs-normal-dudes? Why the compulsion to create the SUPERFREAKINGGENIUS! all the time? Yeesh.

Then, there’s Dr. Walter Bishop, played by the great John Noble (aka crazed Denethor from The Return of the King). His performance was wonderful, even if the writing was weaksauce. I much preferred crazy Dr. Bishop’s comic relief to the forced, un-funny wisecracks from his son Peter. Agent Broyles, played by the eerie Lance Reddick is another welcome addition. I loved his role last season on LOST as the shady Abbadon, and he fills out the “Agent X” type of character nicely here. Finally, Nina Sharp, played by the excellently (and so very appropriately) casted Blair Brown of Altered States, was also a delight.

Overall, I thought the plotting was solid if somewhat predictable, and this was a good pilot episode to kick off the new series. Sure it had its kinks and the writing could use a lot of work, but it’s enough to keep me eager to see next week’s episode. I have to admit I was a little disappointed with “The Pattern” as the overarching storyline of this season–it’s seems a pretty thin excuse to keep Dunham and company investigating the paranormal. I guess they couldn’t exactly just create a new sub department of the F.B.I. to investigate the paranormal in Harvard University’s basement…wait a minute, that sounds familiar…*whistles Mark Snow theme* 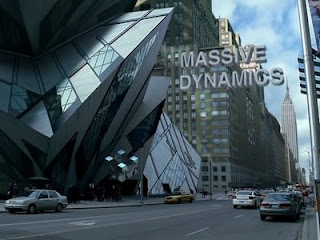 The big bad guys are being set up as Massive Dynamics, which again feels like borrowing–this time from LOST’s Millettos Bioscence/Hanso/Widmore/or Paik Industries. I’d like to see where this goes, but frankly I am hoping for some creativity in the upcoming episodes. Blending old shows is great and all, but I haven’t seen any new spark from Fringe that allows it to stand on its own as opposed to being an X-Files/LOST/Alias hybrid.

Notable Parts: LOST dork that I am, I loved the music of Michael Giacchino in this episode. AND at 1:16, when Broyles is explaining “The Pattern” to Olivia, you may have caught his little story that could possibly be a LOST shoutout! Broyles relates the story of a man in an institution in Madrid, who starts writing down a sequence of numbers, which look like nothing, but in actuality are the coordinates to a top secret government project in the Pacific Ocean. Now, who’s to say those numbers might not have been 4, 8, 15, 16, 23, 42? Hmm?