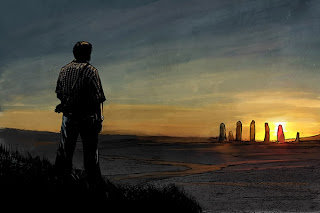 Summary: (from SimonSays.com)
Master storyteller Stephen King presents a revolutionary new form of entertainment: his short story “N.” brought to vibrant life through a series of 25 graphic video episodes. The original series tells the story of a psychiatrist who falls victim to the same deadly obsession as his patient—an obsession that just might save the world!

As part of the marketing campaign for King’s forthcoming collection Just After Sunset, King and the team at Marvel, Scribner, & CBS mobile have produced a series of 25 mobisodes (internet only broadcast episodes) for N., a story in this new collection. Beginning on July 28th, each two minute episode was delivered once each weekday to subscribing mobile phones, or available on iTunes in groups of five episodes. Since I have the patience of an ADHD little kid in a room full of cake, I decided to wait until all the episodes had aired, then coughed up the $5 to get all 25 episodes on iTunes. (Ok, me not knowing about the series until they were almost finished had something to do with it. Regardless, I watched the whole thing in one sitting–which I recommend as opposed to the two minute teaser torture this would have otherwise been!) Called “graphic videos”, N. is shot in the intriguing pan and scan technique, with voiceovers and an original score, creating a sort of living comic book.

And, as you’ve probably guessed, I loved every second of it.

N. is the story of an obsessive compulsive patient and his psychiatrist, who falls victim to the same disorder. The first episode opens with a letter. A woman is writing to an old friend named Charlie about her late brother, Johnny, and his supposed suicide. She believes that there is more than meets the eye with his death, and reveals that she had found a box labeled “Burn This!” in her brother’s home. Inside the box, there was a manuscript; her brother’s notes concerning his last patient, named “N.”

The next few episodes detail N.’s casefile–flashing back to Dr. Johnny’s office. N. is a manic, obsessed man–we see him adjusting objects to make them “safe”, making up rhymes, and counting, endless counting–because the fate of the world depends on him. He tells the doc that his problems began back in August of the previous year, in a place called Ackerman’s Field. He went out to the field to take pictures, and stumbles across a circle of seven stones. When he raises his camera to take a picture of the circle, however, he sees that there are eight stones, not seven. Puzzled–afraid–N. walks up to each stone and touches them, examining each one, trying to reconcile the missing stone. On each surface, N. sees the face of a monster–although it could be a trick of the light. Suddenly, N. feels an overwhelming fear and he runs back to his car. When he turns around to look at the circle one last time, he sees something in its center. A darkness that has nothing to do with cloud shadows, but a monster–and it turns and grins hungrily at N. He runs home, locks his doors, and his obsession with numbers begins. He counts his doors, his books and objects; he makes sure that everything is in even increments–six is a fix, unlike five or seven. N. relates to Johnny that the circle is a gate to another world, inhabited by monsters and darkness–and the weight is on his shoulders to keep the monsters out, by counting and protecting.

Meanwhile, Johnny’s manuscript narration continues–N.’s mania is typical of his disorder, including the delusion that the weight of the world rests on his shoulders. When Johnny asks for the pictures N. took, N. responds that none of them came out. Even when he returned to the field with a digital camera, the stones “fried” the pictures. N. tells Johnny that a few months pass, and in the winter, his fears and obsessions receded. He was able to sleep at night.

Until summer. The nightmares returned even darker than before–and N. receives an envelope, with only a key inside, with the initials “AF” attached. Ackerman’s Field. Shortly thereafter, N. dismisses the doc, telling him he’s sorry and that there’s nothing else to do. He may have already infected him. A week later, N. commits suicide. 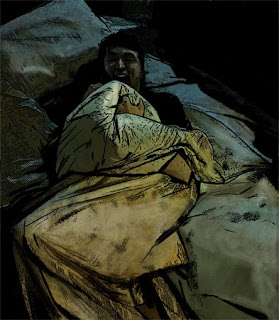 The narration resumes with the woman’s letter to Charlie. She talks about how her brother, Johnny, became obsessed with N.’s death, even going to his funeral…and then eventually to the dreaded Ackerman’s Field. The story flips back to Johnny’s narration, and his own path to N.’s fate.

In true Stephen King fashion, N. is a story that creeps and lingers. For any other Dark Tower junkies, there are a few connections here–the stone circle as a place where the fabric of reality is worn down, a thinny. The obsession with numbers is also familiar territory–although it’s not nineteen this time, but sevens and eights. The pace of each episode is frantic, almost as manic as the obsession that sweeps each of its narrators–but again with classic King style and flair. Naysayers can say what they want about King’s stories, but I have always been a fan of his similes and imagery. At one point, N. tells Johnny that the “bad” numbers (odd numbers)–like the seven stones in the circle–let the monsters bleed through to their world, like wet vomit through a paper bag. This is right up there as one of my favorite images from King’s work, next to the rat gnawing away, frantically trying to escape the cage of sanity in Cell.

This supernatural horror story is a simple one, in the tradition of chain letter terror re-made popular in books and movies such as The Ring. It’s also left nicely unresolved at its end–which is something I generally like in horror stories, and it fits even better here as Marvel will be doing a comic book adaptation/continuation of the series in 2009! 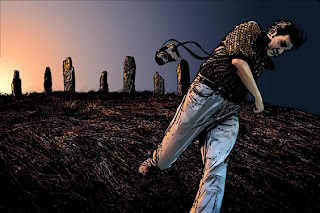 So far as production value goes, this series is pretty damn well done. The panning method of shooting the episodes is incredibly effective, paired with the provocative art and stellar voiceovers. What could easily come across as cheesy–the image of the monster from the other side of the stone circle–is instead disturbing, and deliciously creepy. I loved the color scheme for the episodes–the darker washes of burnt oranges and grays, especially with the more lifelike, photographic quality to the pencils. Hopefully the same art team will be manning the comics next year.

The only quibble for me was with the score. Initially, the music came across as overly loud and almost TV melodramatic. The two minute segments didn’t help out any as each episode seemed to end with a blaring crescendo to maintain that air of tension. However, as the episodes went on, I found myself more susceptible to the music, making me feel eerie and uncomfortable with the loud sounds and discordant instruments. Perhaps this was the intent of the original score–to cause this shrieking discomfort of the viewer, keeping the audience terse, on edge. Certainly, it worked for me.
The same can be said for the voice pacing of each episode–as there are only two minutes per show, the characters tend to speak quickly. Not that this is a bad thing either–they are always coherent and it is easy enough to follow once you get used to the tempo. Again, the frenetic voices of the characters only adds to the manic atmosphere of the story, and all the voice actors do a wonderful job.

Notable Quotes/Parts: Here’s the widget–where you can check out episodes, interviews, etc:

All the episodes are available for free online at the official site: Nishere.com

Verdict: N. is a solid, delightful foray into the mobisode/web-based marketing field. I highly recommend it for any horror fans, or comic book fans. (It goes without saying that Stephen King fans should immediately jump on board and give this series a shot)