I will start by saying that I’m in love with this miniseries and watching it for the past 4 weeks was the most fun I had in ages!

Lost in Austen was a Miniseries with 4 episodes of one hour each that aired in September here in the UK. I saw a couple of commercials before it aired and being a fan of all things Price and Predudice-y they made me curious enough to watch at least the first episode and I was hooked from the get go. I was completely surprised by the quality of the show since it was produced by ITV, a channel that is not exactly known as showcasing top quality TV: ITV BBC is not.

Amanda Price lives in present-day London, working at a bank, dating a guy who is far from being Prince Charming. Amanda’s boring life is only made bearable by escaping into her favorite book: Pride and Prejudice by Jane Austen. She reads it pretty much every day, she knows all the lines, all the plot developments and she LOVES the love story between Mr Darcy and Elizabeth Bennett. 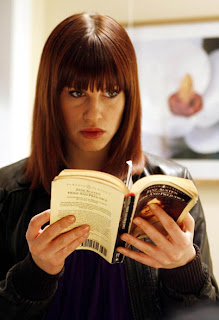 Amanda and her worn copy of Pride and Prejudice

One day, an unsuspecting Amanda walks into her bathroom and finds…..Elizabeth Bennett! It turns out, there is a door that leads from Amanda’s bathroom into the Bennett’s house. A curious Elizabeth is dying to know more about this freakish world whereas Amanda is of course, dying to finally be able to see for herself the world she has always loved. Yes, she thinks she is going crazy but she can’t fight the excitement of seeing the things she dreams about, first hand!

They decide to swap places and Amanda walks into the past whilst Elizabeth remains in London. Amanda is immediately welcomed in the Bennett’s household and she introduces herself as Elizabeth’s friend, Miss Price from Hammersmith and explains that Elizabeth will be spending sometime at her house so that she can write a book.

Ok, so it requires a lot of suspension of belief: not only they accept this strange woman with her strange clothes, weird hair and even weirder use of language with open arms but they also show little concern about Elizabeth’s whereabouts. HOWEVER, if you can buy that there is a DOOR between a London flat and a fictional attic out of a book, I would say, believing in all the rest comes easy enough because the acting is good and the situation is so funny and you can’t help but to be intrigued and excited about how things will unfold.

Amanda soon enough realises she walked into the story just when Mr Bingley is about to make his first appearance. As any Pride and Prejudice fan will know, this is when Mr Bingley and Jane first meet and start to develop feelings for each other. And this is where we first get a taste of what to expect from Lost in Austen because Mr Bingley hardly notices Jane and falls for….Amanda! 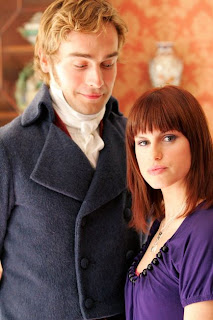 Amanda freaks out, and decides to set things straight by trying to make Bingley become interested in Jane, but she fails (at least at first) and she starts to seriously muck things up and the worst happens when Elizabeth is not there to meet Mr. Darcy at that ball where they first dance and who ends up dancing and exchanging barbs with the man is Amanda herself. 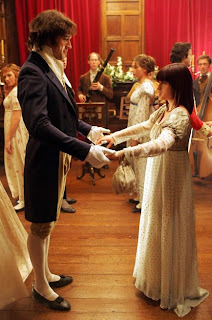 Ai, ai, ai. Get away from Darcy, Amanda! He belongs with Elizabeth, Damn it.
Little by little, Amanda unwillingly takes Elizabeth’s place in the household by becoming a close confidante of Mr Bennett (who was one of the best characters here and in the book), best friends with Jane and by falling in love with Mr Darcy who, be still my heart…. reciprocates the feeling.

I can’t begin to express how close I was from having a heart failure every time something that is supposed to happen doesn’t, only to be replaced with a surprising twist, the first major one being that Jane MARRIES Mr Collins! 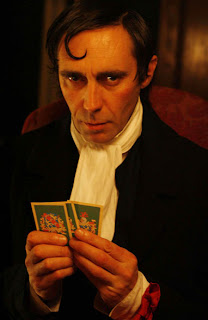 Mr Collins: the epitome of ew.
Oh noes, poor Mr Bingley (who in this adaptation is such a sympathetic character. I who, usually have eyes only for Mr Darcy, fell a little bit in love with Mr Bingley here. He was quite simply, adorable).

Lost in Austen is more than a retelling of Pride and Prejudice because it is based on the assumption that the characters have a life of their own, going much beyond the pages of the book or beyond what Jane Austen has ever written. A villain that turns out not to be a villain, a female character who turns out to be gay, a hero that is much more proud and stubborn that we ever thought are only but a few of the surprises.

I am pretty sure that there are purists out there that will scream “Sacrilege” and think that ITV has destroyed Pride and Prejudice. I for one, think it was refreshing, funny, and unpredictable – I never knew where the show was going to and if Amanda would be able to set things straight? Or would she end up with Mr Darcy and erase from history a love story that has been going on from centuries? And how would I feel either way?

There were some cheesy and melodramatic dialogues and the writers may have missed the opportunity to develop further the differences between 21st century and 19th century but in the end, the series is not to be taken too seriously.

Lost in Austen, was inventive, always surprising, with good acting, amazing locations and cinematography, funny and entertaining and with a fantastic Mr Darcy too boot. I was uncertain of how things would end up to the very last minute of the show. And the way it ended? It surprised me, delighted me at the same time that it devastated me. 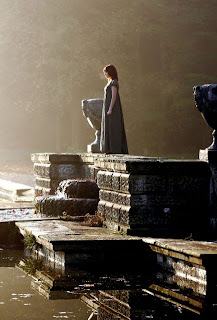 Location and photography were amazing 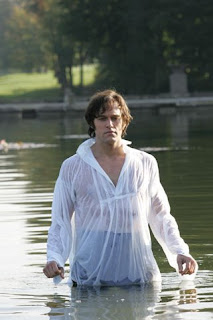 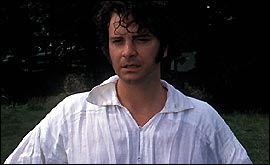 Even though I was bipolar with the finale, honestly, I could not ask for more. Even more surprising was how much Dear Partner loved it! In his words: “This is the best series the British TV has ever produced”. I wouldn’t go THAT far but I wholeheartedly recommend it.

And here is a taste: first time Amanda meets Darcy.