I Know It’s Cheesy, But…

And so I’ll kick it off with our first cheesefest post. “I know it’s cheesy, but…”

So, these aren’t exactly high class Cannes Film Festival winners, but I have an enormous soft spot for the teen actress (is she even a teen anymore? Probably not. I digress). My personal favorite? She’s the Man, costarring that hot guy from Step Up, Channing Tatum. 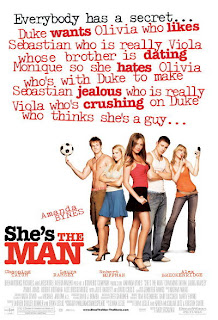 In the same line as 10 Things I Hate About You, She’s the Man is a teenybopper take on Shakespeare, but this time it’s Twelfth Night–which, coincidentally is my favorite of Willy’s comedies. In a nutshell, the story follows Viola, twin of Sebastian. Sebastian is a slacker in school and totally dedicated to his music–so instead of starting class at Illyria when he’s supposed to, he gets Vi to call him in sick while he trollops around London with his band. Viola is a star soccer player, and her school has just cut the girl’s soccer team–and, the boys team head coach is a dick, saying that the girls can’t try out for the guys team. Viola’s boyfriend (played by the guy in Step Up 2, if you can believe that!) is a complete toolbag, laughing at Viola and telling “Honey, you’re just not good enough.” Ahh, girl power movies–in limited doses and with a strong side serving of self-deprecating humor–are just what I want to see sometimes.

So. When Sebastian tells Vi to call him in sick for the first two weeks, Viola instead decides to masquerade as her twin bro, to try out for the Illyria boys team, and then kick ass in the big rival soccer showdown in 2 weeks, proving that she was SO good enough. At the same time, Viola forms a huge crush on her roommate Duke Orsino (Channing)–who also happens to be captain of the soccer team, and who also is in love with Viola’s lab partner, Olivia. In exchange for soccer tips, Viola promises to put in a good word with Olivia for Orsino. Unfortunately, Olivia is totally digging Viola (disguised as Sebastian). Add Sebastian’s girlfriend Monique into the mix, and we’ve got a great comedy. Of course, in the end, everyone ends up with who they deserve, Viola is unmasked as the chick she really is, and manages to show up her ex on the soccer field. 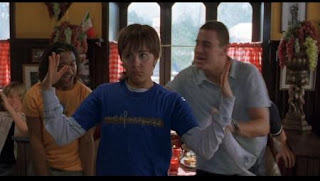 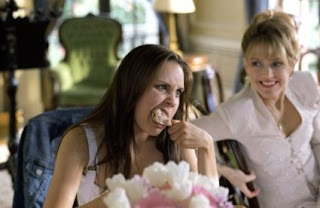 So…what sets Amanda Bynes apart from other teenybopper actresses? In my opinion, it’s the deadly combination of the fact that she is hot, and yet totally willing to make a complete ass of herself. And I’m not talking about half-assing it cheap physical comedy ala Jessica Alba in Good Luck Chuck *shudders* No, Amanda Bynes goes balls to the wall, funny faces, voices, bad costumes, physical humor, you name it (in the same vein, Anna Farris does this beautifully as well–I’m not talking Scary Movie. I dare you to watch Just Friends and tell me that shit isn’t funny). And it totally works. Any time an Amanda Bynes movie is on, I have to watch it. I’ve even hooked my boyfriend on them. Now THAT’S a true test.

So, I’ve spilled! Anyone else have a guilty pleasure film to share??